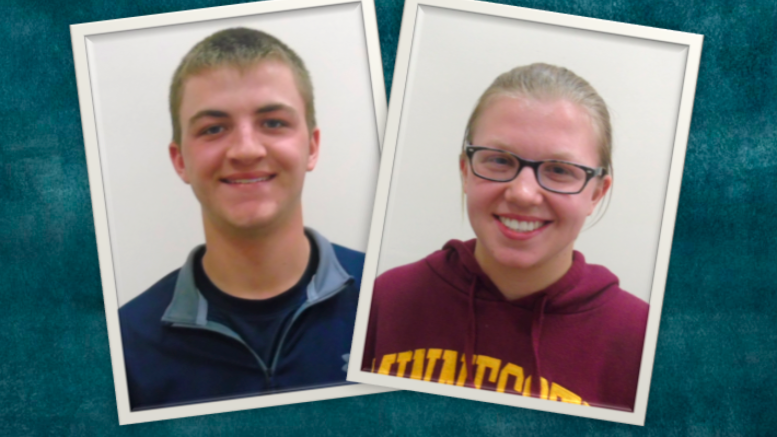 The Community Foundation of Muncie and Delaware County, Inc., has selected the recipients of the 2016 Lilly Endowment Community Scholarships, an award that grants full tuition to any accredited public or private college or university in Indiana. The Lilly Scholarship also covers fees and provides an annual stipend for required books and equipment.

The recipients of the 2016 Lilly Endowment Community Scholarship are Nicholas Bantz and Anna Groover, both from Delta High School. They were chosen out of an applicant pool of 86 impressive candidates from high schools across Delaware County.

“The Lilly Endowment Community Scholarship is one of the most prestigious scholarships in Indiana, and Nicholas and Anna are very deserving of this award,” said Kelly Shrock, President of The Community Foundation.  “Having tuition, fees, and books funded for four years of college takes a huge burden off of these young people and their families. Just as importantly, we know that being named a Lilly Scholar is an honor these students will carry with them for the rest of their lives.”

Nicholas Bantz, a senior at Delta High School, plans to study biology or chemistry on a pre-optometry tract at either Ball State University or Indiana University. He is the son of Rick and Carol Bantz. Nicholas has a 4.31/4.0 grade point average and is ranked first in his class. Nicholas has been active in student council and National Honor Society. He is also the treasurer for his class. He has had several leadership positions within his school, and has been active as a community volunteer. Nicholas is a four-year member of both the baseball team and the tennis team, where he served as team captain this year.

Anna Groover, a senior at Delta High School, plans to study English and political science. She is the daughter of Mark Groover and Melanie Cabak. Anna has a 4.27/4.0 grade point average and is ranked third in her class. She has served on student council, is a member of National Honor Society, and is class secretary. She is a four-year member of the swim team and tennis team. Anna is also an active community volunteer. Anna has won several regional and national awards for her writing including the 2015 Scholastic Art and Writing Awards’ Gold Medal in Journalism.

In selecting Delaware County Lilly Endowment Community Scholars, consideration is given to student activities and achievements, community and civic service, academic ability and potential for leadership. After the field of school nominees was narrowed to two, the finalists’ names were submitted to Independent Colleges of Indiana, Inc. (ICI) for the selection of the recipients.

ICI is a nonprofit corporation that represents 31 regionally accredited degree granting, nonprofit, private colleges and universities in the state. The scholarships are a result of a statewide Lilly Endowment initiative to help Hoosier students reach higher levels of education. Lilly Endowment Community Scholarships have been awarded to 142 students across Indiana in 2016.