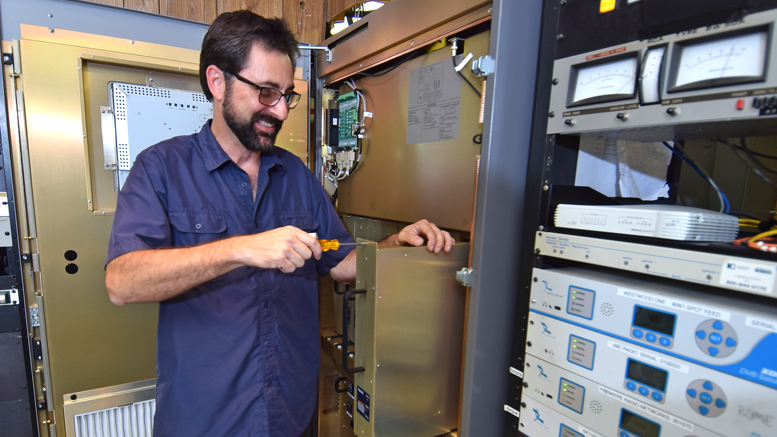 Remember the huge ice storm in January of 2005?
Remember when power was out for most of East Central Indiana? For days on end?
Remember when one of the few sources of accessible up-to-date information to keep you informed about that storm came through your local radio stations? Among others, you can thank a radio engineer for that. An engineer like Sean Mattingly. 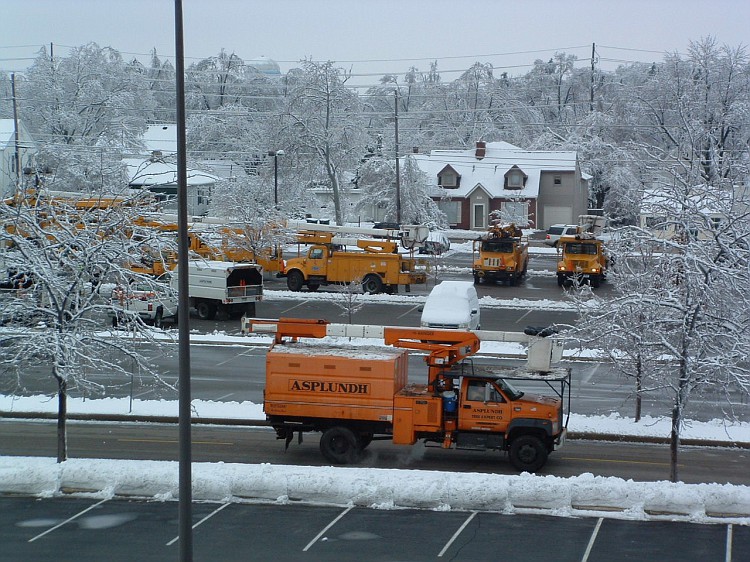 The Ice Storm of 2005. Electrical workers from across the country at their command post in a BMH parking lot. Photo by: Mike Rhodes

Sean is the broadcast engineer for all of the Woof Boom radio stations. (WLBC, WERK, WMXQ, WBKQ, WHBU and WXFN.)

He is among 20 radio and television engineers in the state to recently receive the inaugural BROADCAST/IT FIRST RESPONDER credential awarded by the Indiana Broadcasters Association.

The credentials were presented to 20 engineers on October 6th at the Indiana Broadcasters Association workshop held at Banker’s Life Fieldhouse. Sean participated in two FEMA courses focused on managing emergency incidents and their command structure.  He then attended a one-day course with FEMA and Indiana Homeland Security conducted at Ivy Tech in Peru, IN.

The certification is part of a program made possible by the Indiana Legislature when they passed a law allowing broadcast engineers to earn first responder status provided they worked directly with the Department of Homeland Security to take and pass the training.  Gwen Piening, President and CEO of the Indiana Broadcasters Association, worked directly with Arvin Copeland of Homeland Security to establish the training, assuring each engineer was properly trained.

The Legislation was written to assure engineers would have access to station transmitters in cases of emergencies (like the Ice Storm of 2005) when it might be necessary to close off areas of land and/or roadways. Given the training and credentials, the engineers who have completed the training to date will have access to broadcast station transmitters to assure the public is kept aware of various situations even though conditions may be keeping others from having access to various geographical areas.

And that huge ice storm in 2005? Sean documented the storm on a webpage. You can view it here…

Let’s hope this winter is a mild one.
But if it isn’t, Sean Mattingly will see to it that you’ll stay informed by being able to hear the radio.