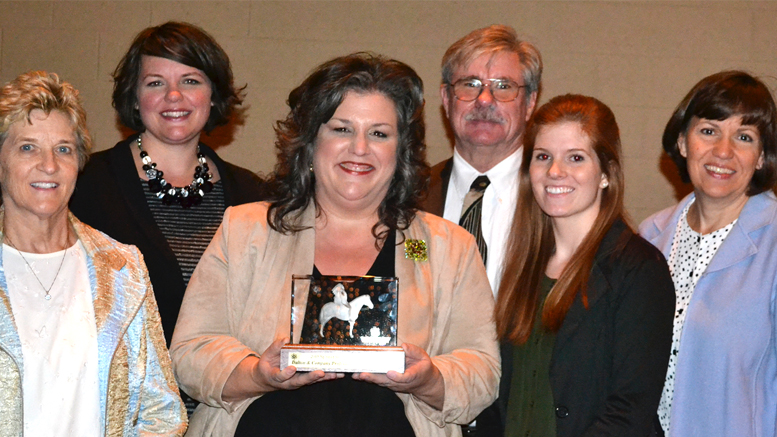 By: Tammy Pearson and Sue Godfrey—

Juli Metzger, a 30-year news veteran who now teaches for the Department of Journalism at Ball State and oversees a new $4 million student-run newsroom for the College of Communication, Information and Media, received the Ball Brothers Foundation’s John W. and Janice B. Fisher Governance Award for volunteer work as a board member for Project Leadership and the Boys & Girls Club of Muncie.

Tammy Pearson, Executive Director, for Project Leadership, accepted the Chamber’s Outstanding Contribution to Education award for the work of the organization to get students to and through their post-secondary educations. Project Leadership expanded into Delaware County in 2008 and raised the number of local students qualifying for free college tuition through the state’s 21st Century Scholars program from 28 percent to more than 80 percent on average. To help them reach college, 150 high school and college students are participating in Project Leadership’s mentoring program. The goal: Degree completion. More than $8 million has been identified for local high school seniors in financial aid labs to help make college more attainable. This year, 69 7th and 8th grade Muncie boys participated in Project Leadership’s new ICE League which ties the amount of game time students earn on the court with the quality of their academic performance in the classroom.

The John W. and Janice B. Fisher Governance Award was presented to Metzger by Jud Fisher, president and chief operating officer of the Ball Brothers Foundation in memory of his grandparents. The honor comes with a $10,000 award for the nonprofits Metzger serves – Project Leadership and the Boys & Girls Club. In its fifth year, the honor is Delaware County’s most prestigious award available to nonprofit board members. “For the first time in our history, the award goes to someone who was nominated by two separate nonprofits,” Fisher said.

“BBF received incredibly strong nominations this year and Juli Metzger represents what makes all of the nominees so important: an unwavering commitment to strengthening our community through giving of time and talent,” said Fisher. “Juli has made a lasting impact not only on Project Leadership and the Boys & Girls Club of Muncie, but also on hundreds of youth served by these organizations who will be the future leaders of our city, state, and nation.”

The unique timing of both awards, received on the same night, is symbolic, Pearson said. “An organization’s programming, community impact and sustainability of that work is interlocked with the strength of its board leadership. In reflecting on the dual awards, Pearson said: “While the Project Leadership team is commended for its caring, committed and quality approach to programming, Juli is applauded for the steady leadership she provides to our organization.”

Pearson and Metzger have worked together on projects for nearly 20 years. Each had long careers in newspapers before they teamed up in Muncie. Shortly after Metzger, a Muncie native, returned to her hometown in 2005 to be publisher of The Star Press she recruited Pearson to be the top editor. Pearson, who is a graduate of Ball State University, left in 2006 to follow another passion – education and nonprofits. Metzger left the newspaper in 2009 to be Executive Editor of Digital for the Indianapolis Star and in 2011 she and her husband, John, started their own company, The JMetzger Group, a content marketing and niche publishing business with magazine titles in East Central Indiana. Metzger joined Ball State in 2011 and was named Coordinator of Unified Media in 2012. She has a bachelor’s degree from Ball State’s Department of Journalism and a master’s degree from the Center for Information and Communication Sciences, and is in that program’s Hall of Fame.