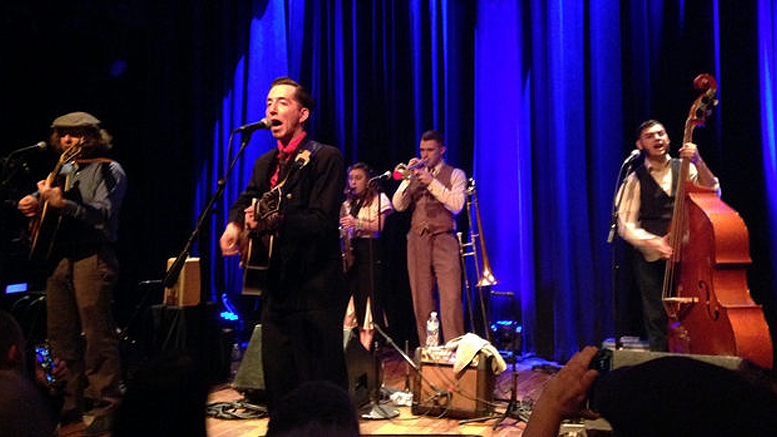 Muncie, IN – Rounder recording artist and Americana/country/swing musician Pokey Lafarge will perform in a FREE outdoor concert as part of the 2016 Muncie Three Trails Music Series. The concert will take place at 7:00 PM on Saturday, September 3rd at Canan Commons (500 S. Walnut St.) in the heart of downtown Muncie, IN. The Indianapolis-based Half Stepsisters will open.

Pokey Lafarge and his seven-piece band play a unique mixture of Americana, hot swing, early jazz, country blues, and traditional folk and country, all wrapped around lyrics that tell vivid short stories from a Midwestern perspective. Stephen Thompson of NPR says that Lafarge’s music “…evokes the old-timey spirit of a thousand 78 RPM records…but his albums never feel like cheap exercises in nostalgia…because Lafarge directs his old-fashioned sensibilities in the service of sharp, infectious new material.”  And as Mr. Lafarge, himself, states, “I’m born and raised in the Midwest, and my family’s been here for generations. This is where I’m from, how I think, and that’s reflected in the music I make.”

In addition to being signed to Rounder Records, Mr. Lafarge has also recorded for and toured with Jack White (of the White Stripes) and has appeared multiple times on Prairie Home Companion, and The Late Show with David Letterman.

The Muncie Three Trails Music Series is unique in the state of Indiana as the only annual music series featuring current recording artists of national stature and critical acclaim in FREE public concerts. Other 2016 series artists are bluegrass greats The Grascals, delta bluesman Tab Benoit, and legendary jazz guitarist John Scofield. Full information about the series and all 2016 artists can be found at www.munciethreetrails.com.