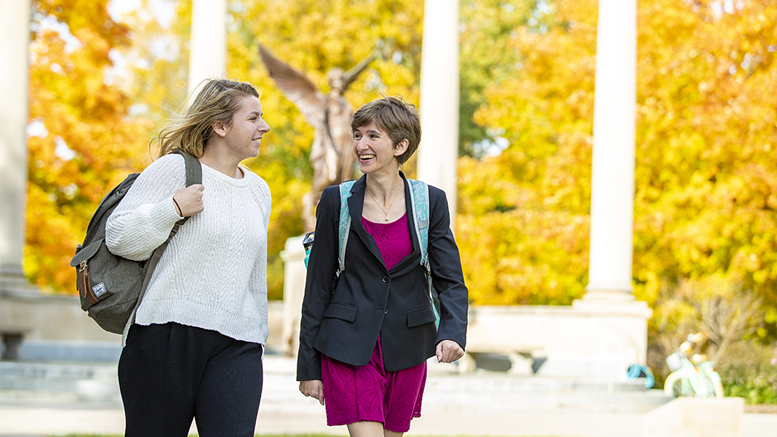 Muncie, Indiana – One Ball State University student wants to solve ecological issues by focusing on water systems while a classmate aspires to help protect the world’s endangered species. Their determination is being recognized with a major scholarship that will help them reach their goals.

Ball State undergraduates Maddie Clark and Kaitlin Gavenda are in their senior year of college as winners of the prestigious Udall Scholarship, a $7,000 award that celebrates student leadership, public service and commitment to issues related to the environment or to Native American nations.

Every year, the nation’s top 50 undergraduates interested in tribal and environmental issues earn the Udall Scholarship with 34 scholarships designated in the environmental category.

Clark, a senior landscape architecture major from Shelbyville, Indiana, is interested in helping create ecological infrastructure that connects people to the environment in urban settings, focusing on water systems and the impact of climate change.

“This passion began when I started to see landscape architecture less as a future job and more as an opportunity to help weave a new narrative about how communities can restore their ecological and cultural value,” said Clark. “Ultimately, I am passionate about tackling our most degraded environments to create livable and dynamic communities that suffer most from environmental disasters.”

Gavenda, a senior biology major from Fenton, Missouri, is driven to protect endangered species because of their important role in maintaining healthy ecosystems.

“Many species have been put at risk of extinction due to human activities, whether it be directly from the destruction of habitats and hunting, or indirectly through climate change,” Gavenda said. “The protection of one vulnerable species protects the habitat it lives in, and thus the other species dwelling in that area.”

In addition to financial assistance, the scholarship brought all 50 awardees together Aug. 7-12 in Tucson, Arizona, to participate in the Udall Scholar Orientation. Clark and Gavenda networked with fellow scholarship recipients, Udall alumni and professionals working on environmental issues and worked on a case study with fellow Udall Scholars.

“Our case study evaluated water allocation in a California watershed,” Gavenda said. “We had several talks about negotiation, water regulations and Indian law to help us with this process. Our proposal for a solution was accepted by a board of experts.”

While Clark and Gavenda’s interest in and dedication to solving ecological issues helped earn them the scholarship, their involvement on and off campus contributed toward the distinction.

Clark recently spent five months in New York City at SCAPE, a landscape architecture firm committed to connecting people back to their environment and creating dynamic and adaptive landscapes to make communities more resilient to climate change. She worked on several projects that focused on rethinking current infrastructure.

On campus, Clark is the president of Emerging Green Builders and former president of the GROW campus garden. Her volunteer activities include the 8-Twelve Coalition, and her independent research project that examined the impact of the politicization of American  infrastructure has taken her to the U.S.-Mexico border.

As for Gavenda, she serves as the vice president of The Wildlife Society on Ball State’s campus. Also, she has researched how forest management affects bats while serving as an intern for Ball State  and a technician with Missouri Department of Conservation.

Gavenda has volunteered with researchers during college, helping them with data collection for mist netting both birds and bats. She also started two banding stations near Ball State’s campus, part of Project Owlnet, a nationwide effort to learn more about Northern Saw-whet Owls. Also, as part of her senior honors thesis, she has collected two seasons of data on how prairie-based rodent populations change after a prescribed burn, an intentional torching of grasslands used in order to increase biodiversity.

Clark and Gavenda are thankful for the opportunities that the Udall Scholarship, which is fueling their desires to take on the ecological problems dearest to their hearts.

“To be selected to receive this scholarship among such a high caliber of people is very rewarding and humbling,” Clark said. “With the financial assistance this scholarship offers, I can focus on learning about and addressing the ecological problems I am most interested in within the Muncie, Indiana, community and around the country.”

Barb Stedman, Ball State’s director of national and International scholarships, is impressed with both students.

“Ball State has had 12 Udall Scholars and seven Honorable Mentions over the past 13 years,” Stedman said. “Our students’ consistent success in this competition is a testament to their commitment—and Ball State’s larger commitment—to addressing environmental and sustainability issues.”