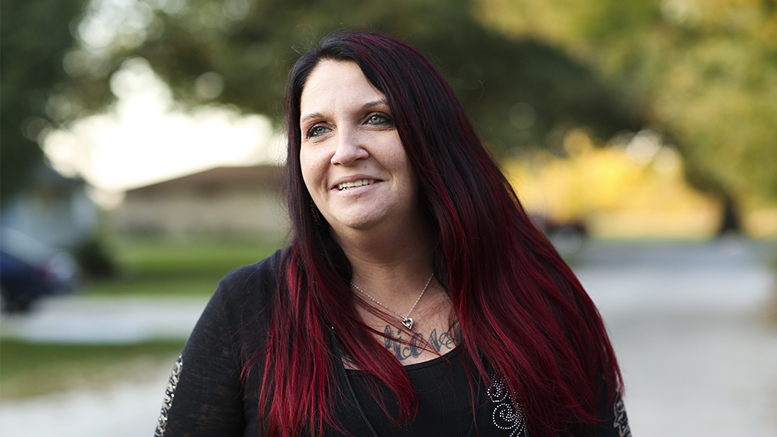 Muncie, Indiana—Brian and Rhea Graham have spent the last three years pushing aside personal demons and life’s roadblocks to become very public advocates for recovery and redemption. Both recovering addicts, they’ve done it even as they have faced the financial constrictions that keep them just shy of qualifying for federal assistance.

They are what United Way calls ALICE, asset limited, income constrained but employed.

Today, Rhea takes on one more role – as a spokesperson for A Better Way, the first place she turned to when she sought shelter for herself and her children. A Better Way runs one of 28 non-profit programs in the county supported by United Way because it holds a key to ending the cycle of generational poverty, a laser focus of UWDC.

“They were instrumental in my recovery,” Rhea says, looking back. “I had no idea what that place was. It was the first time ever in my life that I felt safe.”

Rhea describes her childhood as abusive, and says the abuse continued into her adult life, until she married Brian. “When I arrived at A Better Way that night, for me, that was a defining moment. Finally, I had my life and it was mine.”

When they’re not working, Brian and Rhea are volunteering in Muncie’s growing addiction recovery community.

On this day, the Grahams are still reeling from the adrenaline rush after helping more than two dozen people into recovery. They were liaisons to addicts who participated in the county’s first ever “Surrender to Freedom” program, which vacates active arrest warrants. Drug addicts had the opportunity to turn in drug paraphernalia and/or seek rehabilitation help. On this day, 25 warrants were vacated and 19 chose to get help. “Surrender to Freedom” was an event in cooperation with the Delaware County Prosecutor’s office. Much of Delaware County’s drug recovery community was present, Rhea said.

“We have to be merciful even if they don’t deserve it,” Rhea said. “It’s the only thing that will break the cycle.”

In 2016, the couple was the subject of a Ball State University immersive learning project called, Unmasked: The Stigma of Meth. The 15-week project resulted in a 30-minute documentary, 40-page magazine and website with unique content examining addiction in Delaware County.

Since then, the Grahams have taken on a high-profile role in the addiction community. “The compound effect is mind blowing, the value of one addict helping another,” Rhea said.

“People knew us from the documentary,” she said. “Our contribution now is to be out front, meet and greet with people so they know it’s safe to go inside (where the police are waiting). They trust us. And we know we can help because we see ourselves in them.”

Another side to the Grahams is their very real struggle to make ends meet. Both work full-time jobs but they’re combined salaries are not enough to cover life’s demands, including care for Rhea’s 21-year-old daughter who is awaiting back surgery for severe scoliosis. She also has DiGeorge syndrome, which means she’s missing the 22ndchromosome and with it comes mental delays and physical limitations.

A pickup truck outside their home sits with tires deflated. It’s not running and there’s no means to get it running anytime soon.

Today, nearly half of Delaware County households live in poverty or are one crisis away from it. It’s a vicious generational cycle. These working families face obstacles in reaching health, education, and financial stability.

To conquer generational poverty, UWDC has adopted the bold goal that by 2024 all third graders will be reading at grade level—the single greatest indicator of a child’s success in school and life. Campaign contributions will be strategically invested in local programs to help put children on a pathway out of poverty through better educational outcomes.

A Better Way provided shelter and support when Rhea and her children needed it most. A Better Way has been in Muncie for 40 years and for most of that time has worked quietly, behind the scenes, to bring peace to those who seek it. But these days, they are coming out from behind the shadows to reveal more about the agency while still protecting the privacy of those who need them most.

Ron Fauquher, A Better Way board member and Chief Executive Officer at Ontario Systems, spoke about the organization recently. “Right here in Muncie, we see more than 150 families come to A Better Way every year. Women and their children who have no place to go, no family close by, no family at all, or it isn’t safe to go there. That means we take in a new family every other day.

“Calls to our suicide help line frequently are triggered by hopelessness created by violence,” Fauquher said. “Last year, we received nearly 3,000 suicide calls – on average about eight a day – one every couple of hours – 24 hours a day, seven day a week.”

For Rhea Graham, she is free from the abuse of the past and now focuses on freeing others.

“I can’t imagine where I would be without A Better Way or United Way,” she said. “These are organizations that change lives. They changed mine.”

Juli Metzger, an associate lecturer at Ball State University, helped lead the Unmasked project two years ago. Students are preparing for a similar class in the spring of 2019 examining the growing recovery community in Muncie and Delaware County.