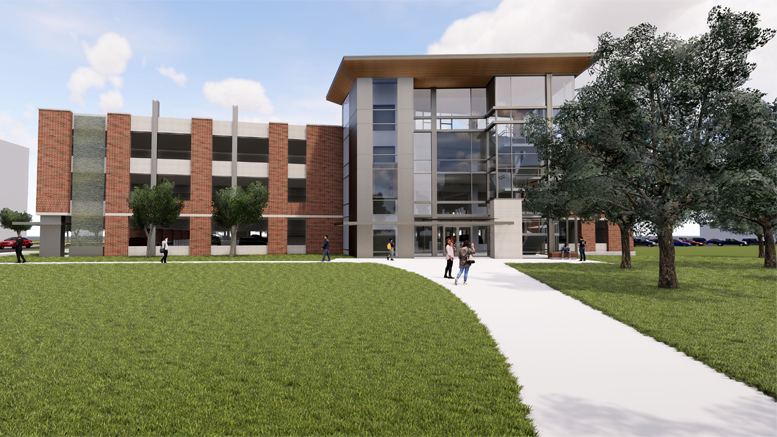 MUNCIE, Indiana – Ball State University’s Board of Trustees voted on March 30th to move forward with a new $18 million parking garage as part of a long-term plan to develop a new East Mall and make the campus friendlier to pedestrians and cyclists.

During the meeting, the Trustees approved the scope, budget and design of the New York Avenue Parking Structure.

Construction of the new garage, which will be adjacent to Studebaker Complex on the eastern edge of campus, is set to begin this summer. When completed in 2019, this structure will have 600 spaces, covered bicycle parking, and charging stations for electric cars. The Emens Parking Structure will then be demolished and replaced with a new Grand Lawn consistent with the Campus Master Plan.

President Geoffrey S. Mearns said the new parking garage is a key part of the Campus Master Plan, a long-term vision for the University’s physical spaces.

“The new East Mall will serve as a connector between the new East Quad and the Jo Ann Gora Student Recreation and Wellness Center, alleviate congestion on McKinley Avenue, and provide places for social gatherings,” he said. “At the same time, the new garage is a part of our long-range plans to remove parking and vehicle traffic from the central part of campus, enhance the campus’ beauty, and improve safety.”

The East Mall will extend from Ashland Avenue on the south to Neely Avenue on the north. The proposed project will also include site improvements to better connect the new parking structure to the core of campus. The Campus Master Plan also recommends that shuttle buses be rerouted from McKinley Avenue to New York Avenue. 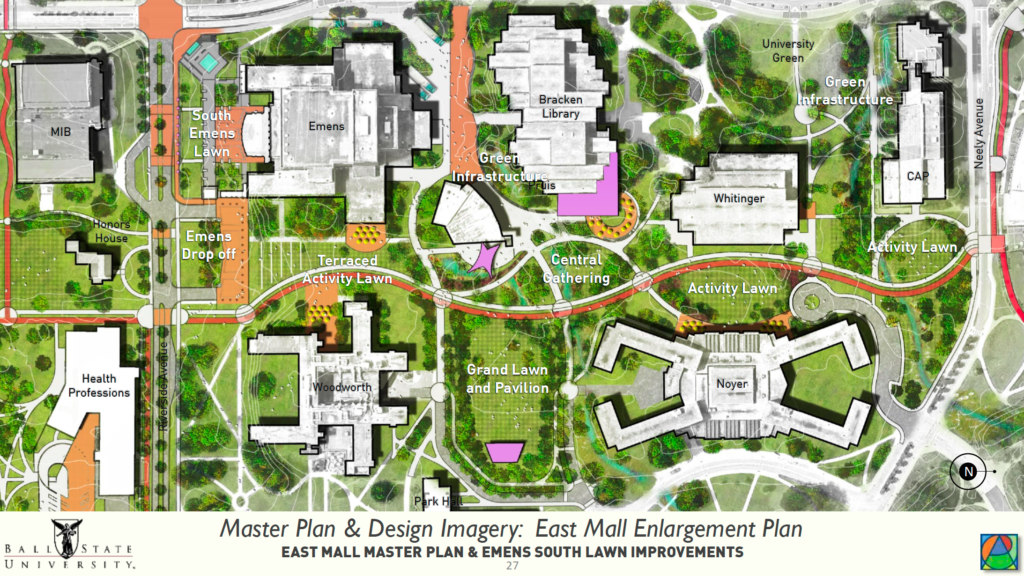 Building the new parking garage and then removing the old Emens structure to create the East Mall will continue the transformation of campus, said Rick Hall, chair of Ball State’s Board of Trustees.

“Ball State continues to invest in the campus improvements that will best meet the needs of future students, from the new College of Health Professions Building to the new North Residential Neighborhood to the new East Mall,” he said. “In addition to their primary functions, these developments will create a much more attractive and environmentally friendly campus.”

In other business, the Board approved the awarding of an honorary doctorate to entrepreneur and philanthropist Robert G. Hunt, a 1969 graduate of the University, at Commencement on May 5. He will give the main address at the ceremony, which begins at 10 a.m. on the Old Quad.

Mr. Hunt is chairman emeritus of Hunt Construction Group, now known as AECOM Hunt, working for the company that was established by his grandfather. AECOM Hunt, which regularly hires Ball State graduates, is recognized as one of the country’s largest builders of sports facilities and convention centers.

Over the course of his successful career, he has returned to Ball State to serve as an executive-in-residence and to mentor two immersive learning projects that involved Hunt Construction Group.

Founded in 1918 and located in Muncie, Ball State is one of Indiana’s signature universities and an economic driver for the state. The University’s 2017-18 enrollment — 22,513 — is the largest in school history and its freshman class of 4,002 is just three students shy of a school record. Every Indiana county is represented among Ball State’s student body, as are all 50 states and 68 countries. Ball State’s 731-acre campus is large enough to accommodate premier facilities and 19 NCAA Division I sports, but small enough to ensure the friendliness, personal attention and access that are the hallmarks of the University, where 90 percent of classes are taught by faculty. Ball State had its smallest tuition increases in 41 years for fiscal years 2018 and 2019.