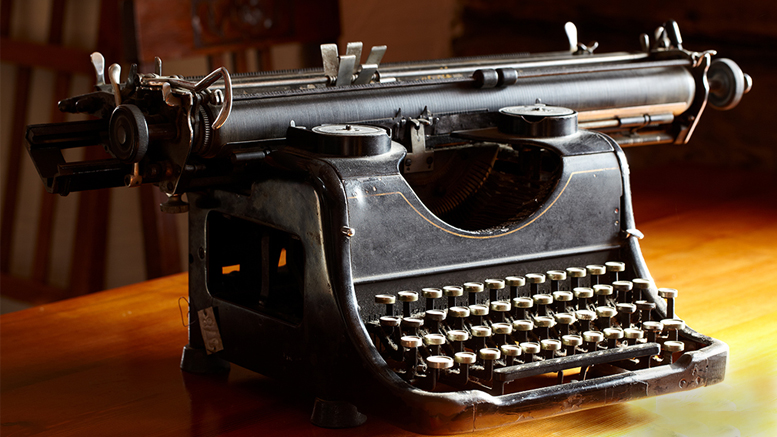 Remember these? They were called “typewriters.” Photo by: graphicstock

The other day on Facebook, I saw a meme or whatever you call it that asked how many people remembered high school typing classes?

I sure as heck do. Once, I even took such a class.

This was due to the fact that, because of the many school activities in which I was involved, I had neglected to register in a timely fashion for the advanced physics and calculus classes my guidance counselor urged me to take. If you believe that, for this week only, I am selling the Tillotson Avenue Bridge for a specially discounted price of only $10,000.

No, longtime readers of this column with excellent memories may recall my only high school activity was working as a student janitor. As for taking any classes outside what was thought of as the “general studies for half-assed pupils” curriculum, I didn’t. Sometimes I would wake up screaming from nightmares about being enrolled in one.

Ahhh, but typing class! That offered the possibility of earning a legitimate C!

As far as I remember, I was the only guy there when I walked into the classroom and spotted my teacher, an attractive young blonde whose dress, ironically, was pitted out with sweat stains.

One could only surmise she had hoped to score major brownie points as an amazing typing teacher, then stressed out when she saw her high school’s poster boy for slow-learners walk through the door.

Besides, the odds were stacked against me from the start. There I was, sitting at a typewriter that looked like it had a couple hundred keys stuck to it, and the first thing out of her mouth was, “Don’t look at them!” How stupid was that? Wasn’t that why we had eyes?

Then she brought up “touch typing.” By this point, my C was already slipping down to a D, with the very real possibility it was gonna head farther south to visit my old friend Mister F. Even by the end of the school year, no matter how many touch-typing exercises she forced upon me, whenever I touch-typed a sentence like, “Judy, let’s go get some root beer!” it would come out something like, “Jgda, lug’s ro gip smot woop veen!”

Meanwhile, all on their own, my eyes started working like a chameleon’s, each one having a full range of independent motion.  My left eye would concentrate on the workbook bearing the words I was supposed to type. My right eye, however, constantly snuck surreptitious glances at the keyboard, which had become the ever-increasing object of my loathing.

By the end of the year, my teacher hadn’t stopped pitting out her dresses. She had, however, stopped trying to teach me touch typing after I tested out at four words a minute, three of them misspelled. What the heck, I thought, I didn’t want to be some secretary anyway. But seven years later, against my better judgement, I stumbled into the newspaper business and was issued a typewriter older than my grandpa.

You know how the best way to learn a foreign language is to be dumped in a country and left to live or die by your own devices? Same thing with typing, it turned out. Within a month of writing for my sole source of beer-and-burger money, I was cranking out copy like an Associated Press teletype machine. Within six months, admittedly while staring raptly at the keys, I could type mountains of perfect copy.

Between stories I would watch the old newspapermen I worked with, and not many of them were touch typists, either.

Several stared fixated at their keyboards eight hours a day, and not just the guys with cataracts. One unique old fellow never lifted his nose more than four inches above his keyboard. Then he’d bring his pointer fingers up to ear level before slamming them down on the keys like a little Dutch boy trying to plug a leak in a dike. This was the same employee later spotted walking down a city street, carrying a dead possum by its tail.

Another great guy to watch was The Evening Press’s sports editor, Warren Collier. He had learned to type in the Army during World War II, on a typewriter from which the carriage return had been shot off. After typing a line, he’d grab the little wheel at the end of the carriage, roll it up twice, slide it back, then type the next line and so on until his story was finished. Thirty years later he was doing the same thing after every line, even though his newspaper typewriter’s carriage return worked just fine.

Guess it was a hard habit to break.

This all worked perfectly well, though. We had some hellacious writers back then, my favorite being  Dick Stodghill, who seemed to type perfectly normally.

But it was too good to last. One day we walked in and were greeted by the sickly greenish glow of computer screens, launching us into the brave new world of word processing. Just like that, the maintenance crew carried out the stacks of pulp paper we had been writing on, plus the canisters of glue we pasted those sheets together with.

This wasn’t all bad, we soon figured out, since  you could make any number of mistakes and correct them on a word processor with the flick of a finger.

But once afforded this modern convenience, I soon reverted to typing sloppily. In no time, I couldn’t type a lousy paragraph without making ten typos, a bad habit that haunts me to this day. Which,  come to think of it, wouldn’t surprise my old typing teacher one bit.