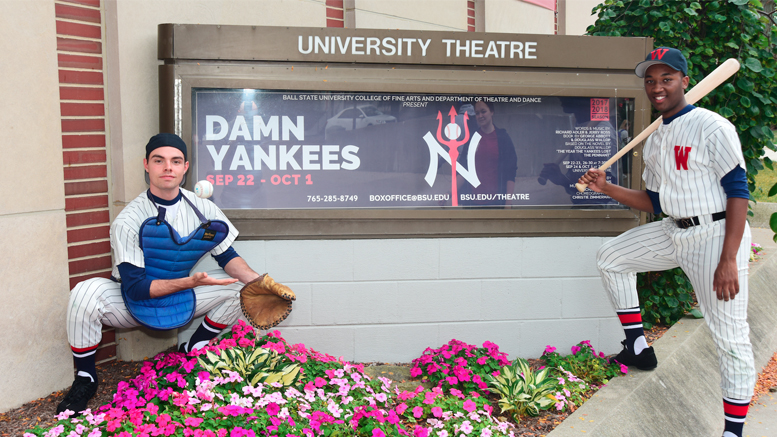 “Damn Yankees” tells the fictional story of baseball fanatic Joe Boyd as he roots for the Washington Senators to beat the New York Yankees. After trading his soul to the Devil to play for his favorite team, Boyd realizes the value of the life he’s left behind all so he can pursue his baseball dreams.

The production’s musical director is Michael Rafter, an Emmy-winning arranger and Broadway musical director who is a frequent collaborator with Tony-winning actress Sutton Foster. Rafter’s influence and expertise have “raised the cast’s bar,” said department chair Bill Jenkins, who is directing the musical.

“We’ve got a lot of great experience coming in to help make this show happen, and Michael is certainly the biggest influence as it relates to outside experience,” Jenkins said. “The opportunity to have him work on one of our productions has been a treat for all of us.”

Along with Rafter, the cast and crew is benefitting from working with other East Coast-based professionals including a guest sound designer, guest costume designer, and guest scenic designer. Christie Zimmerman, associate professor of dance, is lead choreographer.

A huge Cubs fan, Jenkins said he wanted to celebrate the Chicago Cubs’ 2016 World Series win by adding “Damn Yankees” to the department’s 2017 University Mainstage Series line-up. “It’s a musical about teams that defy the odds,” he said, “but it’s a great story for anybody. It has memorable music, wonderful characters, and it’s the kind of show where everybody is going to leave the theater smiling and humming tunes.”

Tickets for “Damn Yankees” are available for purchase at the University Theatre Box Office, open from noon to 5 p.m. Monday through Friday or online. The cost is $18 for the general public, $15 for students, faculty, staff and senior citizens and $10 for children 12 and under. Contact the box office at 765-285-8747 or visit the Department of Theatre and Dance’s website for more information.