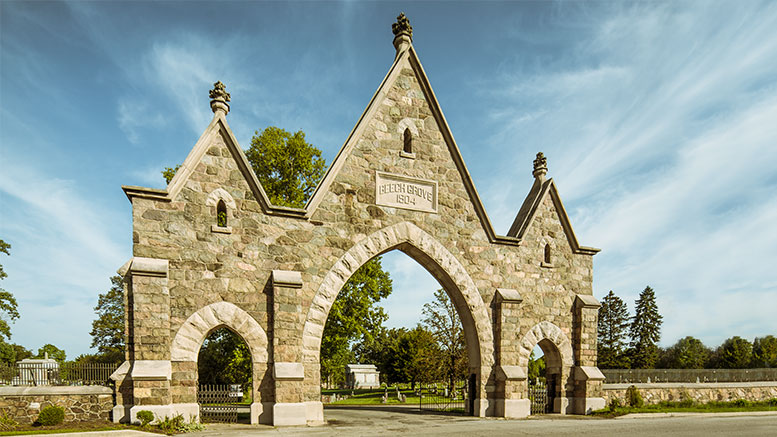 Muncie, IN — Beech Grove Cemetery debuts a new book this month, Beech Grove Cemetery Comes to Life. The book explores the history of Beech Grove Cemetery in Muncie, the evolution of lawn park cemeteries, a study of the landscape design, explanations of the funerary motifs and architecture, and comprises hundreds of short biographies of some of the 45,000 individuals laid to rest within the cemetery’s gates.

The book is a collaborative effort from Beech Grove Cemetery, Ball State University, and the Delaware County Historical Society. Funded by a George and Frances Ball Foundation grant in 2015, the writing of the book coincided with the production of a mobile app from Ball State’s Digital Corps and an oral history project led by Ball State History professor Ron Morris.

In 1841, Munseytown established Beech Grove in a beech tree knoll at the western edge of town. Burials in two older cemeteries were exhumed and reinterred at the new cemetery. As the nineteenth century waned, a landscape movement spread across the United States that sought to beautify cemeteries. At Beech Grove, these efforts were led by the cemetery’s fifth superintendent O. W. Crabbs. Crabbs beautified the cemetery, adding lagoons, rolling hills, thousands of new plants, the massive stone arch, a chapel, an administration building, and other landscaped features.

Since the 1840s, tens of thousands of Munsonians have been laid to rest in Beech Grove. The cemetery literally holds the remains of Muncie and Delaware County history – the individuals that transformed the city from an agricultural community, to a regional capital of the industrial revolution, and finally to our post-industrial city today. Veterans from every American conflict from the Revolution to the War on Terror, dozens of Muncie mayors, the five Ball brothers, former slaves, factory workers, artists, teachers, students, children, and thousands of others are interred at Beech Grove.

The book is available for $30 at Beech Grove Cemetery’s administration building and the Delaware County Historical Society.