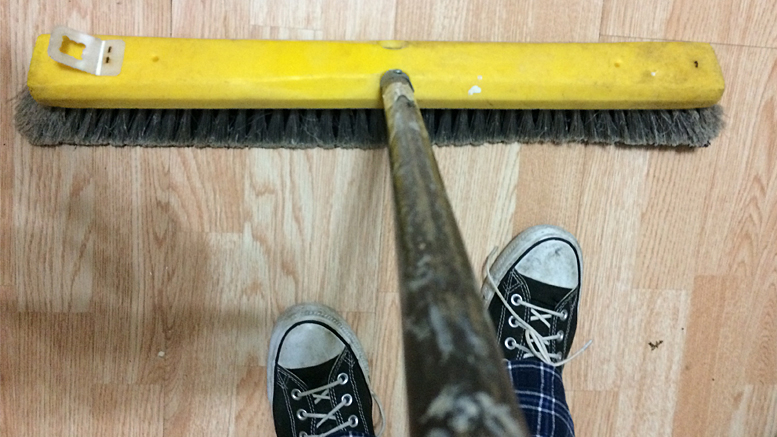 Matched set: a broom and a floor. Photo by: Nancy Carlson

A couple times recently I’ve seen a meme on Facebook, the crux of which is that a person of integrity will treat a janitor the same way he or she treats a successful company’s CEO.

As a former janitor, I completely agree.

My year piloting a broom for pay came in 1966, when I needed money for flying around the sky in rented airplanes, an expensive addiction I had just acquired. Receiving word that my high school occasionally employed pupils as “student-janitors” to help clean up at day’s end, I applied and was hired.

There were only three of us student-janitors in a school of 2,800 pupils. To land these coveted entry-level positions we underwent a stringent qualifying process, meaning we each had detectable pulses and none of us was flunking out of school yet. But once on the payroll, the first thing we learned was how our new jobs suddenly heightened our status among our peers.

Take it from me, there was no shortage of truly outstanding dorks among my classmates, and I was definitely one of the dorkiest. But once the afternoon dismissal bell rang, while stashing one’s books and grabbing one’s mop, our already lowly status took a precipitous turn for the worse. This confused me, frankly, the work seeming perfectly acceptable, certainly not a cause for derision.

In return for putting up with this, we earned the lofty sum of 95 cents an hour. That and, as we used to joke among ourselves, all the chewing gum we could scrape from the bottom of desks and chairs.

Walking around school with cleaning implements as the halls began to empty each afternoon we were, at best, met with blind indifference. That was from our friends, the nice kids. But what about the dip-wads and dimwits, of which – like us dorks – there was no shortage in a school that large? Were they scornful? Were they jerks? Did they look down their noses at us?

Let’s just say over the coming school year, I often fantasized about sticking my mop up places where I’d have needed surgical gloves to safely wring it out.

So that was sad.

On the other hand, it’s also possible we student-janitors unwittingly lived up to others’ opinions of us.

I’ll be the first to admit, when it came time for after-school activities, I never had to schedule my janitorial duties around meetings of the National Honor Society. My school spirit may have been lacking a little, too, those hallowed “halls of knowledge” having suddenly become “halls that needed sweeping.” Letter jackets might have fostered some esprit de corps.  But they were just a high school fantasy, one in which I envisioned myself nattily attired with my name embroidered in script, along with my graduating class and a sewn-on image of, perhaps, a dustpan.

Forget it. To attract the fairer sex, a student-janitor would have had to look like a teenage George Clooney, albeit with pimples. One conversation nobody ever heard in the halls between two hot cheerleaders was:

“Ooh, Johnny’s such a dreamboat!”

“Yes, and he’s a student-janitor!”

Beats me about the other two guys, but by the school year’s end I was anxious to give up being a student-janitor for the romance and excitement of flipping hamburgers at my local McDonald’s.

Still, today I look back on that school year as a privileged one. That’s because after suffering a stroke and having the machine shop where he’d labored all his adult life sold out from under him, my Grandpa Smith ended his working years as a janitor at my high school.

With the opportunity to work alongside him, I learned something about determination, pride and, alas, gutsiness. Turning corners to catch Gramps unsteadily climbing tall ladders to change light bulbs while swaying 15 feet in the air invariably left me totally chilled.

But it also taught me about the inherent nobility in any work that’s dutifully done, cleaning high schools included.