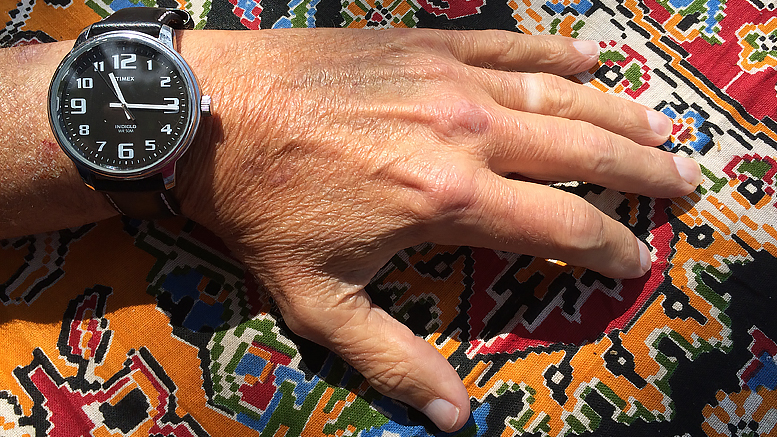 See his wedding ring? Yeah, he didn’t either. Photo by: Nancy Carlson

Having started a diet a month ago, what I ended up with is skinny fingers.

I can’t say skinny fingers is what I was shooting for, though I suppose one reaches a point in any diet where one figures skinny fingers are better than skinny nothing.

But then, thanks to my skinny fingers, I lost my wedding ring.

Beats me exactly where or when it slipped off. For some reason I began staring at my left hand the other day, sensed a vague notion that something was amiss, then realized, “Crap! My wedding ring is gone!” Adding to my consternation was the fact that, though it was missing, I could still feel it.

This was proof, I suppose, that this ring is firmly ingrained in my psyche. After all, I have worn it every day for more than 35 years of marriage. Well, except for three days five years ago during an earlier diet, when I also lost it due to skinny fingers, which I am beginning to view as a personal dieting handicap. That time my ring turned up in a pants pocket with a nickel wedged inside it.

At any rate, you know how they say people who lose limbs still feel them? “Phantom” limbs, they’re called. Guess mine’s a phantom wedding ring, because I sure as heck felt it on my hand.

Anyway, there I was with my wedding ring suddenly gone and getting nervous about telling my wife of its absence. You know how women get, especially when they are married to cool, macho, sexy dudes like me. She’d undoubtedly figure I’d been out chasing bimbos or floozies in honky-tonks, so I just flat-out confronted her.

“I haven’t been chasing bimbos in honky-tonks!” I insisted. “Let alone floozies!”

But Nan only looked at me like I was crazy.  “Of course you haven’t, dear,” she said, like it was inconceivable any self-respecting honky-tonk bimbo or floozie would tolerate some skinny-fingered oaf like me clumping around the dance floor after her, sweating and gasping and rolling over her bunions with his walker.

It felt good to have Nan’s full confidence, sort of.

Still, my wedding ring was gone, and I was having no luck finding it. I checked the bed. I checked under the couch cushions. I checked our bag of midget Milky Way bars six or seven times, always taking the opportunity to grab another one for a freshness test. No luck. Finally, at day’s end, for the briefest of moments and almost in spite of myself, I closed my eyes in frustration and prayed, “Lord, can I get a little help here?”

From the start, however, I considered this a long shot, being a very wishy-washy believer, especially  for a graduate of a highly regarded Christian liberal arts college. Besides, while I’d like to think God may have a say in things like the outcomes of wars and natural disasters, I didn’t think He cared about minor stuff like like point spreads and Super Bowls.

The point is, I was pretty sure God didn’t care if I found my wedding ring or not. It was with that depressing thought in mind that I finally headed off to bed. Bright and bushy-tailed at the crack of 10 a.m. the following morning, I was at my desk doing some editing when I grabbed my cane to navigate a quick trip to the bathroom and … plink!

There on the floor at my feet lay my wedding ring, it having just dropped from my cane’s  rubbery four-point tip.

I’ve got to tell you, in the parlance of my generation, this freaked me out. Examining that tip, I could see how my ring may have become wedged in it. But over the course of several previous days I had used this cane numerous times, including on a couple trips to Indy where, had it plopped out, it would have been lost forever.

Of course, I’m far too shallow a person for this event to have a profound effect on my personal religious beliefs, which remain shaky. However, lately I find myself thinking, hmmm, I never thought it would, but my wedding ring actually turned up.

Therefore, I can’t help but wonder if a quick prayer would work on that new muscle car I’ve been wanting? And could I, in good conscience, petition God for, say, seven days on a beach in the British Virgin Islands? Or how about just a couple of great steaks, gin and tonics and shrimp cocktails down at St. Elmo’s?

Actually, I kind of hope not. It’d seem pretty crass.

Tell you what, though, in the future I should probably refrain from telling God what isn’t, and is, His business.