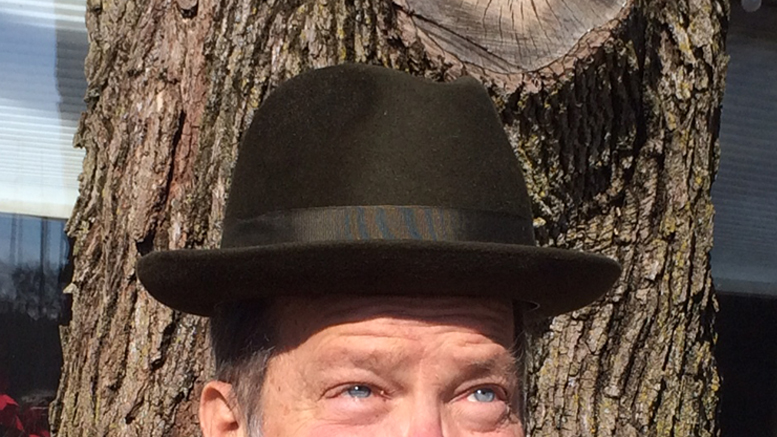 One is a classic fedora, the type that as a little boy I called a “daddy hat.” That’s because back in the day, it was the kind my father wore to funerals, dental appointments and similar somber gatherings.

The other is a snazzier golf-style hat, or cap, that rides atop one’s head like a black-leather cheese wedge. It’s the sort of hat Dad would wear to our favorite burger joint, Baptist root-beer bashes or taking me to Saturday night super-modified races at the county speedway.

Lately I have worn both on a trial basis, trying to overcome my irrational belief that I look dorky wearing hats.

“Don’t judge yourself too harshly,” he said, sympathetically.

“You do look dorky wearing hats.”

That cleared that up, I guess, much to my chagrin. See, I really wanted to start wearing a fedora in homage to my latest television hero, Raymond Reddington, from NBC’s “The Blacklist.” The antithesis of dorky, he plays by his own rules. He never loses his cool. He’s always chipper and witty, even when being tortured.

And he always wears a fedora.

Still, all that’s just Hollywood window-dressing. Was I so shallow, I asked myself, to seriously believe something as simple as wearing a hat could suddenly turn me into Mr. Cool after years looking like Mr. Dork-Puss?

Sure I was that shallow! It’d happened before.

Years ago, for example, Robert Redford starred in the spy-thriller “Three Days of the Condor.” In one scene he was warily scanning the streets of New York City for assassins, all the while eating a big soft pretzel. Two minutes after the show ended, I was in line at the mall’s pretzel shop. Chewing my pretzel, I then stood around warily, just as Redford had, trying to look like I was worried about being assassinated, instead of about making it home in time for “Little House on the Prairie.”

And that’s not the only example.

You know that first scene in “Dirty Harry,” where Clint Eastwood interrupts eating his hot dog to stop a bank robbery? Right after that movie I hightailed it down to the Orange Julius stand. Turned out half us losers from the matinee were there, munching hot dogs, squinting suspiciously at each other and acting like were packing .44 Magnums in our pants.

As for the headwear precedent?

What the heck was Richard Dreyfus thinking in “Jaws,” wearing a wool stocking cap in the middle of summer on balmy Amity Island? Beats me, but after watching him, I spent a miserable June, July and August wearing a stocking cap in Muncie, trying to look as cool as Dreyfus while battling terminal heat rash on my forehead.

Regrettably, none of those examples caused my personal Dork-o-Meter to even slightly swing toward less-dorky status for longer than, say, a minute and a half. Nevertheless, they did provide a badly needed dose of reality.

After taking a close look at Dad’s fedora, I finally realized it would never lend me the Reddington-like flair I so desperately sought. It was a size seven-and-a-half, after all, and I am a seven-and-five-eighths. What difference did that extra eighth-inch make?

It meant if I wore it, Dad’s fedora would forever seem to hover above my head rather than comfortably embrace it.

On the other hand, I’m glad to report Dad’s black leather “cheese wedge” hat fits me like a proverbial glove. Also, being a snazzier piece of apparel, it more closely matches my flashy image as a bon vivant hipster with joie d’vivre practically gushing out my wazoo, a guy who’s secure enough in his appearance to make his own confident way through town.

That’s why I’ve been wearing it a lot lately.

In the house, I mean.