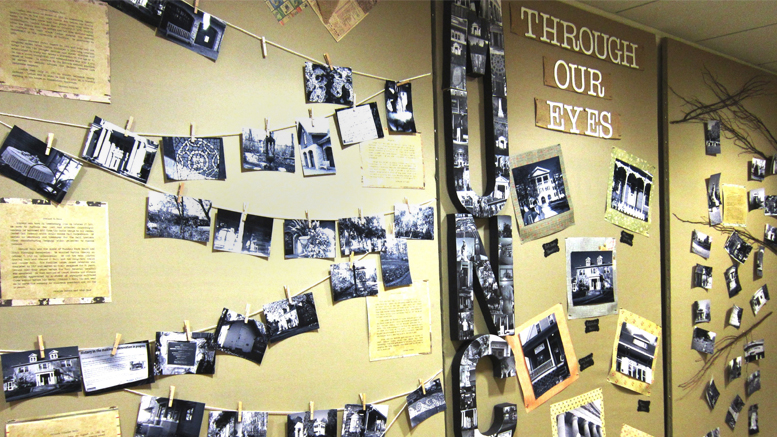 Last fall 16 third graders took a fieldtrip through Muncie and through history. They then turned their experience into a project that is now on display at Maring-Hunt Library.

The students first began working on the project in November of 2015, when their East Washington Academy teacher Dana Hartzell assigned it to them. “It was a project I had thought about doing for years,” said Hartzell.

The project documents Muncie landmarks through original photos and reports. “My goal was to get the perspective of a child…I wanted to see what they see,” said Hartzell. And that’s just what happened. The project includes information about historical people and places, such as Cyrus Dallin who created the Appeal to the Great Spirit statue; the Muncie Central Fieldhouse, one of the world’s biggest high school gymnasiums; the Carnegie Library, which was funded by industrialist Andrew Carnegie; and Ball State University, originally called Eastern Indiana Normal School, which began as a private school in 1899.

Robert Warrner, a Muncie Community School board member and retired social studies teacher, acted as the tour guide for this unique project. Because Warrner is very involved with the Muncie community, he set up the entire tour. After exploring Muncie with the students, he and his wife, Janet, prepared a home cooked meal for the group.

The children worked on the project throughout the year. In mid-May, the project was completely finished, just in time for Muncie Community School’s Night of Excellence event, where it was first showcased. “I’m really proud of the project…I feel like it’s a piece of Muncie now,” said Hartzell. But she wants people to know that this project does not belong to her, “It’s not my project, it is the students’ project!”