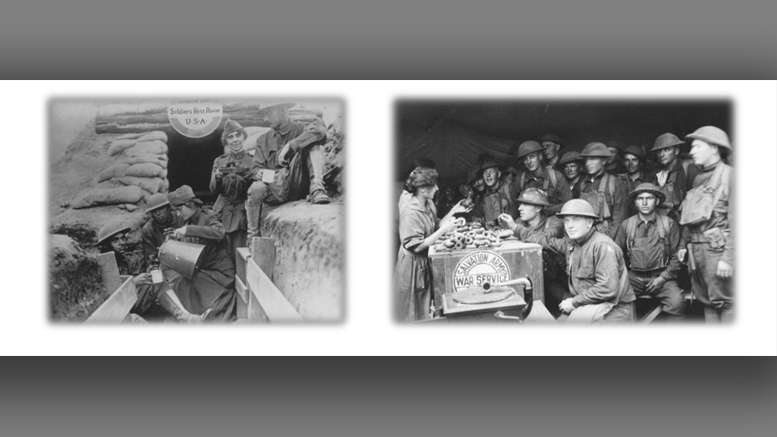 By: Jonathan Taube, Cadet in Charge— 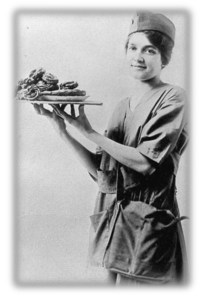 National Donut Day is a yearly tradition which celebrates The Salvation Army’s “Donut Lassies”, approximately 250 women who voluntarily served during WWI. In doing whatever they could to bring comfort to the soldiers rotating off the front lines, these young women provided writing supplies and stamps, mended clothes, and served home cooked meals and hot coffee—free of charge.

With limited resources at hand, two of the young Salvos—Ensign Margaret Sheldon and Adjutant Helen Purviance—managed to whip up some dough. Cooking in an overturned steel helmet, they began frying donuts seven at a time. The donuts were an immediate hit with the troops and the “Donut Lassies” began cooking them up in bulk. Their creative compassion helped to firmly decide the donut’s place as one of America’s favorite treats.

Since 1938, The Salvation Army has commemorated National Donut Day in honor of these Donut Lassies. Their example continues to be seen today as The Salvation Army serves the needy in communities all across the globe. In Muncie, funds raised locally enable The Salvation Army to help thousands of people throughout the year. Find out more at samuncie.org.

National Donut Day was first celebrated in Chicago in 1938 to help the needy during the Great Depression and commemorate the work of the “donut lassies” who served soldiers during World War I. Today, the first Friday in June each year marks an important date in American food history and raises awareness for the critical services that The Salvation Ar- my provides to those in need each day.

In order to raise needed funds during the Great Depression The Salvation Army began honoring 250 World War I volunteers and lassies, on the first “National Donut Day” in 1938. Among those honored were Ensign Margaret Sheldon and Adjutant Helen Purviance who came up with the idea of frying donuts in soldiers’ helmets near the front lines as a quick treat. The donuts became an instant hit that was brought back to America by returning “doughboys.”

About The Salvation Army

The Salvation Army, an evangelical part of the universal Christian church established in London in 1865, has been supporting those in need in His name without discrimination for 130 years in the United States. Nearly 30 million Americans receive assistance from The Salvation Army each year through the broadest array of social services that range from providing food for the hungry, relief for disaster victims, assistance for the disabled, outreach to the elderly and ill, clothing and shelter to the homeless and opportunities for underprivileged children. 82 cents of every dollar The Salvation Army spends is used to support those services in 5,000 communities nationwide. For more information, go to www.salvationarmyusa.org.