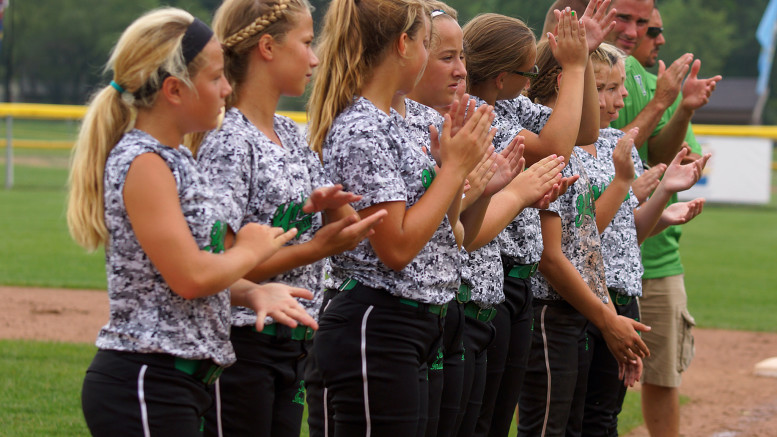 Yorktown’s Majors Softball Tournament Team looks on prior to their championship game against Iowa.

At stake? A trip to the Little League® Softball World Series.

Win or go home. The #1 and #2 seeds squaring off in the championship game. Two undefeated tourney teams who had breezed through their first five tournament games. A core group of local kids – coached by their dads – who’ve played together with this goal in mind since they were six. A starting pitcher who breaks her hand mid-game, yet tries to continue. Did I say movie script?

Under a brilliantly blue sky on a day whose temperature and humidity were unusually pleasant, Yorktown went toe-to-toe with an outstanding Iowa team, one I predict will win the Little League Softball World Series.

Yorktown came out strongly, putting up a run in the first inning. Nice to put some pressure on a team that has led the entire tournament. The score stood at 1-0 through three complete innings, until Iowa found a way to manufacture two runs in the top of the fourth. With the bases loaded, Iowa purposely sent a decoy runner from first to second – a supposedly botched play on their part that could have won an Oscar, creating considerable confusion amongst the Yorktown infield. Iowa’s base runner on third seized the moment and safely went home. Iowa added a second run when they scored on a wild pitch by Savannah Baker.

There’s more to this story about Ms. Baker, though. As throughout the entire tournament, Savannah was dominant on the mound on this day. She started the game throwing three scoreless innings that included four strikeouts, two of which closed an inning where Iowa threatened. On a close play in the fourth at the plate, she tagged an Iowa runner, only to grimace in pain. After a failed attempt to throw to the next batter, she left the game for good. X-Ray’s confirmed a broken bone in Savannah’s left hand.

Across the state and regional tournaments, Savannah’s totals are impressive. She threw 29.0 innings, striking out 41 hitters and giving up only eight earned runs.

With Iowa clinging to their one run lead headed into the bottom of the fourth, Yorktown tried desperately to get runners on base and create opportunities. Where there had always been an answer, this time the Tigers found none. Did I mention Iowa is an excellent team?

Yorktown’s last spark came from a familiar place, Lexie Robertson. She replaced Savannah on the mound and threw two and two thirds scoreless innings for the Tigers. She also started off the top of the sixth with a rope to left field for a single. This gave Lexie, the rest of the team, and the 600+ fans in attendance renewed energy – and a belief that we knew how this movie was going to end.

Lexie advanced to third on a pair of fielders choices. Unfortunately, she was stranded on third base when Yorktown’s final batter struck out.

Across the state and regional tournaments, Lexie was 26 for 53 (.491) with four doubles, three triples, and twenty two rbi’s.

Yorktown found strong performances and magical moments throughout their 16 game run through state and regional. Ainsley Phillips hit .472 and led the team in rbi’s with 27. Delaney Boyd led the team in hitting at .532 and runs scored with 32. Finally, Reagan Cox hit .444 with three doubles and three triples during the run. Hannah Avila hit .412 and struck out only once in 16 games.

For Yorktown, this loss represents the end of a journey started years ago – a journey that isn’t only the result of God-given talent, but hard work, late nights at the cages, and thousands of rep’s in the field. And let’s not forget that “special something” this group had.

In the end, they are just kids, playing their hearts out, crying on each other’s shoulders, and trying to figure out how to move on after a perceived failure.

But these same kids simultaneously share their contagious goofiness with each other. They dance between innings. They pick each other up when one of their own falls. They choose courage when even us adults may bail. They represent themselves, their families, and their community with class.

Win or lose today, this journey was an excellent life experience for everyone involved. You know, the more I think about it, our script delivered a happy ending after all.