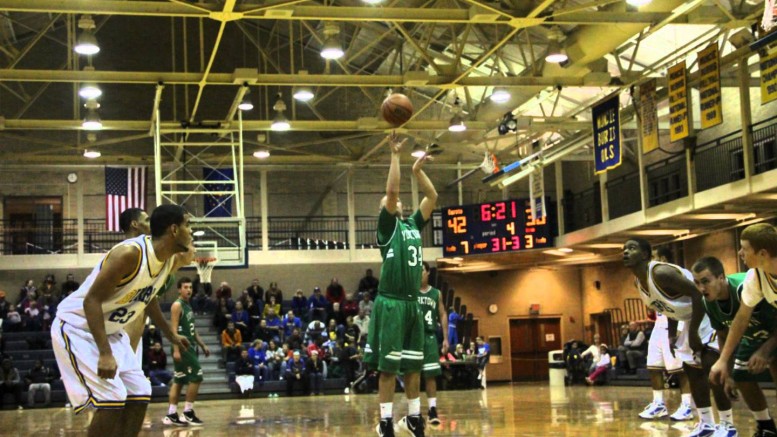 All three of these important words embodied the way Yorktown played in their Sectional Final loss to Hamilton Heights 55-52 in double overtime. The latter of those three words was the message wanted to send to its opposition. They relayed that message well. That wasn’t the reason for their defeat. If anything, no one wanted it more than this group. Quite frankly there was no reason for their defeat. A couple plays here and there, yes you could argue that. This group could not have played any harder and as one team on the floor. Sometimes in sports you have a couple individuals carry the way. For Yorktown, their entire starting five was the engine the last two years. They left everything out on the court.

Each time Hamilton Heights thought they had buried the Tigers, Yorktown had an answer. Heights led by 9 at points in the 3rd quarter. They led by 5 going into the 4th quarter. Yorktown didn’t go away quietly. Caleb Morey hit 1 of his 2 threes with 3 minutes left in the 4th quarter. At that moment, you thought just maybe Yorktown would find a way. Then maybe the most heart wrenching moment was the ball in Purdue basketball commit Grant Weatherford’s hands with 10 seconds to play. He passed up a shot for his brother who then met the right hand of Riley Neal in defense. Neal extended the game defensively when all night his offense was what kept Yorktown hanging around. We headed to a first overtime.

The first overtime started with Hamilton Heights jumping out to a 4-point cushion. However the momentum changed in about 30 seconds. A blocked shot by Riley Neal led to a Yorktown rebound. Caleb Morey pushed the ball up court, passed left for Riley Miller who spotted up in the left hand corner and connected on a three ball. It was only a 1 point game. Hunter Crist for Hamilton Heights was then fouled for Hamilton Heights with about 20 seconds to play. He hit both. It was still a one possession game. You might have thought in this situation Morey, Miller, Moore would all be viable options to take the 3 point shot. Nope. Jacob Preston got a look from the top of the key, took it, and made it. A missed attempt by Hamilton Heights ended the first overtime. There was another overtime to be had.

It started just as the first overtime did. Hamilton Heights jumped to a 4 point lead again. Then even stretched it to a 6 point lead. Yorktown was finally sunk right? No. A couple easy buckets traded for missed free throws made it just a 4 point game with under a minute to play. Riley Miller had just gotten a rebound and trotted down the floor. Yorktown worked an offensive set then wasted a little clock. It came back to Riley on the perimeter. He launched a three and drilled it. It was only a one point game again with about 25 seconds to play. Hamilton Heights hit a free throw then missed one. Yorktown had the ball and couldn’t convert. They fouled Hamilton Heights who hit 1 of 2 free throws again. The second of which was missed, came to Riley Miller who then missed a long heave with time expiring.   A heartbreaking loss but Yorktown could not have possibly played any harder.

For Yorktown this is not just about losing 8 out of 10 basketball players. You lose 8 student athletes who combined for 56 varsity letters at Yorktown. You will not be able to replenish next year or maybe even the year after. However, this group will forever be the top mark to reach as a school. It’s incredible all that they’ve accomplished. Many of them will go on to play collegiately but some won’t. One thing is for sure. They will always be in the history books of Yorktown High School Athletics.