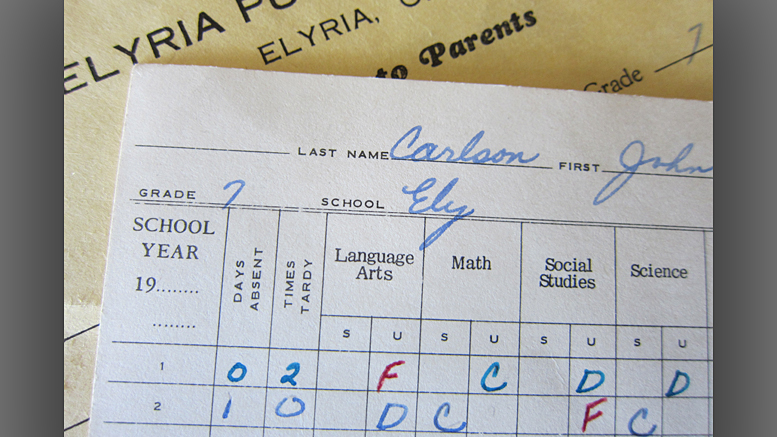 Some people think the lawlessness rampant among American youth is a product of our crazy times, but it’s not.

Frankly, I don’t even know if “riding double” remains in our lexicon of criminal acts, but it sure was in my hometown when I was a boy. If two kids got caught riding on a single-seat bike, they’d be hauled off to the dreaded Bicycle Court.

Well, OK, you wouldn’t be “hauled off,” exactly. You’d be cited for riding double and – assuming you hadn’t been busted for, say, igniting dog poop on your neighbor’s front stoop on Halloween – released on your own recognizance. Nevertheless, your date with Bicycle Court wasn’t far off.

It was late in the afternoon on a hot summer day when my buddy Paul and I blindly rounded the corner of Poplar Street onto Pasadena Avenue, straight into the arms of The Heat, The Man, The Fuzz.

Soon we were in the back of a black-and-white, listening to a fiery sermon about bicycle sin. When my Mom’s friend Mavis drove past, I tried to duck, but not in time. It wasn’t three minutes later that Mom’s car backed out of our driveway and slowly approached. As she drove past, our eyes locked.

Now, my Mom was normally the sweetest woman in the world, but spotting me ensconced in the back of a police cruiser, something inside her snapped. Her eyes narrowed. Her lips quivered. I’m pretty sure smoke spouted from her ears.

Then, the thing I had feared most happened. Rounding the corner on his way home from work, my Dad slowed, stared into the cop car and, alas, spotted his first-born child. For half-a-second, a look of shock crossed his face. Then, to my amazement, he started laughing his head off.

It was a jittery kid who walked into our house a couple minutes later. Mom was halfway beside herself. It was a well-known fact, she hollered, that riding double was how most career felons got their start. And even though they wouldn’t show up on the national scene for another decade or so, I’m pretty sure she flashed on a vision of me marrying Squeaky Fromme and joining the Manson Family.

But speaking of families, perhaps worst for her was the fact that the fast-phoning Mavis had witnessed this ultimate humiliation of ours.

Dad? He could be a real no-nonsense father, with what usually seemed to me an extraordinarily limited sense of humor. But all he did was warn me not to do it again.

What’s more, shortly after that he surprised me again when I brought home my very first F on a report card, in Language Arts no less. Warned by Mom of the hell I’d pay when Dad got home, I nervously awaited his arrival, totally puckered. After all, he was a brilliant guy who had earned math and chemistry degrees on the GI Bill, and was working on a doctorate before Mr. Stork delivered his pink little future flunky.

Confronting this pimply wretch, he asked how I’d gotten the F. This being the height of the Cold War, I laid it on thick about how tough it was to study with the threat of a hydrogen bomb dropping through the roof at any time. After all, he’d only faced the Great Depression and World War II.

He had me there.

Well, don’t do it again, he warned me, as with riding double, and I never got another F on a report card; not in Language Arts, anyhow (Note: See photo of next grading period’s F in Social Studies).

By the way, when my date with Bicycle Court arrived, I got a chance to work on my writing skills while penning a thousand-word essay about the moral degeneracy that riding double unleashes on society.

As I recall, it wasn’t a great essay, but it wasn’t bad, either.