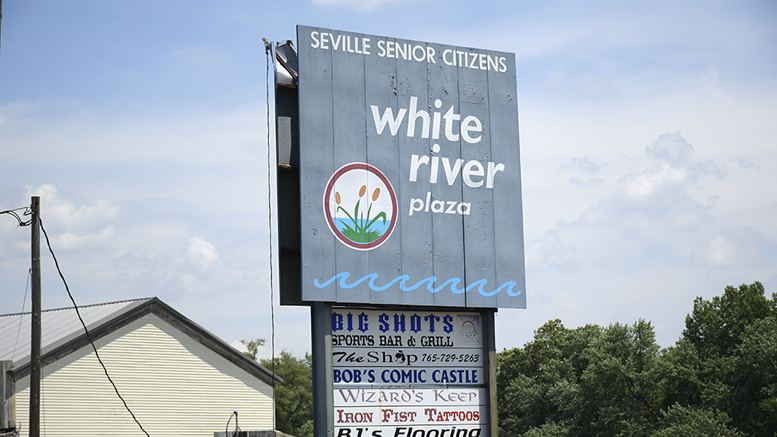 The sign at the south end of White River Plaza. Photo by Mike Rhodes

MUNCIE, IN—Local entrepreneur Scott Mick, owner of The Barking Cow, has finalized the purchase of White River Plaza, which contains approximately 85,000 square feet of retail space. The Plaza has been the home of board game stores, breweries, and food establishments, although it was previously owned by a tax-exempt nonprofit entity. Now that the Plaza is owned by a for-profit business entity (The Cedars of Muncie LLC), Westside neighbors will benefit from incoming retailers and a boost in property tax revenue.

Mayor Ridenour is enthusiastic about the space being managed by a local business owner with a reputation for success. The Plaza is close to Westside Park and the White River Greenway, although it is not easily accessible from the trail. Ridenour plans to invest in crosswalk improvements and an exit ramp (typically called a “spur”) from the Greenway to Nichols Avenue, so pedestrians can easily access businesses along White River Boulevard.

“People ask me all the time, ‘Where can I get lunch or a drink along the Greenway?’ A family living downtown should be able to walk the Greenway, stop for lunch and shopping at the Plaza, and then spend the afternoon at Westside park. That’s what it means to be a walkable city.”

Adding a crosswalk and a spur on Nichols Avenue has been a long term goal, and the city is ready to move forward now that the Plaza is owned by someone with fresh ideas. Infrastructure improvements will be paid for out of the Mayor’s EDIT funds, and the design process will begin immediately. On July 11th, City Council will consider a tax abatement to support renovations and improvements to the Plaza itself.

According to Mick, “We are excited about the opportunity to breathe new life into the White River Plaza.  Our goal is to bring new traffic to its current tenants as well as offer a home for new businesses and restaurants to serve as an appealing gateway to the downtown area.” The immediate plan for the Plaza is to improve the façade and parking lot to attract eateries. Residents on the Westside can expect to see improvements to both the Greenway and the Plaza in the upcoming months.