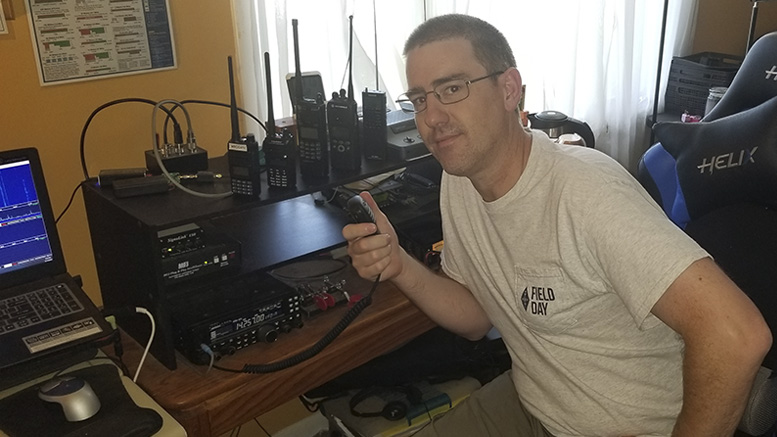 Drew Bennett, president of Muncie Area Amateur Radio Club as he attempts to make a contact from his Muncie station. Photo provided by Jim McDonald.

YORKTOWN, IN—Members of Delaware County’s amateur radio community will join forces on  June 25-26  at Morrow’s Meadow for a 24 hour test of communication abilities and emergency preparedness.  Called “Field Day”, amateurs will set up and operate portable radio stations and make contacts with like stations across North America. Hours of operations will be 2 p.m. Saturday through 2 p.m. Sunday.

“Since 1933, the amateur community has come together for the largest all-volunteer radio communications exercise in the world,” according to Gary Lee, trustee of the Yorktown amateur (or ham) radio club—known as EMCOMM ECI (Emergency Communications for East Central Indiana.) “The Muncie and Yorktown clubs have worked together on other projects and we are looking forward to testing our skills on this project,” Lee continued.

It is called Field Day, since stations will be operating in situations that might be encountered in emergencies—man-made or natural—where everyday systems of communications such as telephones or public service radios are rendered inoperative. While not a contest in the literal sense, stations such as this will attempt to make as many contacts as possible during the allotted time period.

Many times during natural disasters, amateur radio operators are the first to get news out to the world because their radios do not depend on infrastructure to communicate.

Drew Bennett, president of the Muncie Area Amateur Radio Club, says there are expected to be nearly 35,000 amateurs across the continent taking part in the weekend activities. “We encourage the public to stop and visit with us. We will have a transmitter set up just for the public to try their hand at talking around the world. We will have licensed operators available to work with those folks who are curious about how we make contacts on battery powered radios with a wire strung between two trees,” Bennett said.

Field Day is sponsored by the American Radio Relay League—a more than 100 year organization representing the approximately 725,000 licensed amateurs around the United States (and on the International Space Station.)