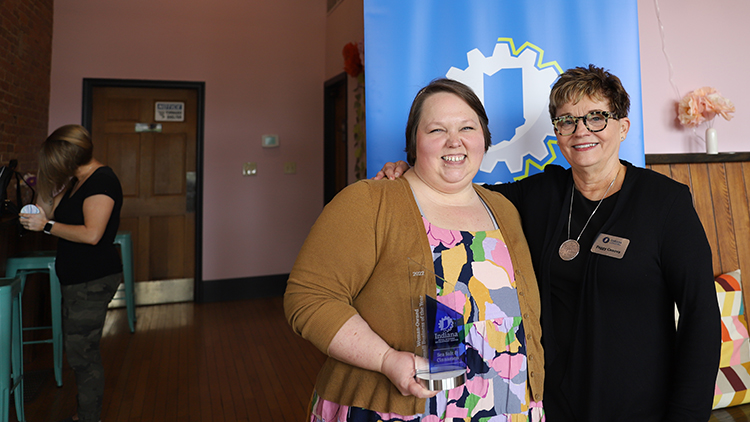 By Christy Ragle and Morgan Weaver—

“Studying music has taught me so many valuable skills that translate well to business,” she noted. “I always say, music is all math and baking is all math, but both have a creative component to them. Those skills helped me transition into this role more easily.”

Reninger also used her background in performance to deliver a memorable acceptance speech when the team from the IEDC presented her with her award. Her parents were in attendance, and she credits them for being a big part of the company’s success.

“We are really well-supported in the community, and we work hard to help people feel supported by us. Our employees are amazing, and we couldn’t do anything without them. Having the state recognize us after so many years of hard work, sweat, and tears, it means a lot and confirms that we’re doing something right,” Reninger shared.

The IEDC honored eight Hoosier small businesses that had worked with the Indiana Small business Development Center (SBDC). The goal for the awards is to honor the achievements and contributions of Indiana’s small businesses and entrepreneurs as they grow Indiana’s economy and strengthen communities.

Amanda started Sea Salt & Cinnamon in 2014 by making cupcakes for friends. With the guidance of East Central Indiana Small Business Development Center (SBDC) Regional Director Peggy Cenova, the business has grown their team and their food is offered all over the state of Indiana.

One of the key things that sets Sea Salt & Cinnamon apart is the fact that the food they create is fully vegan. Amanda’s husband, Kyle, was vegan before working in the business and created the company’s “savory” menu. Many of the food items can be made gluten-free upon request. Their mission is to “invite people into compassion for others, themselves, and the animals we share this planet with.”

“Peggy’s mentoring has been the biggest help for us,” Reninger explained. “She always has an ear to listen, excitement for each step forward we take, encouragement when we need it, and a genuine interest in what we are doing.”

Owning a business as a woman hasn’t always been easy. Even though Kyle is a huge part of the business, Amanda is the owner. There are still instances when people want to talk to Kyle because they assume he is the owner, even though he quickly corrects them. Amanda has learned to leverage Kyle’s influence when needed.

“When I get the idea that a deal may not go through if they only speak to me, or if someone asks me an ignorant question about my boss or something like that, he is always available. He uses his presence to help us reach our next goal. We are a team, but in the end, I started and own this business, and we constantly have to remind people of that,” she said.

Sea Salt & Cinnamon opened their first storefront location in the fall of 2021, with the help of a successful Kickstarter campaign. The company continues to grow their reach. They have been working with a distribution company and are ready to continue to expand distribution to some grocery stores. Amanda has her eye on a large building that would serve as a production kitchen as she considers national distribution.

“It’s really fun that part of my job is dreaming about big things,” she exclaimed. “I have big goals and even bigger dreams, and I’m excited for what the future holds!”