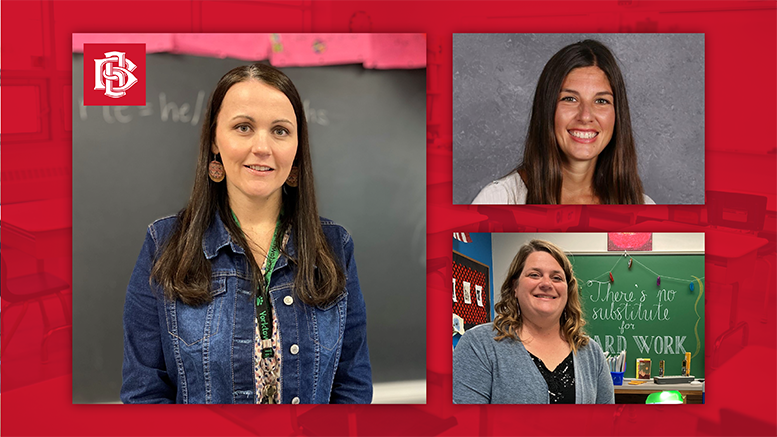 MUNCIE, Ind. — Ginger Thompson didn’t always teach this way. When the high school Spanish teacher began her career 17 years ago, she said she was “a traditional teacher.”

“I had a textbook and that’s what I used to teach my students. I used the methods that my Spanish teachers had used with me in high school and in college because that was the best methodology we had at that time,” she said.

But as Thompson began to attend conferences and engage in professional development, she tried out new methods like “flipping” her classroom (Thompson would pre-record lectures, have her students watch and take notes on the video lectures, then use classroom time to apply and practice the skills discussed in the video lecture). But in the fall of 2019, she discovered Comprehensible Input (CI), a teaching method that helped her stand out as the winner of this year’s Excellence in Teaching Award from Ball Brothers Foundation.

“I fell in love with this new approach to teaching language and began to read everything that I could get my hands on,” she said. Just before the pandemic hit, she even was able to shadow another teacher in Indianapolis who was using CI in their classroom.

CI is a way of teaching foreign languages by immersing students in the language at a level just above their current skills. In this method, students understand enough of what they are hearing or reading to understand, while still being introduced to new vocabulary or grammar structures to further grow their skills.

“If you’re speaking to them in Spanish and they don’t know what you’re saying, it’s just noise. Their brain has to acquire these words and make these connections,” Thompson said.

She explained it as similar to how a baby learns language: through gradual immersion and interaction.

“We teach very small chunks of vocab at a time, and we recycle and repeat those words in as many different ways as we can,” she said. “If you think about how a baby learns language, they are spoken to, they are read to, they are sung to in the language that they are trying to learn, and eventually they understand what you are saying to them and start to produce words and string sentences together themselves. That’s the natural process of language, and that is very much what CI strives to be.”

Thompson said that since implementing CI two years ago, she’s already noticed a big difference in her students’ learning—and the students have noticed too.

“It’s just a really cool approach and it’s so eye-opening. I’m seeing great success,” she said. “I wish I would’ve known about CI right when it came out because the students are loving it. They’re all in.”

As the winner of the Excellence in Teaching Award, which annually recognizes a Delaware County teacher who uses unique approaches and creates authentic learning experiences to motivate their students, Thompson will receive grant funding of $5,000 each for her classroom, school and district, as well as an additional $2,500 for professional development.

With the professional development funds, Thompson said she intends to go to the National Foreign Language Teachers Association Conference, which she said has “always been a bucket list item.” She also plans to attend a two-day virtual workshop on CI and the Indiana Foreign Language Teachers Association Conference, taking any further knowledge she gains back to share with the rest of her department.

“One of the things that stuck out to us about Ginger Thompson is her passion for continual learning,” said Jud Fisher, president and CEO of Ball Brothers Foundation. “The Excellence in Teaching Award is intended to recognize teachers who demonstrate in their classroom critical thinking, problem-solving, creativity and collaboration. Through her approach to teaching and her proven dedication to bettering herself so she can better her students, Ginger is a perfect representation of these values.”

Kahalekomo’s “community helpers” unit introduces a fun, engaging way for students to learn about the roles of community helpers, like doctors, vets and police officers, while practicing their language, math, motor and teamwork skills. For example, after learning about police officers, students worked together to solve the mystery of “who stole the cookies?” by solving clues with math problems, ordering numbers from least to greatest, identifying rhyming words, popping balloons, completing puzzles and more.

Wood emphasizes real-world application of math skills in her classes. Instead of a traditional paper-and-pencil final exam, she presents a problem to which students can relate; this year, she’ll be asking students to solve a real-world scenario with the use of a parabola. For these problems, students are given access to the internet, their class notes and can even consult experts. This non-traditional approach not only demonstrates mastery of skills, but it also inspires students to see how advanced math can be used to solve real problems they may come across in life.

As finalists, Kahalekomo and Wood each received a grant of $1,000 to be used in their classrooms and $500 for professional development.