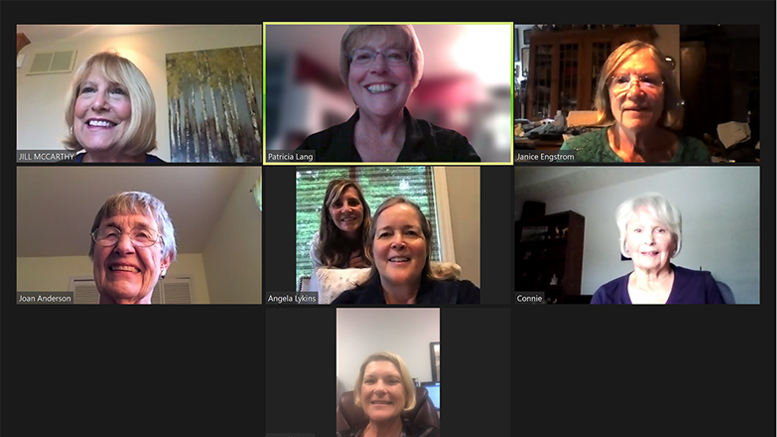 MUNCIE, Ind.—It’s not Plunder and Lunge. It’s Ponder and Plunge, a woman-only stock club in Muncie, Indiana. The name says it all, with emphasis on the PONDER part. The club recently celebrated 50 years of stock investment education.

The club was founded in 1971 by four accomplished Muncie women: Esther Ball, Thelma Hiatt, Martha Wickham and Aline Emens. All of these women began as teachers and had remarkable careers. Esther Ball served the war effort as a cryptographer, for example. All were associated with Ball State University, in Muncie Indiana.  All were long-time members of the club (16-19 years).  All were active volunteers in the Muncie community, and all lived into their nineties.

The purpose of Ponder and Plunge (or P & P) was to provide women with a forum to learn about stocks and stock investment strategies and to ‘try out’ the market while sharing the risk. More importantly, it allowed the women to make stock investment decisions, affording them confidence and independence.

Since the club by-laws limited the total membership to twenty, a new member could only join upon the resignation of a current member. Thus, each of the 91 members over the 50 years could trace their lineage. Ten Muncie women were members of Ponder and Plunge for 20 years or longer including Kate Pingry; 20 years, Nancee Kinghorn; 21, Fidelia Risk; 26, Mary Ann Olinger; 27, Marge Ziegler; 29, Phyllis Yuhas; 30, Ruth Covalt; 33, Jeanne Brenneman; 34, Margaret Bumb; 35, and Jo Baur; 41.

What was one of the most profitable investments?

One of P & P’s unfortunate investments was holding stock in RIG, a large drilling company named TransOcean Oil which was on an upward trajectory. But their rig, Deep Water Horizon, had one of the largest marine oil spills in the gulf in 2010. The ladies sold their 150 shares within a week after the spill for $72.40 and minimized their loss to less than $900.

Membership numbers stayed at around 17 for the last twenty years until 2019. When COVID hit, P & P met via Zoom, but the members thought it difficult to recruit new members when one could not meet in person. Many of our longer-term members decided it was a good time to bow out of the club due to personal circumstances. By late fall of 2020, P & P was down to five stocks and 8 remaining members. We regrettably decided it was time to dissolve the partnership.

Some of the members reflect on what the investment club has meant to them. From one of the newer members Jill McCarthy: “I am deeply grateful for the vast knowledge and skills I gained on investing and teamwork in my 3 years with this club.”

From member Janice Engstrom Feldheiser, “In my 20 some years, I not only made such good friends but money too. We debated principles, learned together, taught each other, and came up with investment ideas. I learned there is power in collaboration and exchanging knowledge.”