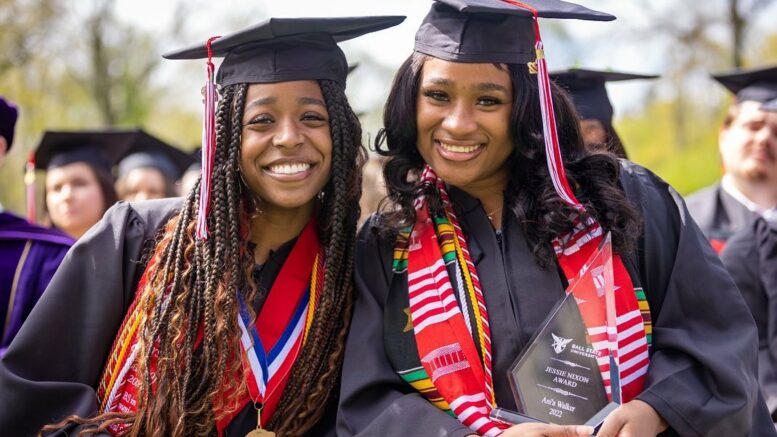 MUNCIE, Indiana – For the first time since the onset of the COVID-19 pandemic, Ball State University on Saturday returned to its traditional setting for its Spring Commencement ceremony.

At the main ceremony held Saturday morning on the Old Quad, Ball State conferred more than 3,400 doctoral, specialist, master’s, and baccalaureate degrees for its Class of 2022. University President Geoffrey S. Mearns, speaking from the stage on the Fine Arts Terrace, encouraged the graduates to take a moment to appreciate the opportunity to play a vital role in a University tradition more than 100 years in the making.

“As members of the Class of 2022, I hope you appreciate what it means to be part of this special tradition—our annual Commencement ceremonies. A tradition that began with those 10 students more than 100 years ago. A tradition that has invoked the pride of more than 200,000 graduates who have sat on the chairs on this lawn, ready to receive their degrees and embark upon their future lives—just like all of you,” President Mearns said.

During the main ceremony, the University bestowed journalists and best-selling authors Deborah and James Fallows with honorary doctorates of arts, formally recognizing the couple’s influence on American culture through their insights on politics, foreign affairs, and life in cities and towns across the country.

Upon reading the Fallows’ 2018 New York Times bestselling book, Our Towns: A 100,000-Mile Journey into the Heart of America, President Mearns invited the couple to Ball State to witness the good things happening in and around Muncie. Since that initial visit, the Fallows have written several articles featuring Ball State’s innovative partnership with Muncie Community Schools, among other points of pride in the community.

“Deb and Jim, I am grateful for the work that you do every day in this respect,” President Mearns told the Fallows during Saturday’s Commencement ceremony. “Through your reporting and through the leadership of your foundation, you are promoting greater civic engagement, community renewal, and genuine dialogue among the citizens of our country.

“In honoring you today, our University recognizes your combined lifetime accomplishments as accomplished journalists and authors,” President Mearns continued. “With this award, we also recognize our shared belief—as individuals and as an institution—that communities are strengthened when people take responsibility for the world that exists just outside their front door.”

In their speech to Ball State graduates, the Fallows encouraged students to lead engaging, fulfilling lives as they begin their next chapters.

“Because of your hard work, you are now in an enviable position—you are about to receive a degree from a wonderful university with a stellar reputation. You are ready to turn in any direction you put your minds and energy toward,” Dr. Deborah Fallows said. “With such a privilege comes responsibility—responsibility to those who have invested in you and to the people of the world, with whom you’ll be sharing your time on this Earth. Please do your best to lead an engaged and generous life, with optimism and passion. And one that benefits your fellow women and men.”

“Talk is cheap, and community engagement is hard. But in your time at Ball State, your school has shown in detail how it looks to live the message that members of the community rise or fall together. That’s an example of intentional inclusion that today’s America desperately needs, and that you can carry with you for tomorrow’s America—wherever you end up living, whatever you end up doing—as you think about this place, and what you have learned here,” Dr. James Fallows said.

Mr. Dobbs was honored on Friday with the President’s Medal of Distinction, recognizing his dedication to the world of finance and his generosity to the University. Mr. Dobbs, who earned a bachelor’s degree in Finance from Ball State, is an April 2022 Miller College of Business Hall of Fame inductee. In addition to his investment in his alma mater, Mr. Dobbs and his wife, Teneen, support a range of religious, scientific, literary, and educational causes through the William Craig and Teneen L. Dobbs Charitable Foundation, which the couple established in 2010 along with the Children’s TherAplay Foundation in 2001.