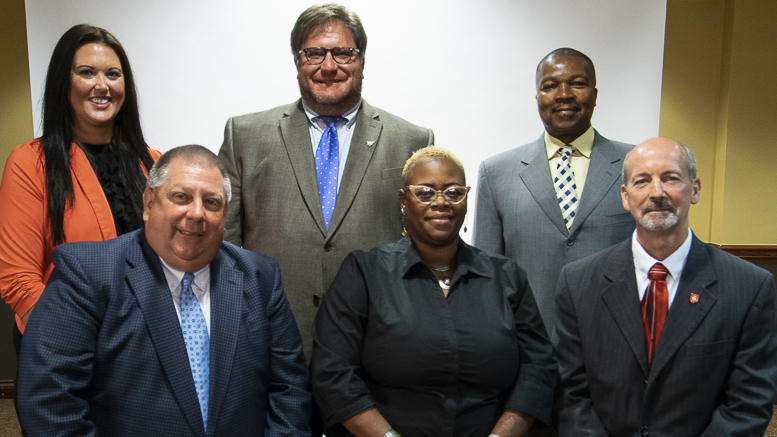 MUNCIE, Indiana – In its final meeting of the 2021-22 academic year, the Ball State Board of Trustees heard an update on the University’s groundbreaking partnership with Muncie Community Schools (MCS), and four members of MCS’ Board were reappointed.

In July 2018, Ball State and MCS embarked on a historic partnership to provide excellent public education to every student in Muncie. Ball State received oversight authorization of MCS from the Indiana General Assembly in May 2018.

The University appoints a seven-member governing board for MCS—five members appointed by the Ball State Board of Trustees, based upon recommendations from Ball State President Geoffrey S. Mearns, and two members appointed by President Mearns (one chosen from three nominations by the Muncie Mayor and one chosen from three nominations by Muncie City Council).

“The seven-member school board has been fundamental to maintaining our work and executing our collective vision,” President Mearns said. “Their direction, combined with the leadership of Dr. Lee Ann Kwiatkowski, CEO and Director of Public Education, has resulted in positive outcomes for our partnership and continued success for MCS. I am grateful to them all.”

The four reappointments ensure the composition of the MCS Board (which also includes Dave Heeter, Jim Lowe, and Mark Ervin) remains the same as when the Ball State-MCS partnership began.

“Our commitment to Muncie Schools is a long-term commitment,” said Ball State Board of Trustees Chair Renae Conley. “Maintaining the composition of the school board, we believe, is imperative to ensuring continued, consistent results.”

During his presentation, President Mearns highlighted several vital areas of continued success in the Ball State-MCS partnership: enrollment stabilization for the district, balancing of the budget, and continued increase of teacher compensation and retention.

Enrollment at MCS this year (5,082 students) was the highest for the district since the 2018-2019 school year. MCS saw an increase (nearly 100 students) year over year—the first time that has happened since 2006. The total student count this school year extends a four-year trend of stabilized enrollment.

Regarding the budget for Muncie Schools, President Mearns highlighted four consecutive years (every year of the Ball State-MCS partnership) of higher revenue than expenditures for the district. In seven of the nine years prior to the partnership, from 2008-2017, MCS operated at a loss, with more expenditures than revenue.

A focus on increasing teacher salaries and improving retention has also continued at MCS. During the 2022-23 school year, MCS teachers will receive the largest pay raise (approximately 14.7 percent) in district history. Prior to 2018, MCS teachers and staff had not received a raise in 10 years. Increased compensation, greater professional development opportunities, and a shared sense of optimism in the district have catapulted teacher retention rates from 67 percent to 88 percent during the partnership.

“I am inspired by the work and dedication of everyone involved in this partnership—from the leadership of MCS, the MCS teachers and staff, the students and families of the district, and the members of the Ball State community,” President Mearns said. “Together, we are stabilizing our public school system while improving the quality of life and education in Muncie.”