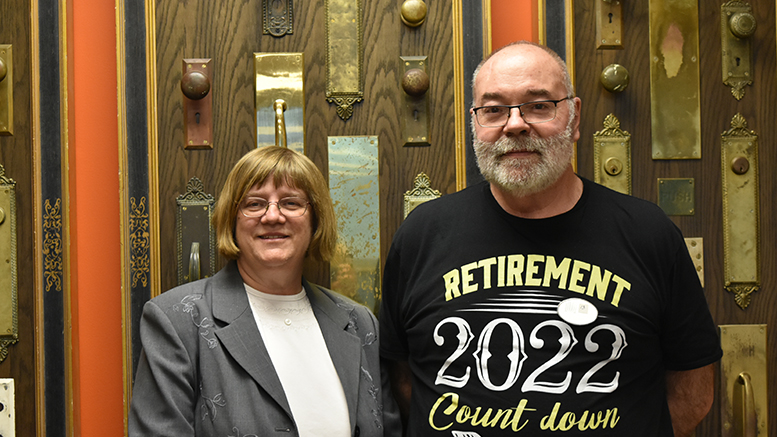 Bartling has been at MPL since 1972. He was 16 years-old and working as a newspaper delivery boy when one of his customers, Ermal Johnson, an MPL librarian, suggested  he should apply for a route driver position at the library. He did and was hired. That part-time job became his lifelong career as he moved from part-time to full-time and learned the ins and outs of maintaining the library facilities, its heating and cooling systems, and the janitorial needs of a busy, multi-branch organization. Bartling is ending his career on January 31 after more than 49 years of dedicated service.

MPL Library Director Akilah S. Nosakhere praised Bartling’s contributions to MPL by saying, “Rarely does one have the opportunity to work with an individual who has such a long career served in one place. Gary’s dedication to MPL over the years is evident in the way he cares for our buildings, saves ‘good parts’ of broken equipment, and freely shares his years of mechanical insights with his staff. I count the blessings that Gary represents. He has an amazing sense of humor and I can’t help but smile and stop to chat with him when I see him working at any of the MPL branches. I will miss that.”

An open house reception will be held in Bartling’s honor on Thursday, January 27, 2022 from 4-7 p.m. at Carnegie Library at 301 E. Jackson Street in downtown Muncie. No RSVP is needed and the event is free and open to the public. Light refreshments will be served.

Kroehler earned her Bachelor of Science in Education degree from the University of Wisconsin-Whitewater in Broadfield. She was a Social Studies/History major with a Library Science/AV minor. She later earned her Master of Arts in Library Science from the University of Wisconsin-Madison. After moving to Muncie she earned a Master of Arts in Executive Development for Public Service from Ball State University.

As the Library Assistant Director, Kroehler serves as supervisor to several employees, maintains all financial reports and other documents required by the state of Indiana, serves as Treasurer to the MPL Board of Trustees, and assists in all Human Resources activities of MPL, an organization with approximately 70 employees at the four branch locations.

Nosakhere also praised the work of Kroehler.  “I met Beth in 1984, when we worked together to produce the first computerized collection of local social services for MPL reference staff,” she said. “At the completion of the project, I moved on and Beth remained with MPL where her analytical nature and boundless “Can DO” energy fueled her rise and success over the years. While I will miss her valuable input, I’m sure she will enjoy spending more time with her family and her favorite pastimes.”

An open house reception will be held to honor Kroehler on Thursday, March 24 from 4-7 p.m. at Kennedy Library at 1700 W. McGalliard Road. The event will be free and open to the public and no RSVP is required. Light refreshments will be served.

Successors for Bartling and Kroehler have been named and both were selected from inside the MPL organization. Michael Kelly, who has worked with Bartling for 12 years was promoted to the position of Facilities Manager. Katherine Mitchell, an employee of MPL since 2002, was selected as the new Library Assistant Director following a national search conducted by a committee comprised of MPL employees, board members, and community members. Nosakhere reflected on the retirements and the new appointments, “By recognizing the talent and experience of existing staff, MPL retains a sense of continuity as we celebrate the passages and achievements of our industrious and talented staff while planning for a bright new future.”

For more information regarding the planned retirement open houses, visit the library website at www.munciepubliclibrary.org