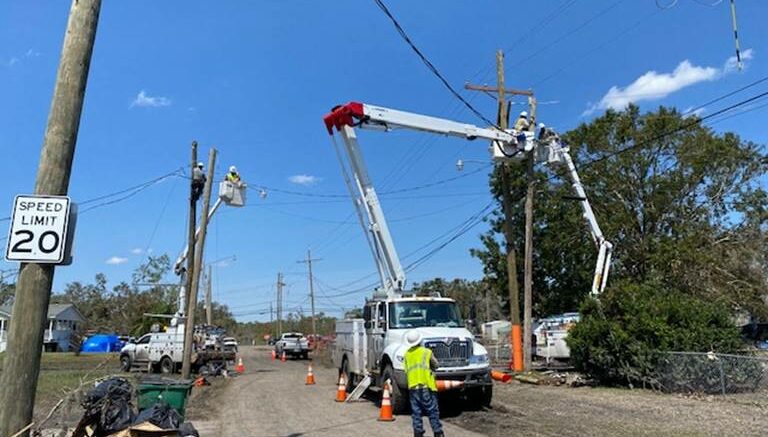 Presented to EEI member companies, the Emergency Response Awards recognize recovery and assistance efforts of electric companies following service disruptionscaused by extreme weather or other natural events. The winners were chosen by a panel of judges following an international nomination process, and the awards were presented during EEI’s virtual winter Board of Directors meeting.

“This year brought several significant storms and other extreme weather-related events that impacted many customers and communities across the nation,” said EEI President Tom Kuhn. “Indiana Michigan Power, and its

employees, worked around the clock following Hurricane Ida to ensure that power was restored safely and as quickly as possible. I applaud I&M and its employees for their unwavering dedication to the customers and to the communities they so proudly serve, and, I am honored to present them with this well-deserved award.”

Following Hurricane Ida, on Sept. 1, I&M crews traveled more than 2,000 miles to Louisiana to answer the call for help and they returned home safely Sept. 14.

In total, I&M employees worked more than 100,000 hours, and the company dispatched more than 130 company and contractor trucks,as part of its mutual assistance restoration efforts.

“This past year was marked by numerous severe weather events on top of the global pandemic, showing how fortunate we arethat our employees are always willing to go above and beyond to help others when they need it most,” said Steve Baker, president and chief operating officer of Indiana

Michigan Power. “Restoring service is critical for communities rebuilding after a storm. I’m proud of the team that helped provide mutual assistance to Entergy customers. They traveled a long distance, were away from their families and worked in adverse conditions.”

While restoration efforts are not new to I&M’s team, Hurricane Ida’s wrath brought challenges for crews that were working longdays in the heat and humidity. Beyond the hot weather, the devastation in the area by flooding and high winds presented access issues for places that needed restored. Crews faced washed-out roadways, debris and downed trees throughout their time there.

“In the spirt of true line workers, they persevered along with thousands of others, and got the job done quickly and safely,” Bakeradded.

According to the National Weather Service, Hurricane Ida, a Category 4 hurricane, was one of the strongest storms to ever makelandfall in Louisiana. Ida made landfall with maximum sustained winds of 150 mph.

The restoration efforts following the damage from the storm were extensive.

The number of poles damaged or destroyed was more than Hurricanes Katrina, Ike, Delta and Zeta combined.

EEI is the association that represents all U.S. investor-owned electric companies. Our members provide electricity for more than 220 million Americans, and operate in all 50 states and the District of Columbia. As a whole, the electric power industry supports more than 7 million jobs in communities across the United States. In addition to our U.S. members, EEI has more than 65 international electric companies, with operations in more than 90 countries, as International Members, and hundreds of industry suppliers and related organizations as AssociateMembers.