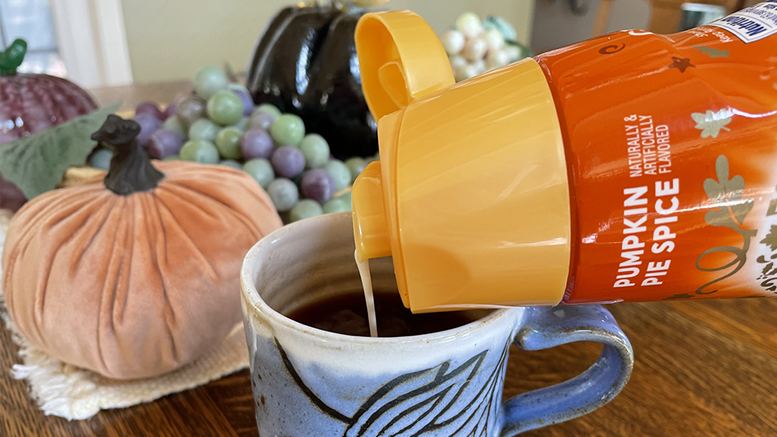 What’s infused with pumpkin spice? These days it’s more like, what isn’t? Photo by Nancy Carlson

Halloween was a month ago and Thanksgiving more than a week ago. This means by now, any pumpkins still sitting around your house are probably getting wonky.

Nevertheless, as marketing professionals will tell you, the simple joy of making money out the veritable wazoo by embracing some weird olfactory fad means “pumpkin spice” is still inundating our honkers (aka noses).

According to articles I read while engaged in nearly eleven minutes of intense research on the Internet, pumpkin spice’s “debilitating odor” – oops, I meant, “charming scent” – not only “triggers familiar cozy memories” in lots of us, but also “cements itself in our minds.”

Therefore, as a service to Muncie Journal readers, we’re presenting a comprehensive study to expand your knowledge regarding which pumpkin spice products are, and aren’t, worth getting worked up about this time of year.

Not all involve food.

Or say you’re a young lady who thinks guys reeking of pumpkin spice are sexy. You’ll be happy to know you can kick Mr. Smell Right’s pheromones into overdrive by swabbing your armpits with pumpkin spice deodorant, using pumpkin spice cologne, plus bathing your little purse pooch, Miss Fido, using a bottle of pumpkin spice dog shampoo. Oh yeah, and if Miss Fido cooperates in this travesty, you can reward her with some pumpkin spice Greenies dog treats.

Can you even imagine the stimulating effect all that pumpkin spice scent will have on your love life, not to mention Miss Fido’s?

Besides assorted toiletries, of course, there are plenty of pumpkin spice food items like coffee creamer.

I can take that one or leave it.

Another item I found on the ‘Net, however, is a “pumpkin spice latte burger,” the purveyor of which escapes me now. But being a total hamburger freak myself, I don’t mind admitting I’m planning to gobble one down, just as soon as somebody puts a gun to my head and says, “Eat the burger or a bullet, spice boy!”

More meat news from the pumpkin spice front? I hate to break it to you, pumpkin spice lovers, but no matter what fake packaging you have seen, as far as I can deduce Oscar-Mayer pumpkin spice bologna does NOT exist.

Ditto for pumpkin spice Slim Jims, the rumor of their existence being highly exaggerated. Now, I’m a proud citizen of the United States of America, where Slim Jims have remained the same since George Washington packed them in his troops’ lunch sacks for rowing across the Delaware River as a little Christmas excursion  in 1776. But if I really thought the descendants of America’s pioneering meat heroes Slim and Jim were now soaking them in pumpkin spice, I would split for Canada.

No. Make that Mexico.

Um, presumably, but back to meat …

If you are a rabid enough meat-eater that pumpkin spice doesn’t even put you off mouthfuls of your favorite tasty animal product, you can take heart in the fact that pumpkin spice SPAM does actually exist, though not in vast quantities. The folks at SPAM are smart enough to know that only helpless SPAM addicts – meaning Hawaiians, whose state motto reads “Give Me SPAM Or Give Me Death” – are gonna line up for a can or two.

It turns out Canada also has pumpkin spice chicken sausage which, when you think of it, is pretty sad. Like, it’s not bad enough that we humans joke about how entertainingly chickens run around the barnyard with their heads lopped off. The fact that somebody then turns some of them into pumpkin spice sausages seems like the most degrading, de-chicken-izing gesture a human can impose on some poor innocent clucker.

Of course, the addition of pumpkin spice need not spell the demise of all taste treats. You can get pumpkin spice Cheerios. Pumpkin spice ramen noodles. Also pumpkin spice Pringles, Oreos and Kit Kat Bars. Oh yeah, and hummus, too, which begs the question: How much worse can pumpkin spice hummus taste than the regular kind?

Yeah, I gagged, too.

Finally, as for pumpkin spice bathroom tissue, while it’s rumored to be out there, it’s a myth, as the guy who investigated it on the ‘Net reported, though not without regret.

“That’s something,” he asserted, “we could all get behind.”