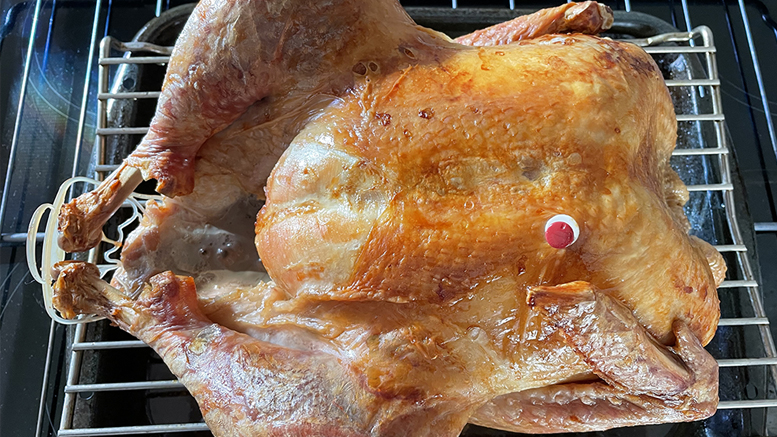 When turkey trauma threatens, be sure to buy yourself a backup bird. Photo by Nancy Carlson

This being just one day away from 2022, I wanted to take the opportunity to celebrate an outstanding new advancement in American meat culture which 2021 brought my family.

But first, some background. If you combine the years we’ve been alive, Nancy and I have lived through 143 Thanksgivings. Even more impressive, if stretched end-to-end and measured consecutively instead of concurrently, those Thanksgivings would go all the way back to 1848, and I think we all know what happened that year. Yes, the signing of the Treaty of Guadalupe Hidalgo. But in all those years, not once did we feel a need to buy a backup bird for Thanksgiving.

Nevertheless, their mere mention of “turkey shortages” caused me to panic. See, Nancy and I always host Thanksgiving dinner, while our fellow Muncie in-laws, Tom and Alicia, host Christmas dinner.

They do ham. We do turkey.

Hosting dinner implies a certain amount of trust on the hosting family’s part that their food of choice is going to be available. I just didn’t want to be sitting there with some stupid, expectant grin on my face when Nancy carried our turkey platter to the table, lifted the lid and apologetically revealed we’d be feasting on Eckrich Lil’ Smokies.

But given my buddies’ scary turkey prognostications, I began having nightmares. You know the kind. In them I’d fear our precious bird had been shipped from Muncie to Bolivia for plucking, then was going to be reloaded naked as a jaybird on the lowest deck of a rusty Panamanian cargo ship for guaranteed delivery back here in time for Thanksgiving dinner.

Thanksgiving dinner 2044, that is.

As a result, Nancy and I vowed if given the opportunity, we’d splurge on two birds just to head off any such shortage.

The first turkey was frozen and a tad scrawny at just 13 pounds, not what you’d call the sharpest beak in the bird box, if you get my drift. Nonetheless, it was a bird and as such, immediately joined my Popsicles in the freezer. Now we were covered if something got screwed up involving our primary bird, which turned out to be a chubby little gobbler weighing in at a solid eighteen pounds who was delivered fresh, right on time for Thanksgiving, by a local meat market.

This taught me there’s only one real downside to buying two birds. That’s because your spare bird, even one weighing just thirteen measly pounds from having joined Weight Watchers in a last-ditch effort to dodge the Thanksgiving dinner table, eats up a lot of freezer space. This is normally room you would devote to healthy foods to get your New Year off to a nutritional start, such as Steak-umms, Klondike Bars and White Castle Frozen Breakfast Sliders.

Anyway, our primary bird saw us ably through Thanksgiving.

But just a couple days before Christmas, needing more freezer room for some vitamin-packed Totino’s Pizza Rolls we were hoping to invest in, we decided it was time to dig Turkey Number Two from the freezer and eat it, too.

Eating another turkey almost seemed weird this late in the year, kind of a case of turkey overload or turkey déjà vu. Knife in hand, you were thinking, didn’t I already do my Norman Bates-shower-scene-from-“Psycho”-thing, hacking away at the cooked turkey carcass a few weeks ago?

Then you remember: Oh yeah, that was our first bird.

Here’s one thing nobody tells you about buying two turkeys. Oddly enough, the process of cooking and eating two birds sort of mimics the stages of how we humans deal with grief.

There’s shock, as in “I’ve eaten two turkeys? But I’m not even full yet!” There’s denial, as in, “If I ate that second bird, how come there aren’t any feathers stuck to my lips?” And there’s depression, as in, “If I get to heaven and the first thing I hear inside the pearly gates is a godly, authoritative “GOBBLE!” my butt’s gonna be in deep doo-doo.

Nevertheless, I’d have to say that, aside from the possibility of unanticipated eternal consequences, our two-turkey plan worked out quite nicely.

For one thing, our kitchen got that delicious smell of roasting turkey twice. Also, about the time I was wishing we had more more turkey left for additional turkey sandwiches on rye with mayo and Dijon mustard, danged if we didn’t have a whole extra bird’s worth!

So I guess I can already see how this is going to play out in years to come. Buying a backup bird will become second nature, a matter of routine. Then there’ll be shortages in, say, yams, to which I’ll be like, who gives a rat’s patootie? But there will also be shortages in Wick’s Sugar Cream Pies, to which I’ll be hollering “God bless us, everyone!!!” like Tiny Tim while buying ten or twelve backup pies.

Yeah, that should work.