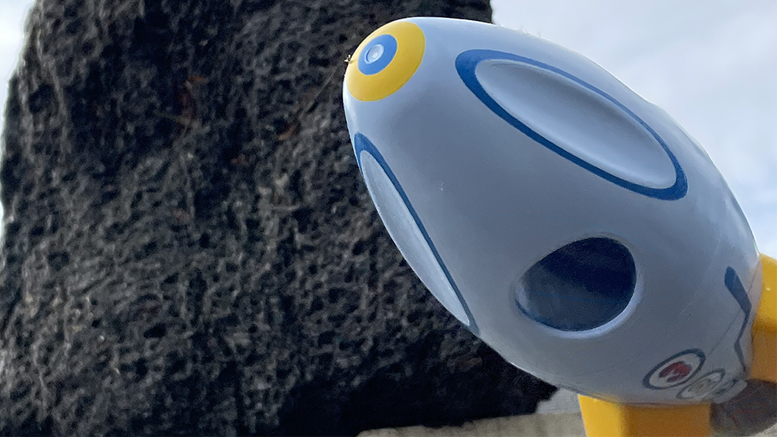 This sophisticated illustration of stalking an asteroid is rife with space drama. Photo by Nancy Carlson.

While walking nighttime laps around Yorktown High School’s football field about twenty years ago, I saw an incredible sight.

It looked like an airplane at low altitude enveloped in flames, passing over the field from east to west. Having done a bit of flying myself, I knew any poor soul strapped into that thing was toast. But when no word of a missing plane came the next day, the truth dawned on me.

It must have been a meteorite.

In the realm of meteors and meteorites, meteors are those tiny bits of space dust that leave spectacular but harmless spark-like trails as they streak across our atmosphere. It’s the bigger, far more dramatic chunks of space rock called meteorites that announce their earthly presence like hellish fireballs. Anyway, ever since that night, I’ve had a healthy respect for meteorites inspired by the fact that, technically, they can land on your head.

Still, those rocks generally burn up entering our atmosphere.

Asteroids are another matter entirely.

This explains why NASA has my enthusiastic backing for its new Double Asteroid Redirection Test, also known as DART. It will determine – should a killer asteroid capable of wiping out mankind be spotted heading for Muncie  – if we can fire rockets to redirect it.

And no, I don’t mean toward Anderson.

For one thing, we could quit worrying about whether the Colts were gonna make the playoffs.

The answer is no.

If certain pre-civilization cosmic “boo-boos” are any judge, in fact, no place in the whole wide world of sports would have to worry about a team making the playoffs. Instead, millions and millions of folks would be wishing they’d bought one last turkey sandwich at Subway before some frickin’ asteroid turned Earth into a place with all the charm of a smoking, reeking landfill.

Just FYI, that’s why you’ve never seen an artist’s conception of a Tyrannosaurus rex from back in its halcyon days.

They’d have been wearing shades and drinking coconut milk cocktails alongside pretty lakes, satisfied grins plastered on their toothy faces while pondering what they were going to rip apart for dinner with their dinky little arms. Sushi? Chili-cheese dogs? After all, dinosaurs had run the Earth for one-hundred-sixty-five million years, plenty of time to develop opposable thumbs and tasty ways to use them. But then one bleak day sixty-six million years ago in Mexico, scientists believe, our Earth was hit by a six-mile-wide asteroid, causing the dinosaurs, for lack of a better description, to “bite the big one.”

As a result, in modern renderings of Tyrannosaurus rex based on the facial expressions of their dug-up remains, they all seem extremely pissed off. For them, the good old days at the top of the food chain were over.

It was time to let cockroaches run the world for a while.

So if we humans don’t want to turn things over to the cockroaches again, it’s good NASA is doing what it can about the asteroid situation. However, that’s not to say we’ve already got the problem licked.

For one thing, I have serious questions about the folks in charge of DART. Millions of us were stupid college kids once. What if a killer asteroid shows up during the work shift of a rocket scientist who just happened to get a D in Asteroid Bashing 101? Not good.

In my column research, I actually watched an animated video of DART intercepting an asteroid the size of Lucas Oil Stadium. Closer and closer the NASA spacecraft came to the asteroid until, at the last second, I ducked and screamed in spite of myself!

But then I’m like, what? Excuse me? This simulated collision looked more like the kind of “Doink!!!” a football makes when a kicker bounces it off an upright in a failed attempt at a point-after-touchdown. And why wouldn’t it? Even NASA admitted their spacecraft was only the size a refrigerator. Given that, I couldn’t allay a sneaking suspicion that inside its “warhead” were a pickle jar, a half-empty tub of ham salad and some leftover pizza.

Also, I should have foreseen my overall disappointment in this video demonstration as soon as I learned the two asteroids chosen for DART targets were Didymos and Dimorphos.

What kind of killer asteroid names are those?

Can you picture us earthlings staring terrified into the heavens screaming, “Yikes! It’s Didymos and Dimorphos!!!!”? Me neither. They sound more like Old Testament goat-tenders. I mean,  guys named Didymos and Dimorphos would probably have a hard time making it through a day at Central High School without somebody taking their lunch money.

Now we want them to help train us to save the world?

I’d be more confident if these asteroids were named Rocky Balboa and Dirty Harry Callahan.

But since DART won’t make contact with the asteroids until September or October of 2022, there is ample opportunity to rename them something more commensurate with their capability of blasting Earth back in time a few eons.