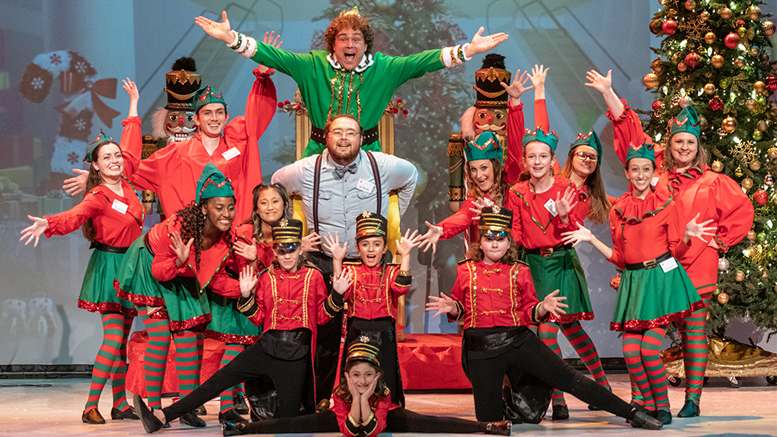 MUNCIE, Ind.—The toussled hair. The childlike grin and sparkle in his eyes. The spreading of Christmas Cheer by singing loud for all to hear. The, um, pointy shoes and hat.

It’s hard to imagine a better fit for the holiday production of “Elf the Musical!” than Ashton Freeman.

“I’ve always been a kid at heart,” Freeman said. “Many friends said I would be a good fit for Buddy and encouraged me to try out for the role. Plus I do have the right hair for Buddy!”

If you are not familiar with the story, we will let the show’s director, and Muncie Civic’s Executive and Artistic Director Laura Williamson, explain.

“If someone hasn’t seen the film, I would describe ‘Elf the Musical!’ as a classic ‘fish out of water’ story (think “The Little Mermaid,” “The Beverly Hillbillies,” “3rd Rock From the Sun,” “Ted Lasso”),” Williamson said. “The main character in this case, Buddy the Elf, is trying to fit into a world where all he does is stand out – setting up endless comic scenarios. It maintains the same theme of how Buddy’s childlike innocence and unconditional belief in the people around him has the power to charm, and eventually change people, as they see themselves through Buddy’s kind and loving eyes.”

The difference from the film, Buddy, er, Freeman added, “is that it’s a musical! It has the same magic as the movie but with a fun, jazzy soundtrack.”

A perfect edition to Civic’s annual holiday production tradiation, Williamson said. And audiences will get more opportunities to see the show.

“Civic shows have an average performance number of 10 shows during a run,” Williamson said. “’Elf the Musical!’ is planning on 19 shows! It’s been an incredible commitment for the cast and crew. This is the first time we have used so many understudies for larger roles, due to the huge time commitment.”

Freeman has really enjoyed the rehearsal process. The best part, he said, was “getting to know the character I’m playing and how best to portray that person.”

“And since this is community theater, I love meeting and getting to know the people involved in the show,” he added.

People like Charity Hanna-Arrnold, who in additon to working on the set, also provided large oil paintings for the production.

“Muncie is home to an incredibly talented visual artist, Charity Hanna-Arnold,” Williamson said. “She has a signature, whimsical style to her paintings. Several scenes in “Elf, the Musical!” take place within the world of a children’s book publishing house. I asked Charity if we could use some of her paintings as the enlarged covers of children books, to help put us in this world. She agreed, and then began imagining all of the scenes in the show, and how the consistency of color and style could be achieved and provided a unique through-line to the story.

“This is no small task considering the number of locations, and fantastical, storybook like nature of the entire show. Charity is a treasured friend to me. This isn’t our first adventure at Muncie Civic Theatre, but it is definitely our biggest! I hope that the community can come to recognize her talent! Charity was raised in Muncie, and then left for 15 years – she moved home with her husband and son to be closer to family a few years ago, and I’m so glad that she did!”

“I hope they leave the show with some Christmas spirit!” he said.
“I hope that audiences are reminded that when we choose to see and believe the best about the people who are in our lives, that we are offering them an opportunity to become a better version of themselves,” Williamson added.

Think of it as some much-needed “elf” care.

Thursday, Friday and Saturday evening shows will begin at 7:30 p.m. Saturday and Sunday matinees will begin at 2:30 p.m. The Sensory-Friendly Matinee will be 2:30 p.m. Dec. 11. Masks will be required and no concession performances will be Dec.12 and 16.

For tickets and more information, call (765) 288-PLAY or go to www.munciecivic.org.