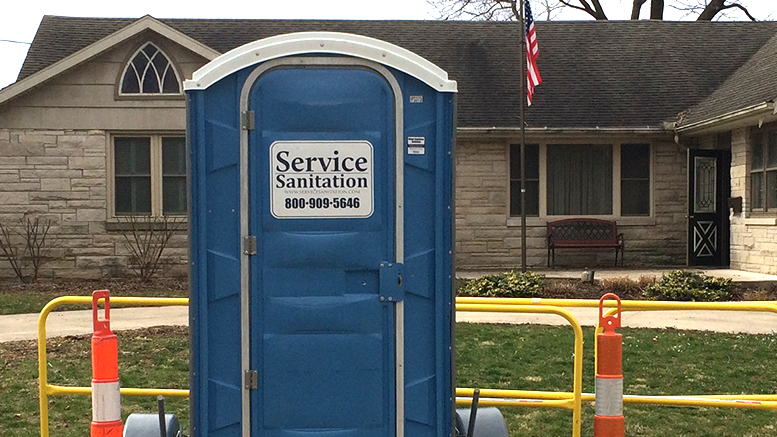 This is NOT the ancient toilet that was uncovered by archeologists in Israel. Photo by Nancy Carlson.

Every now and then, when you think 2021’s troubles with the pandemic, raging forest fires and global warming have become too much to bear, you encounter a story that makes you count your blessings.

I did. Ever since then I’ve felt pretty good about living now. Back in Israel 2,700 years ago, only the richest of the rich could afford toilets. This fact was supported by a recent archeological dig that found a rare toilet in the ruins of an ancient mansion.

What conclusion can be drawn from this?

First, when it comes to luxuries people take for granted until they disappear, toilets should rank right up there with Netflix and Cuisinart food processors.

Way back when an upwardly mobile go-getter who perhaps owned a herd of sheep shared his fondest dreams with his future bride, he probably stared deeply into her eyes and vowed, “Someday, I promise … you’re gonna be sitting on a toilet, Sweet Cheeks.”

And Sweet Cheeks would swoon and think, “This guy’s a keeper!”

What other conclusion can be drawn from this?

If Nancy and I were living in Israel 2,700 years ago, we would be numbered among the ultra-wealthy. That’s because our house, which isn’t large, has three toilets, assuming one of them’s not temporarily out of commission.

What’s more, our toilets also have these shiny little levers mounted on the sides that you push to make them flush.

In that, they are far superior to 2,700-year-old toilets, one of which was pictured with the article I read. Instead of a shiny lever, it featured a hole about five inches across. This was not a hole equipped with some hundred dollar Gel Foam padded seat, though the lack of a seat wasn’t a totally bad thing. Having no seat negated one major problem that has ended countless marriages. Twenty-seven-hundred years ago, nobody ever heard of a ticked off wife yelling at her husband, “Ya left the seat up again last night, moron!”

On the other hand, this toilet being a simple hole cut into a limestone slab, you wouldn’t have wanted to pass the morning reading The Jerusalem Times on it, no matter how good the funnies were. But given the fact it was a flat limestone, at least you didn’t have to hang on for dear life while … well, you know.

Based on my limited experience using portable toilets, one thing rich folks undoubtedly did 2,700 years ago was glance warily at the hole before positioning themselves over it. What, they wondered, might be lurking down there besides the obvious? This is an experience I nervously replicate when using modern day Port-O-Lets, one of which was actually placed in our front yard for three days this spring by a street construction crew.

Confronted with a portable toilet, I always imagine there are hornets, scorpions and maybe even copperheads inside.

What threats did users face back in biblical times? Snakes called asps! Even Cleopatra was killed by an asp, though I’m not sure she was bitten down … um … there. Those being the days when God threw his weight around to remind folks who was in charge, He sent loads of plagues, including frogs. That means there could have been frogs in the toilet, too. Personally, I have nothing against frogs. Nevertheless, I’d have hated sitting on a 2,700-year-old toilet during a frog plague with hundreds of them bouncing off my buns in desperate bids for freedom.

Underneath this hole was a limestone septic tank, according to a report by Smithsonian magazine. What wasn’t found, however, was an invoice from an ancient camel-mounted septic service owned by a guy whose nickname was, say, Humpy. Consequently, the archeologists’ believe that the limestone septic tank was cleaned out periodically by the rich folks’ servants. Unless these particular servants were extraordinarily understanding individuals, I’m guessing that, like some of us in 2021 A.D., they thought life in 679 B.C. pretty much sucked.

Hard to blame them, really.

Another thing archeologists didn’t find was evidence of the shiny pieces of hardware required to hang ancient rolls of Charmin toilet paper from a wall. In fact, archeologists believe Charmin was in even shorter supply back then than during our COVID-related hoarding days. This is confirmed, in part, by the total absence of gaudily decorated toilet paper cozies crocheted some 2,700 years ago by talented, craft-loving Israeli grandmothers.

Other non-discoveries? Things being pretty basic in those days even for the super-rich, no evidence has been found of aerosol spray cans of Frankincense and Myrrh Scented Glade.

How do archeologists explain this?

It’s generally well known that the centuries between 2,700 years ago and even a thousand years later aren’t fondly named by toilet enthusiasts as the Golden Age of Toilet Advancements. Indeed, archeologists uncovered the writings of one prominent scholar who was born a thousand years after this ancient Israeli toilet was installed. The guy wrote that, in his humble opinion, the height of coolness would be having a toilet hole located right next to his dinner table.

Right next to his dinner table?

I think we can all be grateful that advancement didn’t catch on.