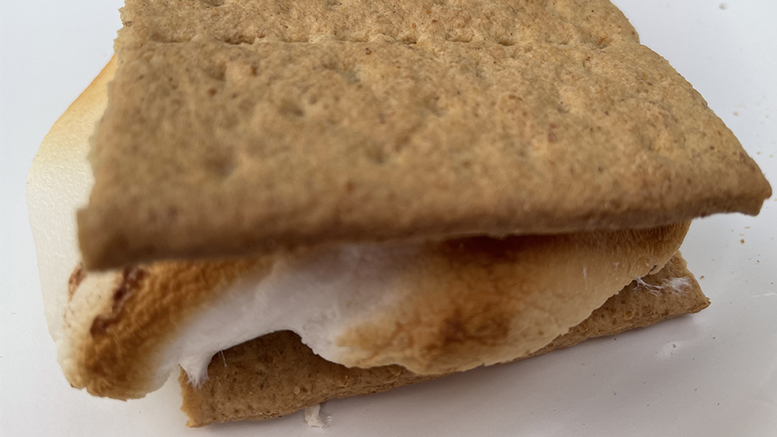 How beautiful is a s’more? This tasted as good as it looked. Photo by Nancy Carlson.

Recently, I ate a s’more.

Granted, there are probably thousands of campers and other such folks out there who eat hundreds of s’mores every year, but I’m not one of them. In fact, I’ve only had a handful of s’mores in my whole life, my second-to-previous one being beyond my memory.

But I have to tell you, that most recent s’more was darned tasty.

So when Nancy announced we were going to make s’mores, I got excited. But then I thought, wait a minute. Don’t be so selfish. There are probably people in China and New York City who’ve never eaten a s’more, people who don’t even know what a s’more is! So that’s when, as a public service, I decided to write this column.

First, dig out your graham crackers. You know the ones. You bought them as emergency rations when you found your grocery store’s bread shelves empty just before East Central Indiana got plastered by the infamous ice storm of 2005. Yeah, the same graham crackers that have been inexorably working their way to the far reaches of your larder ever since.

Once you find them, open the box and remove a package. Do the graham crackers look like they’ve been nibbled on by a tiny buck-toothed rodent nicknamed Micky? When you open the package, do the graham crackers look like sawdust? Week old oatmeal? The squishy insides of a pumpkin left on your front porch for a month after Halloween? If so, get in your car, drive to the grocery store and buy some fresh ones.

While there, try to remember if you have any Hershey chocolate bars at home. Being a novice at s’mores making, you’ll want to be a traditionalist, even a purist, and Hershey’s chocolate bars are the only ones officially certified for use in s’mores. While you are considering buying them, remember this: Don’t get all uptight about the calories and then decide maybe you’ll just buy some carrots instead. If there’s one thing you can’t have enough of around the house, it’s Hershey’s chocolate bars, a couple of which will also taste a helluva lot better than carrots on the drive home.

Back home, dig the marshmallows from the same recesses of the larder where the graham crackers disappeared sixteen years ago. Do they feel like petrified wood? Don’t worry. Even if they’re hard as rocks, a few minutes over burning logs should soften up those babies enough for edibility.

Then think, wait a minute …

Starting a fire is a hassle, and hey, we own a stove, don’t we?

As soon as you think this, immediately cast the thought from your mind. The fact is, I had that same thought way back when I was just a stupid kid in my fifties. This happened one Saturday morning as the rest of my family was sleeping when I thought, you know what’d make a nourishing breakfast?

So, after impaling a couple marshmallows with a fork and cranking one of our stove’s burners up to high, I held them over the burner until they were beautifully bubbly and brown, then hungrily stuck them in my mouth.

I’ll never forget what I said next.

That’s because the fork’s red hot tines left a fork-shaped brand on my tongue’s pink, tender flesh. My tongue now looked like a cow from the Triple Tong Ranch.

“HEP!!!!” I screamed for Nancy through a pronounced and excruciating lisp. “HEP!!! I HAP VERWEE BADWEE BURNT MY TON!!!”

When Nancy finally ambled into the kitchen to ask what all the screaming was about, she didn’t have a whole lot of sympathy for me.

The entire following week I spent talking like Elmer Fudd.

So anyway, take it from me. Make a fire. Stick your marshmallows on a certified marshmallow roasting stick. Hold them over the fire. Then when they’re roasted, break a graham cracker in half, lay a portion of the Hershey bar or all of a Reese’s Peanut Butter Cup on it, then place your roasted marshmallow on top to melt the chocolate. Then top it with another graham cracker.

You will notice right off the bat that your s’more tastes great, the mix of graham cracker, marshmallow and chocolate (or chocolate-covered peanut butter) being a match made in heaven. By the way, with just one taste, you’ll also understand why when it comes to s’mores, it’s vital to stick with graham crackers instead of substituting, say, Cheezits.

You should also know that s’mores can be messy as heck, especially when the melted marshmallow goop runs stickily all over your fingers, so take it from me, guys: If you’re gonna need to use the restroom in the foreseeable future, do it beforehand.

Other than that, bon appetit! 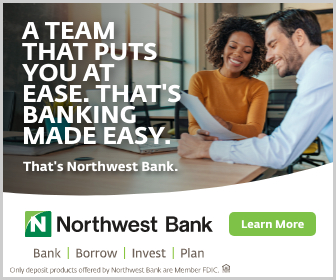