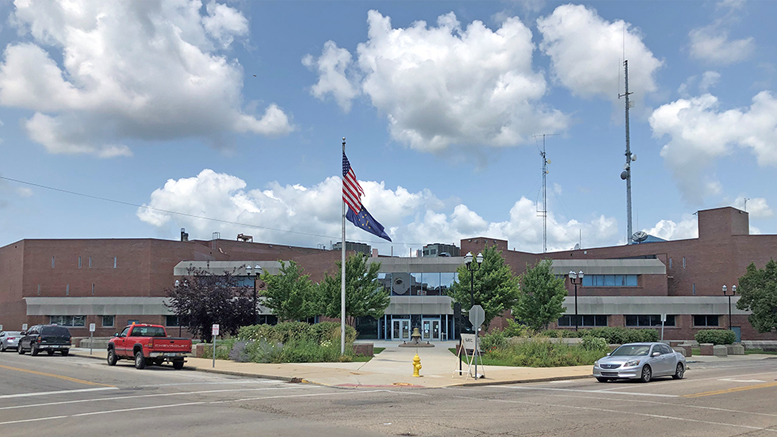 By Corey Ohlenkamp, Director of Communications, City of Muncie—

Muncie, IN— East Central Indiana Regional Planning district voted on Wednesday to transfer the former Delaware County Justice Center in the heart of downtown Muncie to the City of Muncie leadership in a joint partnership to further site development.

The agreement between the City of Muncie and county officials will serve as a first step to bringing that location back on the tax roll, as well as continue economic development efforts around Muncie’s downtown.

“We are very excited to partner with the county and work towards a development in the heart of our vibrant downtown,” Muncie Mayor Dan Ridenour said. “The future development opportunities that can happen at this location are critical to a strong and thriving downtown.”

County officials also recognized the need to revitalize the property, working with city leadership on how to make that goal a reality.

“Before we began the process of replacing the Justice Center, which occupied the space downtown since it opened in 1992, we knew that the next use for the location would have to be something that compliments the downtown and brings people and commerce better suited than a jail,” Delaware County Commissioner James King said. “We wanted to do so in a manner that was beneficial to the downtown and the community. This new opportunity to work in cooperation with the city is the right direction to take this project.”

The jail, courts and offices in the former jail complex have remained empty after operations were transferred to the new Delaware County Justice and Rehabilitation Center, 3100 S. Tillotson Ave., in February of this year.

The Delaware County Commissioners passed control of the building to the ECI Regional Planning District in May of this year. Following the announcement on Wednesday, site control will belong to the Muncie Redevelopment Commission.

“Being able to potentially reuse that building for further development downtown is a big opportunity for the city,” Muncie Deputy Mayor Richard Ivy said.

Both city leadership and county officials have reaffirmed their commitments to the residents of Delaware County in making sure that the facility becomes a site for development, and not a blight on the downtown community.

“Closing this chapter on the Justice Center by providing the city of Muncie an opportunity to redevelop the site means the promise of a real impact on downtown,” Commissioner Shannon Henry said.

City officials aspire to work with a developer that would be able to generate a mix of commercial and residential space similar to other areas around downtown Muncie. In the near future, the city will move forward to open a request for proposals (RFP) for the site.

“We’re pleased to be able to work with Mayor Dan Ridenour and the city of Muncie on this,” Delaware County Commissioner Sherry Riggin said. “We truly think it will have a great outcome for downtown.”

Funding saved by the county commissioners that would have been used in the demolition of the jail will go towards future infrastructure partnerships between the city and county.

“Anytime the city and county can work together is a good thing,” Jeff Robinson, president of the Muncie City Council, said.  “Collaboration is key, and we should continue to build those relationships in a positive way.”

The City of Muncie has developers already working on downtown housing and retail with the White River Lofts, which is part of the city’s riverfront development. The high-end apartment complex along West Washington Street, which will be opening soon, will boast 55 luxury apartments and 2,000 square feet of commercial space.

The developer broke ground on that project at the end of May 2020, with additional phases being discussed for the downtown area.

Incorporated in 1865, the City of Muncie is a welcoming and ambitions community. The municipality has a population of approximately 70,085 residents, and is located in the heart of East-Central Indiana. Muncie prides itself as being a central hub for commerce, recreation, and development. Home to quality education, technology driven development, and a friendly populous. Muncie is proud to be “The Capital of East-Central Indiana”