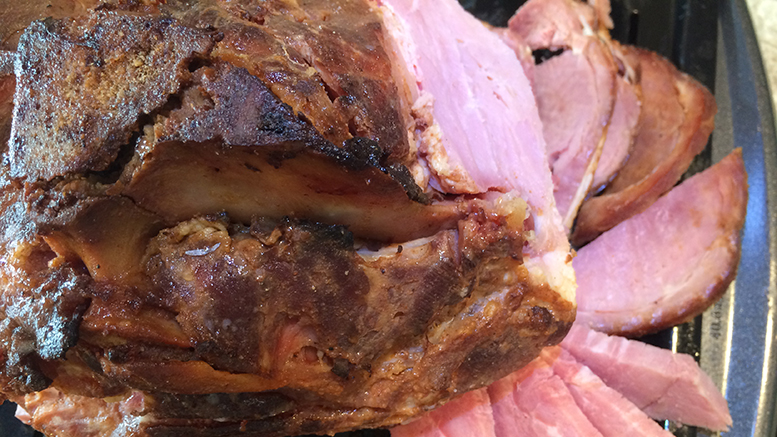 This may look like just a ham to you, but it’s actually a dream come true. Photo by Nancy Carlson

Yeah, OK, sure, I get it.  The 21st Century is a time of marvelous achievement, what with all the electronic advancements and stuff. But there’s an even more remarkable advancement, one in a totally different field of endeavor, that too often we take for granted.

Now, before continuing, I regret starting off any piece of writing with references to modern advancements, be they in the fields of personal communications or meat.

Anymore, “the latest exciting new advancements” age so quickly, they look ridiculously archaic in no time. It’s like when you’re watching an old “Seinfeld” rerun. Then Jerry casually takes a call, whipping out an ancient mobile phone the size of a steelworker’s lunch pail while the admiring people in the studio audience gasp “Ooooooh!!!” at his technological hipness.

Thirty years after it first aired, you see that and snicker, “I’m embarrassed for them!”

The fact is, though, thirty years from now, folks will watch television shows with us whipping out our iPhone 12s and laugh their heads off, amazed we didn’t just implant solar-powered smart phone chips in our foreheads at birth like they do.

But spiral-cut ham? With it, we are quite possibly living at the apex of ham’s glorious history.

The first time I ever laid eyes on one, I knew that baby was the only ham I wanted to eat for the rest of my life. Way back when I was a kid, my Dad sliced our hams into pink, thick, fatty servings that no amount of Mom’s raisin sauce could keep me from gagging over. But now? At first sight, those neat, trim ham slices stacked beautifully on hearty rye, liberally slathered with mayo and brown mustard, truly spoke to me. Unfortunately, my enthusiastic response wasn’t shared by my home’s primary ham purchaser.

See, Nancy had grown up on a prosperous Central Illinois hog farm. Not just her home, the farm was a thriving business other folks casually referred to as Briggs’s Pigses. From infancy she had seen her father, Lou Briggs, and later her younger brother, Bruce Briggs, earn comfortable livings raising hogs and shipping them off to market.

One thing she’d never seen on the farm, though, was a hog with a spiral-cut butt. Soon as I started talking up the beauty of spiral-cut hams, I got the impression my wife was a doubter. A God-fearing Lutheran woman, Nancy figured if The Big Guy Upstairs had wanted hogs spiral cut, they’d have come trotting down the gangplank of Noah’s Ark that way.

So when I insisted that from here on out, it was spiral-cuts or nothing, she responded accordingly.

And hey, at first I completely understood her feelings of doubt and suspicion. Earlier in life I had shared my own level of skepticism regarding a couple ham “advancements.”

Take shaved ham. A regular deli purchase at our house back in the day, it was ham cut so razor thin, my sister Patty and I could watch “Mighty Mouse” cartoons through a couple slices of it plastered over our glasses. I’m not sure why we’d want to, but what the heck. If my Mom brought home two pounds of shaved ham for our school lunches early in January, we wouldn’t choke down the last of it until the end of April.

And then there was salt-cured country ham. Now, I had nothing against salt, as anyone who’d watched in disgust as I crammed fistfuls of McDonald’s French fries into my face could attest.

But the first time I tried salt-cured country ham, it took a quart of cold beer to flush all that salt down my throat, and I was only in fifth grade. Being a Sunday School regular, if not an enthusiast, I felt the same way Lot’s wife must have felt in the Book of Genesis after fleeing the Old Testament’s version of Las Vegas, a.k.a. Sodom and Gomorrah. As the biblical story goes, turning around to sneak a peek at God’s fiery, hellacious notion of urban renewal, Mrs. Lot was instantly transformed into a crusty pillar of salt, her sodium content suddenly exceeding a tube of Dill Pickle Pringles. Still, she wasn’t a bit saltier than your standard country ham.

So, yeah, I’d known what it was like to have serious ham misgivings.

But that all changed last Christmas morning when Nancy pulled our holiday ham from the oven. For a minute I just stared, rubbing my eyes in wonderment, as if I’d walked into my living room and encountered Santa Claus with a big bag of delicious ham sandwiches slung over his shoulder.

It was a spiral-cut!

“God bless us every one!” I cried with childlike glee, while limping around our kitchen mimicking Tiny Tim.

Anyway, what followed was a week of spiral-cut glory. Oh sure, it tasted fine in the ham pot pie and the ham-and-beans Nancy made us. But it was in those thin, perfectly baked slices layered on the aforementioned rye bread with mayo and mustard that it truly came into its own.

I must have downed it for twelve meals in a row.

Now, of course, it exists only in my beautiful memories.

But if I can hold out a few more days, I’m pretty sure I know what kind of ham I’ll be dining on come Easter.