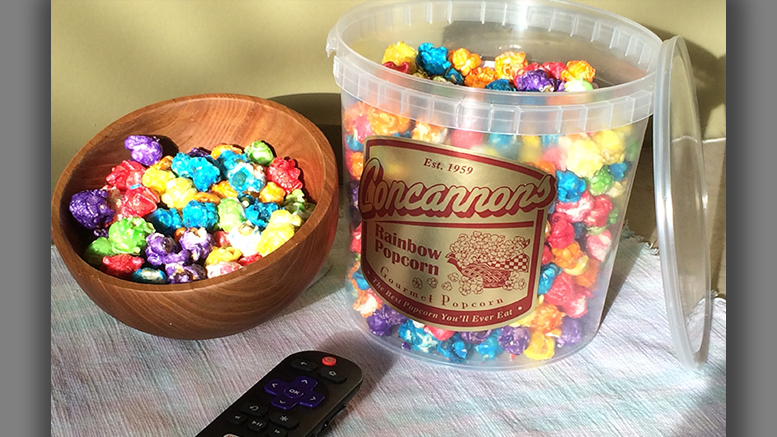 Handfuls of this stuff will light up your taste buds, as well as your eyes. Photo by Nancy Carlson

A while back I saw where some Hoosier lawmaker was proposing popcorn be named Indiana’s official snack.

All I could think was, seriously?

In desperate times like these, shouldn’t our Legislature undertake a more serious line of inquiry, such as deciding the state’s official double-cheeseburger, which happens to be served at the Workingman’s Friend tavern in Indy? So anyway, go ahead and call me provincial, but the whole popcorn thing is NOT OK with me …

… except under one condition.

That’s if this legislator is specifically referring to Concannon’s Bakery popcorn. The fantastic stuff  comes in Caramel, Chicago-Style Caramel and Cheese, and Rainbow featuring blue raspberry, lemon, orange, grape, green apple and strawberry flavors. Plus there’s Cheddar Cheese (White and Yellow), Caramel Chocolate, Gourmet Popcorn with Pretzels, Gourmet Popcorn with Pretzels and Peanuts, Hot Cinnamon and Caramel, Caramel Apple and, finally, Vanilla. All these popcorns come in sturdy reusable plastic buckets that will keep it fresh for weeks, though at our house, it rarely lasts more than an hour, maybe two, tops.

Know of anybody else’s popcorn worthy of the state snack title?

If lawmakers do take up this issue, we must recognize that choosing a state snack is serious business. See, other pressing societal problems notwithstanding, snack-wise these are blessed days. The bounty of assorted snacks behooves us to choose carefully, thereby avoiding a foolish decision such as picking Funyuns.

If you consider the total course of food history, snacks are new arrivals. Sure, local cavemen probably munched a squishy salamander or two for a quick pick-me-up between spearing woolly mammoths. As for back in pioneer days, though, it is doubtful early Hoosiers even had any snacks. This conclusion is based on nearly two minutes of intense research I undertook by typing “snacks that Indiana pioneers enjoyed” into Google.

Zilch, which somehow didn’t surprise me.

As for corroborating evidence, consider Laura Ingalls Wilder. Granted, she wasn’t a Hoosier. But in her “Little House On the Prairie” books, there’s no mention of her pestering her husband Almanzo about getting the crops in while he and his pals sit around drinking beer and munching Fritos. More to the point, there is also no evidence of him snapping, “Sheesh, woman! Would ya go eat some Twinkies or something?”

Further evidence? Archeological digs of early Indiana taverns haven’t revealed so much as a single empty Cheez Doodles bag dating to the pre-1800s.

What’s the only conclusion we can draw from this? Early Hoosiers didn’t have snacks, or if they did, they were way too embarrassed to name them, because they were probably candied mouse tails or something.

But if we are going to pick an official state snack, it must be done fairly. First a committee should be formed to determine just what snack categories we’re going to explore. Salty? Sweet? Frozen? Meaty? Because it wouldn’t be fair to lump all snacks together for judging under one common criteria, with questions such as: What goes better slathered with cheese and brown mustard? Saucy Sows Pickled Smoked Bologna Bites or Popsicles?

Then we need to set some other parameters.

Must an official state snack be made in Indiana? Because if so, that is going to limit our choices, big time. If not, after Concannon’s Bakery popcorn, I would definitely vote for Slim Jim meat sticks, wherever those wholesome fonts of protein come from.

But if a snack should have to meet residency requirements, I could also cast a vote for Wick’s Sugar Crème Pie. Sure, it’s already the state pie, but it could pull double-duty. This opinion is based on the hundreds of them I have surreptitiously inhaled over thirty-nine years of marriage, whenever my wife Nancy is visiting her sisters.

Of course, it would also be vital to research other states’ official snacks, so we didn’t pick some lame one. However, unless for a state snack Indiana chose “a nice glass of water,” there is no way we could pick a worse one than Utah’s, which is Jell-O.

What the heck do they pay their lawmakers for, huh?

In a related matter, it also turns out Kentucky’s bourbon balls are actually baked goods.