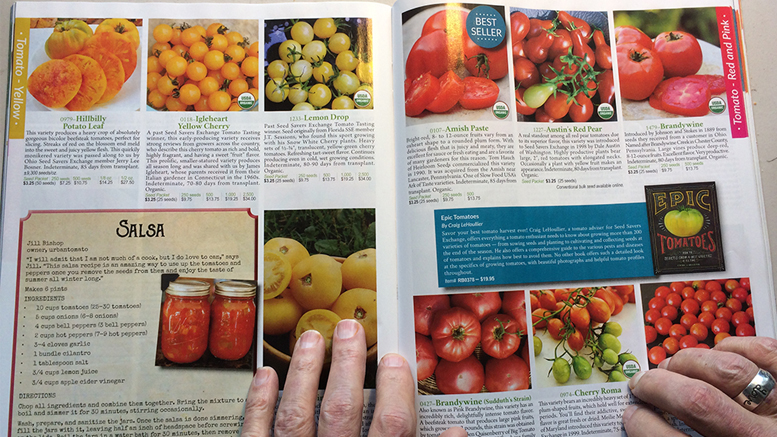 If this image brings tears to your eyes, you might be a gardening wacko. Photo by Nancy Carlson

You know you’re looking at an incredibly beautiful seed catalog when you get emotional over pictures of vegetables.

I mean, sure, I’ve bawled over food photos before.

But that’s been when confronted with, say, a particularly poignant pepperoni pizza picture. And sometimes I’ve choked up and shed a tear or two at the shot of a full basket of barbecued buffalo wings, photographed in the shadow of a frosty 32-ounce mug of luscious Mexican beer. Or most likely of all, it’s happened when I’m taken by surprise by the image of a towering triple-cheeseburger loaded with crispy bacon strips. The image is so stunning, its heavenly aromas are practically wafting off the page and straight up my nose.

Then the Seed Savers Exchange catalog showed up in the mail, and the Cherokee Trail of Tears green beans pictured nailed me right in the heart. Just behind them were even more beautiful green beans, such as the Kentucky Wonder Poles, the Rattlesnake Snaps, and the Painted Ponies. And, hey, I hadn’t even gotten to the Oxheart carrots and the Pink Plume celery yet, let alone the Japonica Striped Maze and the Hillbilly Potato Leaf tomatoes.

The catalog was a cornucopia of stunning vegetable shots.

Looking out my man-cave window, watching patches of snow slowly melting in my neighbor Brad’s yard, I suddenly flashed on a spiritual vision featuring the magnificence of God’s creations blooming in our garden’s orderly rows.

“Soon, John,” I promised myself, feeling my seed-planting hand getting itchy. “Soon … ”

Umm … not that I’m gonna plant that stuff myself, mind you.

I’ve never been a fan of getting all sweaty in the dirt. If my seed-planting hand gets itchy, it’s because I’ve got a rash. Besides, Nancy is the former farm kid and plant person in the house. Her ingrained agricultural spirit soars come spring, as the delicate shoots of green plants magically break the ground’s surface.

I’m the one whose spirit soars at the thought of 23-year-old Pappy Van Winkle bourbon sloshing around inside a whiskey barrel.

Nevertheless, in our personal quests for what brings us joy, there are financial considerations to take into account. For example, a bottle of 23-year-old Pappy’s can cost you over a thousand bucks, whereas a packet of 25 Minnesota Midget melon seeds will set you back $3.25.

At this time, I should note that the Seed Savers Exchange catalog also includes a bunch of flowers. What kind of flowers? Uh, you know. Pretty ones. Last year, Nancy’s flower garden was stunningly beautiful, though I couldn’t have named a single bloom.

But here’s what I soon discovered. While her flower garden was a feast for the eyes, even after taking it all in, my belly kept making those funny hungry noises. Therefore, I concluded my preference in plants is for the ones that are a feast for the stomach.

Truth be told, the Seed Savers Exchange catalog also included a load of growing advice for folks based on experts’ tips. The lady whose expertise is corn asserted growers should, “Start with … happy soil.”

Happy soil? OK, call me an idiot, but I didn’t even know dirt had feelings.

You don’t want to overdo it, though.

That was from the guy in charge of beans, who advised, “Don’t love your plants too much.” Tough love, that’s the ticket! You go mollycoddling your Calypso beans, which look remarkably like tiny little killer whales, and you’re gonna end up with a bunch of sissy guppy beans.

I know this guy speaks the truth. Last year, for the first time since we moved here, Nancy actually planted a cherry tomato plant. Then we began raising it by the usual tried-and-true Carlson gardening method, which is “leave it alone and see if it dies.” By the time fall rolled around, that sucker looked like something out of a cheesy old sci-fi movie called “The Thing That Ate Our Sidewalk.” Its tomato-laden tendrils spread and grew until they totally obscured our side porch. Walking through it, you had to tiptoe past the tomatoes to keep your shoes from resembling evidence in a homicide investigation.

Come that first frost, I didn’t care if I ever saw a cherry tomato again.

But that was then … and this is now, so maybe it’s time to branch out.

Oh yeah, plus cherry tomatoes called Blondkopfchens, which sound far easier to order by mail than for some plant-store kid who flunked high school German to sell you.

By the way, the catalog also includes some recipes.

That’s not to say its offerings will ever take the place in my heart of a pepperoni pizza, barbecued buffalo wings or a triple cheeseburger topped with bacon strips.

But come spring, I can see enjoying a nice bowl of Brazilian Garlic Collards on the side.