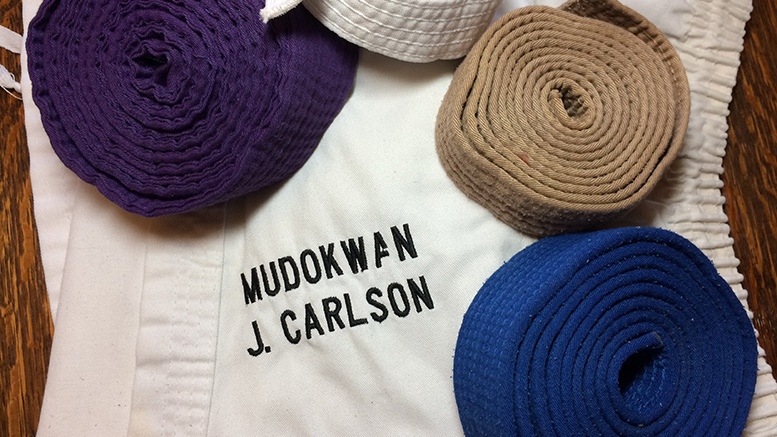 Because Nancy and I have highly refined tastes in televised entertainment, we tend to be drawn to more upscale programming that features the very best in art, science and drama.

OK, just kidding. “Cobra Kai” isn’t upscale. It’s more like way, way, way downscale, a Netflix karate show that’s a sequel to the movie “The Karate Kid.” Remember it? That was the one featuring Daniel-san as a high school punching bag, and his Japanese-American karate instructor, Mister Miyagi, as his mentor and protector. Plus there was a gang of smart-ass, teenage martial-artists-in-training, punks so vile, even Captain Kangaroo would have loved to kick their butts.

Given all this, I could claim to have no idea why I find “Cobra Kai” so appealing, but that would be a lie. It’s because I relate to it. In a bid to have my own hands licensed as deadly weapons, way back in my twenties I studied karate three times a week for about three years.

When it was over, I realized karate had taught me these irrefutable truths about the art of self-defense, their being:

Still, as a guy whose most athletic pursuit in high school was pushing around a broom as a “student janitor” saving money for flying lessons, studying karate was a physical challenge. We’d do push-ups and sit-ups and jumping jacks, plus insane stretching exercises with classmates yanking your lower extremities in opposite directions, as if your legs were a gigantic turkey wishbone. Even worse, we’d routinely jump over tall, stationary obstacles, rife with the potential of trading in your karate club membership for a spot in the Vienna Boys Choir.

But we also had tournaments in which you could win trophies.

For some, this was great. Take my son, Johnny. As a little boy he had suffered severe trophy trauma after shopping a neighborhood garage sale. Knowing trophies marked you as a winner, but not realizing you were supposed to earn them instead of buy them, he paid a quarter for one and proudly carried it home to show us. You can imagine his trauma upon learning he was now recognized as some cha-cha instructor’s “most improved dancer.”

But after enrolling in my old karate club a couple years later, he brought back a trophy from his first tournament that stood taller than he did.

As for my trophies, my greatest reward was always escaping with my life.

This particular tournament, my first, was held in Indianapolis, and was a big one drawing hundreds of competitors. Naturally, I was nervous until I met my opponent. Then I was relieved to see he was the same sort of pudgy little butterball I was, and like me, about as intimidating as the Pillsbury Doughboy. For a few seconds we circled, warily sizing up each other on the mat. Then I spotted a strategic opening and let fly a powerful roundhouse kick, which accidentally struck the poor guy right in the … well, you know.

With him clutching himself down there in the male body region known as Happy Valley while rolling around on the mat moaning, cussing and groaning, I felt worse about landing my low kick than he did.

But remember that scene in “The Karate Kid” when Daniel-san is badly hurt by an illegal kick, but heroically limps back into action anyway? That’s what my opponent did, except, having been nailed in the you-know-whats, he was now in an extraordinarily surly mood.

Let’s just say that three seconds back into our match, he was on me like white on rice. With his fists and feet flying, I was getting punched and kicked in body parts I didn’t know I had. In what seemed no time, I was scuttling across the mat like a terrified crab, looking for cover while this dude’s heels and knuckles bounced off my head, neck and shoulders.

Later, however, I was gratified to learn my opponent was, believe it or not, THE Chuck Norris.

Ummm … and if you believe that, some other time I will tell you about when I almost beat up Bruce Lee.

Anyway, besides those rare moments of intense embarrassment, “Cobra Kai” reminds me of the good times back in the karate club, too. The friendships forged with guys I would not have encountered elsewhere. The club camaraderie and that feeling of belonging. The thrill of advancing through new belt colors and breaking boards with your bare hands and feet.

So all things considered, am I grateful for those three years of karate lessons?

As we used to say back in the club, “Hiiii–yeahhhhhh!!!”