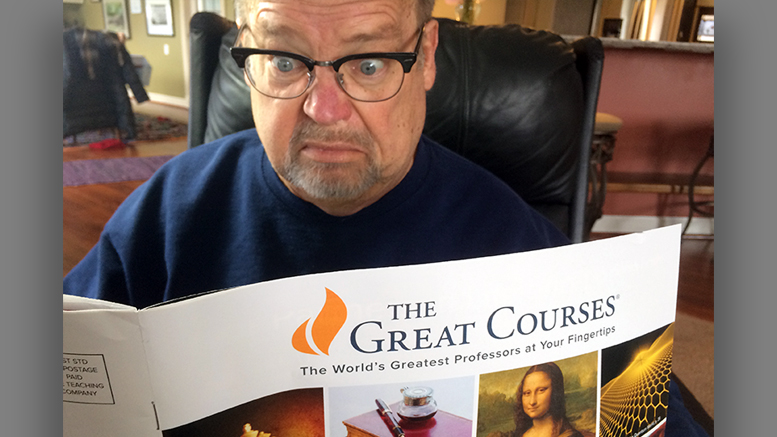 Set of television lectures offers lessons from the delicious to the stomach churning. Photo by Nancy Carlson.

These days, I think we’re all ready for some serious self-improvement.

That’s why, having received a catalog explaining our new TV’s option to watch a channel called “The Great Courses Plus,” Nancy and I checked it out.

Flicking through the available classes was an eye-opener. For example, there was one called “Baking Bread.” Was I interested? Nah, but at least I understood the concept, bread being what I’ve spent a lifetime spreading peanut butter on.

Other classes I understood included “Everyday Guide to Beer,” which sounded tasty. For more uppity folks, there was “The Instant Sommelier.” There were also musical classes such as “How to Play Guitar,” and “How to Sing,” which is what I call that croaking noise I make in the shower.

There was “Secrets of Mental Health.” All I could think about that was, “Where was this class fifty years ago when I was young enough for it to help?” Ditto for “Real Zen And Real Life,” as well as “Death, Dying and the Afterlife,” the subject of which becomes more important to me with every day I age.

Then there was “Unsung Heroes of World War II.” If I were president, that class with its real-life lessons about self-sacrifice and bravery would be required watching for every American who didn’t want me to whack him or her across the knuckles with a ruler.

But some of the classes were completely unsuitable for me. There was “Discover the Secrets of Good Nutrition,” which could only have had an adverse effect on my stash of Little Debbie snack cakes. And there was “Why Do We Behave The Way We Do,” which I’d personally be afraid to find out.

Most of the classes for which I judged myself unsuitable, however, fell into what you might call the “brainy” category.

Take the class on “Mathematical Problem Solving.” How much would I enjoy that one?  I’d rather be dead. And then there was “The Joy of Trigonometry.” Frankly, I’d rather sign up for a class named the “The Joy of Trichinosis,” parasitic intestinal diseases sounding more fun to me.

Then there was stuff like “Radio Astronomy,” plus anything credited to the late, great physicist Stephen Hawking, such as his work, “The Theory of Everything.” And there was “Exploring the Milky Way.” Intellectually, I figured this would leave me in its cosmic dust, unless it turned out to be about the candy bar.

Anyway, some classes sounded fine and some not so fine. Still, I kept looking for that one special class to take my mind off the COVID-19 pandemic, and finally found it.

It was “The Black Death,” taught by Purdue University’s Dorsey Armstrong, PhD.

Now, if you are a rational person, you might ask, “Ace, how is watching a show about the bubonic plague gonna take your mind off the COVID-19 pandemic?” Fair question. The answer is, it’s not. What it IS doing is showing me things could be a helluva lot worse.

Professor Armstrong is an entertaining teacher, though I wonder if she might not make better use of her talents marketing her course as “The Dorsey Armstrong Black Death Diet.” All she’d need is to have her students set a yummy meal on a TV tray placed before their television. Then, just as that first forkful reached their mouths, she’d start lecturing about how the plague was transmitted by regurgitating fleas abandoning the dead rats they’d been gorging on, switching instead to eating people for supper.

The professor delivers such nasty details with the hint of a smile. But if you can still eat a steaming plate of tomatoey tortellini topped with pungent, mold-spotted, blue-cheese crumbles after listening to her, you’re a lot hungrier than I am.

By the way, the 14th Century’s Black Death is estimated to have killed half the population of Europe. And while the rat/flea connection seems a good bet on what started it, the professor said it might have been gerbils. Yeah, gerbils. Another school of thought is the plague came to Earth from outer space. Believe it or not, some respected astronomers think that’s possible, and I don’t mean the kind of respected astronomers working for the National Enquirer.

As for more juicy tidbits, Armstrong said depending on which variation of plague a person contracted, cause of death could be drowning in their own blood or, yuckier yet, their internal organs liquefying. She also noted how, in a bid to capture a walled Black Sea city in the 1340s, the invaders attacked by catapulting thousands of plague victims’ corpses over the walls.

Obviously, there was nothing funny about The Black Death.

Well … except for Armstrong’s contention they buried the victims in layers, just like making a lasagna, plus the name of the putrid, puss-filled growths that sprouted in a victim’s groin and armpits.

They were called “buboes,” pronounced with a long U, like “boo.” For a symptom of history’s deadliest plague, it’s a hard word to take too seriously. Just imagine the resultant exchanges between a physician and patient back then.

On a hunch, my personal researcher, Nancy, tracked down the fact that buboes, which led to the word bubonic, is the root of what eventually became known to us as “boo-boos.”

So next time you stumble and suffer a boo-boo, look at the bright side. At least it’s not The Black Death.