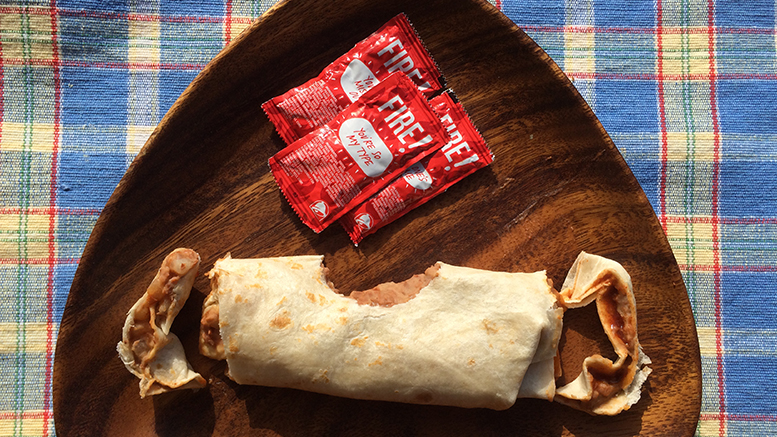 Eating a burrito from the middle with the ends detached is the safest way. Photo by Nancy Carlson.

I never anticipated it, but in my latter years, I have become something of an expert on the Heimlich Maneuver.

I’ve been on the receiving end twice, maybe three times, which seems pretty funny. You’d think a guy would remember exactly how many times he has faced the possibility of choking to death. Contributing to my confusion, however, is the fact that each time, my circumstances have remained remarkably the same, so they tend to run together. Specifically, I’ve been home, seated at the small kitchen bar where my wife and I take most of our meals, and eating dinner.

My rescuer each time has been Nancy.

Here’s one thing I have found unique – maybe even a little bit amazing – about choking like that. Say you’re in a restaurant. Before it happens, you may be in the absolute pink of health. Seconds later, when it’s happening, it’s not too far-fetched to say you’re sort of staring death in the face. Seconds after that, when by the grace of your rescuer and Dr. Heimlich your breathing has been restored, things are right back to normal, with little hint of the trauma you underwent.

Well, there’s little hint of the trauma you underwent if you don’t count that chunk of un-chewed sirloin, the one that flew out your mouth and through the air before landing three tables away in some poor lady’s dinner salad.

Now, I probably have well-meaning, compassionate readers out there who at this very moment are worried sick about me, thinking, “Hey, dingbat, here’s an idea! Why not try chewing your food before swallowing it?”

And that’d be a fine solution, but here’s my problem.

On what I like to think of as my list of “The Cavalcade of Stuff That’s Screwed Up About Me,” one is the result of three spinal surgeries I had in Indy a few years ago over a period of eighteen months. While it sounds counterintuitive, during the second one my surgeon went through the front of my neck to get to the back of it. And it worked! I woke up, could wiggle my extremities, pee on my own, and everything! But ever since then, my throat’s been what neck therapists might describe as “freakin’ wonky.”

The first time it happened, we were eating carry-out burritos that, when folded, were capped by what seemed like six layers of gummy flour tortilla on either end. Now, for the record, these days I eat my burritos from the middle out, discarding the ends and, therefore, pretty much negating any embarrassing recurrence of that particular choking incident.

I mean, if you choke on the mushy, middle, pliable part of a bean burrito, it’s probably time to start sucking down oatmeal.

But getting back to that dark day, there I was happily eating my burrito when a big bite of the end blocked my windpipe like an over-tightened screw-top on some blathering wino’s bottle of Mad Dog 20/20.

One thing this experience taught me, though, is the importance of having a prearranged signal that can alert your partner to the fact you are in deep trouble.

Nancy and I had none.

Nevertheless, another thing this experience does is quickly motivate you to formulate one. Within a couple seconds, I incorporated slapping the kitchen bar, swiping what was left of my burrito from the kitchen bar, bouncing off the edge of the kitchen bar, then desperately pointing at my throat while clinging to the kitchen bar, to send Nancy an unmistakable message, that being, “AAAACK!!!”

Fortunately for me, she knew from the get-go what do do. Two quick yanks on my midriff from behind my back and that huge hunk of pasty flour tortilla popped from my throat, bouncing harmlessly off the back of my teeth. As for my second bean burrito, I pitched it, having had my fill of burritos for the day.

You might notice one thing I DIDN’T do to alert Nancy during this unfortunate episode was actually say anything.

If you’ve got a partial blockage, meaning you can still get a little air, I believe you can make certain embarrassing, animalistic noises that may alert others to your predicament.

But if you’ve got a complete blockage like my first time? Forget it. You can’t say a thing.

Anyway, take my advice folks. Always chew every bite forty times, or however many times the experts recommend. You don’t want to choke to death on a burrito, or anything else for that matter, even if doing so would put you in the company of some pretty exceptional people.

There’s that bad-boy Attila the Hun, who choked to death on a really bad nose bleed.

Furthermore, the ancient Greek playwright Sophocles is said to have choked to death on a grape seed in a cup of wine, leading one to presume he either had a very skinny neck or grape seeds were a whole lot bigger back then.

And in what seems to be an emerging pattern involving legendary playwrights, the late, great Tennessee Williams is said to have somehow choked to death on a bottle cap from a container of nasal spray.

Not even a writer of his caliber could have put that in a play and made it sound plausible.