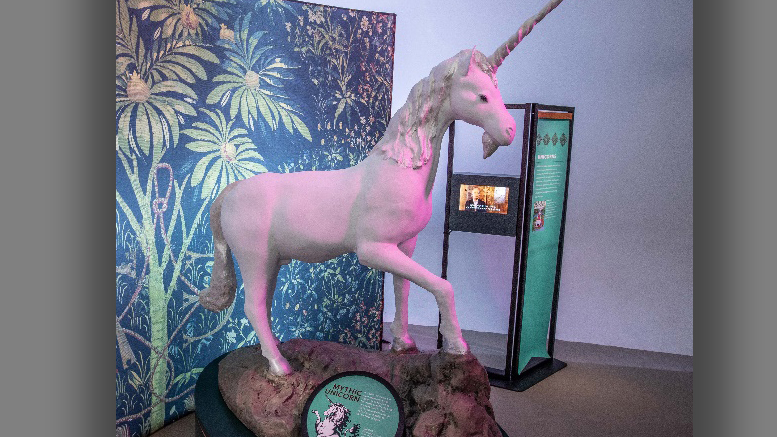 Muncie, IN— Stories of mythical beings have been with us for thousands of years. These legends, which were sometimes inspired by fossils or living animals, continue to inspire us today. Opening at Minnetrista on January 23, Giants, Dragons & Unicorns: The World of Mythic Creatures traces the natural and cultural roots of some of the world’s most enduring mythic creatures.

Organized by the American Museum of Natural History in New York, Giants, Dragons & Unicorns: The World of Mythic Creatures features unique cultural objects to highlight the surprising similarities and differences in the ways people around the world envision and depict mythic creatures. The exhibition includes models and cast fossils of prehistoric animals to investigate how they could have – through misidentification, speculation, fear, or imagination – inspired the development of several legendary creatures. For example, visitors will discover how narwhal tusks were believed to be magical remnants of unicorn horns, how dinosaur fossils may have been mistaken for the remains of griffins, and how tales of sea monsters may simply have been fisherman’s tales of real creatures such as the oarfish and giant squid.

Exhibition highlights include a stunning vibrant sculpture of the African water spirit Mami Wata; a replica “Feejee mermaid,” of the type made famous by showman P. T. Barnum, created by sewing the head and torso of a monkey to the tail of a fish; a “life-size” model of a European unicorn; and a dramatic model of a kraken, whose tentacles appear to rise out of the floor as if surfacing from the sea.

Giants, Dragons & Unicorns: The World of Mythic Creatures also offers numerous interactive stations throughout the exhibition. Visitors are invited to participate in activities like rearranging scale models of mammoth bones to look like a giant human skeleton. In an engaging digital interactive, visitors can build their own dragon and watch as it comes alive in a virtual environment. The exhibition also includes several video interviews with experts in various fields discussing the significance of mythical creatures and their possible real-life counterparts.

Giants, Dragons, & Unicorns: The World of Mythic Creatures is on view at Minnetrista from January 23–May 9, don’t miss it!

Giants, Dragons & Unicorns: The World of Mythic Creatures is organized by the American Museum of Natural History, New York (amnh.org).

Minnetrista is your year-round gathering place! Born out of the Ball family legacy, the home of the Ball jar, Minnetrista connects people, encourages engagement, and improves our community. There is always something new to discover at Minnetrista. From beautiful gardens, unique events, interactive exhibits, and engaging workshops, every adventure is unique and fun. For more information about Minnetrista, visit www.minnetrista.net.