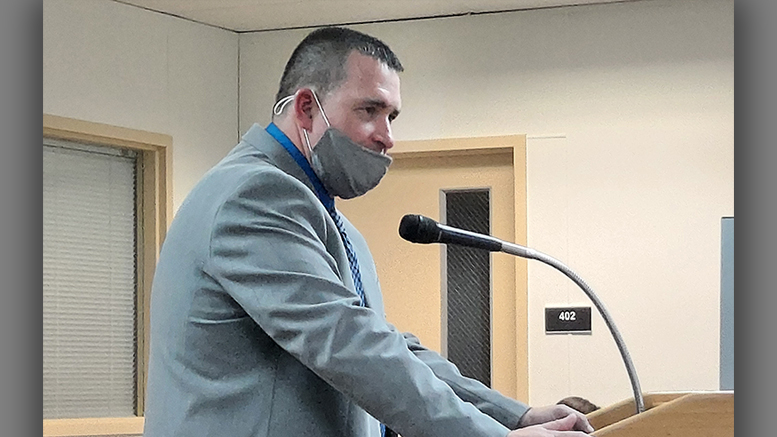 Ray Dudley speaks at the MCS board meeting on December 8th. Photo by Andy Klotz

Muncie, IN—The Muncie Community Schools (MCS) Board of Trustees has named former Delaware County Sheriff Ray Dudley its new chief of security. He will replace longtime Security Chief Chuck Hensley who is retiring at the end of the month.

Dudley served as sheriff from 2015 to 2018 where he managed operations for the 220-inmate jail and law enforcement operations throughout Delaware County. He was responsible for the department’s $10 million budget and security for five Circuit courts, juvenile court and family support court.

Prior to his stint as sheriff, Dudley spent 18 years as deputy sheriff and received certification in accident investigation, criminal investigation, community-oriented policing, implicit bias and other specialties. Among his many commendations are the NAACP Community Service Award, the Muncie Black Expo Community Leadership Award and the Crimes Against Children Coalition Indiana Leadership Award for combatting human trafficking and exploitation of children.

“As a Muncie native and a longtime public servant, Ray knows the community and our schools,” MCS School Board President James Williams said. “His leadership experience and well established reputation of working with kids make him an ideal fit for this position.”

“It’s exciting to bring in an experienced leader as we look to enhance our security procedures and build more bridges between our security team and our students,” MCS Director of Public Education and CEO Lee Ann Kwiatkowski said. “Ray’s list of certifications is impressive, and he is already familiar with our School Resource Officer (SRO) program, so we expect a smooth transition as he takes the reins from Chuck.”

Dudley has worked in full-time and part-time roles for MCS security throughout his law enforcement career, including a stint as SRO at East Washington Academy during the 2019-20 school year. He looks forward to setting a welcoming tone for all the students.

Dudley is a Southside High School graduate with a degree in Criminal Justice from Anderson University. His first day on the job is December 9, 2020.

Serving the local community for more than 100 years, Muncie Community Schools educates more than 5,000 students at six elementary schools, two middle schools and one high school while also managing several other educational facilities. Through its unique partnership with Ball State University, MCS strives to maximize each student’s potential so upon graduation he or she can be a positive, productive member of society. Find out more at muncie.k12.in.us.