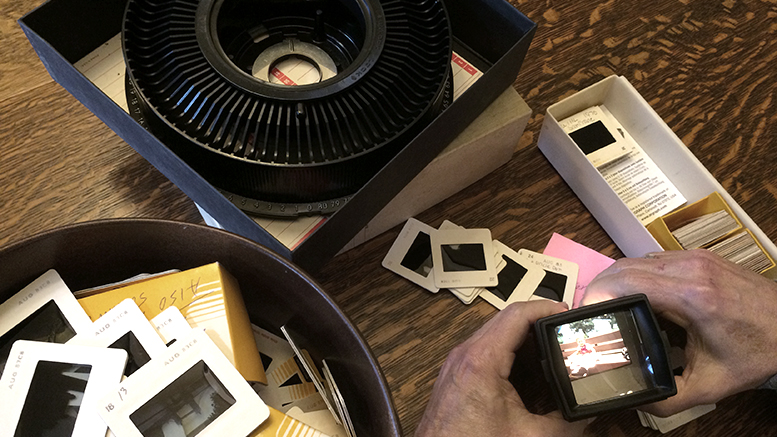 To keep or not to keep? That is the question when pondering boxes of slides. Photo by Nancy Carlson

Some people have infestations of cockroaches, stink bugs or termites.

We have an infestation of slides.

You know the kind … those stiff flat picture slides your father shot incessantly when you were a kid, as if he were a paparazzi and you were the subject of his latest photo essay, “Our Boy Blubberpuss.”

Can’t say I ever cared for them.

I spent way too many Sunday nights fidgeting in our darkened Baptist church, watching slide shows prepared by missionaries to faraway places. They always featured formerly barefooted kids who’d been bouncing around in loincloths, now thumbs-upping the missionaries in their new madras bermudas, white socks and sneakers.

The remaining slides would be boring ones of huts, palm trees and maybe the occasional monkey, though they did serve the purpose of renewing the viewer’s religious fervor. Before long I’d be like, “Lord, just get me outa here in time for ‘Ed Sullivan’ and ‘The Smothers Brothers’ and I will never sin again …”

But that was then. Now Nancy is working to rid our attic of excessive slides, no mean feat considering the thousands that are up there.

But seriously, one thing Nancy’s campaign has taught me is that going through old slides requires a spouse to display a measure of maturity, kindness and dignity. This is particularly true if you both participated in “practice” marriages before hooking up for your “real” marriage.

Watching slides of a youthful Nancy making goo-goo eyes at some dude over pieces of their wedding cake sparked my mature, kind and dignified curiosity.

“Who’s the dork?” I demanded, despite already knowing the answer.

This worked both ways, though.

“Look, honey-bunch!” I’d exclaim, examining a favorite slide. “It’s from our love-fest down in Gnaw Bone!”

“I’ve never been to Gnaw Bone, you nitwit.”

Anyway, not long ago we were sifting through slides with my sister Patty.  Some of the slides were from my family, and some were from Nancy’s. It wasn’t hard to tell which were which. If you found yourself looking for Lawrence Welk and His Champagne Music Makers to come stumbling out of an Illinois cornfield, they were Nancy’s slides. That’s because she and her talented female siblings, the Briggs Sisters, were dead ringers for the Lennon Sisters.

I know. I’ve seen the slides. 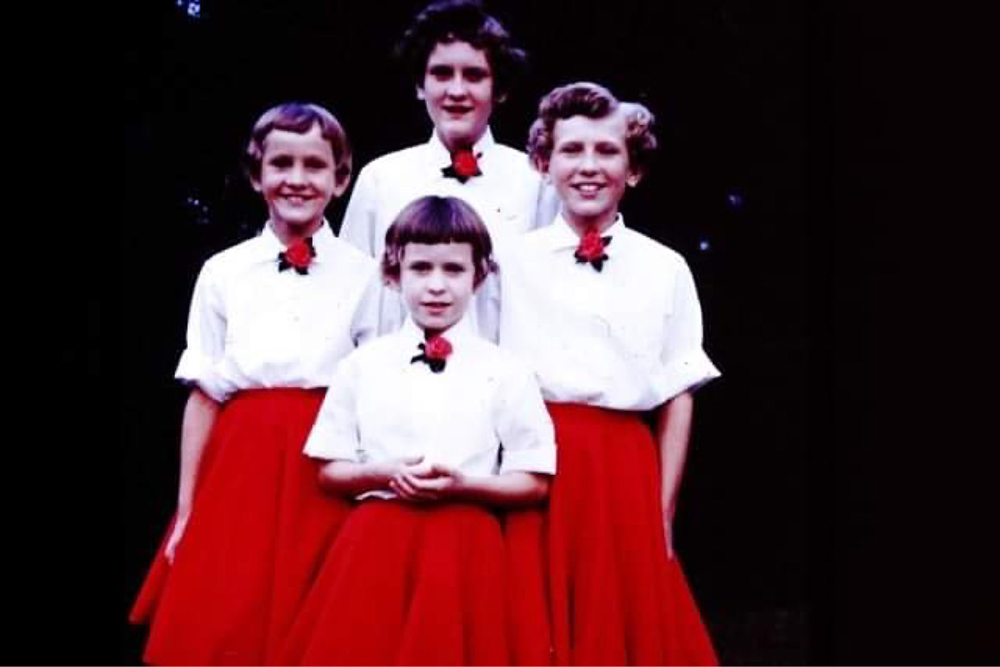 Slides prove the Briggs Sisters were the hottest act since the Lennon Sisters. Photo by Louis Briggs

Not only did Bev, Margi, Marti and Nancy look like the Lennon Sisters, they sang like the Lennon Sisters. Perfectly normal on the outside, they’d be pictured innocently sitting around the dining room table munching supper when some musical spell would come over them. Then in a flash they’d pitch their pork chops and break into a bouncy rendition of “Mr. Sandman,” their mouths forming the words with perfect Briggs Sisters sincerity.

Way too many for my liking featured some weird fat kid. Worse, most of them were taken with me in a bathing suit, vacationing with my family up at Black Lake in Michigan. As I bounced down the hill to the lake after my third ice cream sandwich of the morning, the slides always caught the “muffin top” above my swim trunk’s waistline shaking like Caucasian-colored Jell-O.

It was as if Kodak’s slide people had perfected “jiggle vision.”

Poring over these and other slides from my misspent youth recently, I wished they’d stayed packed away in the attic. But then we came upon some slides of old people – Herb and Hulda Carlson, Howdy and Millie Smith – which brought me up short.

How many kids these days really get to know their grandparents? I grew up blessed to live within a half-hour of mine, and that was traveling on foot.

It just made sense their slides were with the others, but the images popping onto the screen took me by surprise. Why that was so, suddenly struck me: I hadn’t seen their faces, in real life or in pictures, for decades.

With a rush, those slides spurred memories. Food was a centerpiece in many of them. The grand-folks at Sunday dinners. Attending our birthday parties. The holidays gathered around tables groaning under the weight of great cooking, be it the Smiths’ down-home country dishes or the Carlsons’ Swedish fare.

But those slides brought much more to mind.

There was falling asleep to nighttime tales of dogs baying in the woods on lantern-lit coon hunts. My  grandfathers working together – one on the motor, one on the chassis – of what turned out to be the slowest, but also the coolest, go-kart ever. The grandmother intricately stitching quilts by the hour for Patty and me on a frame in her basement. The typewriter a grandfather spent a hundred bucks buying me for graduation, way before I knew writing would become my work.

The slides brought poignant thoughts, too, illustrating the cumulative effect of my grandparents’ advancing years, along with the realization that Patty, Nancy and I were now nearing those same ages ourselves.

Eventually came the final good-byes to people who had literally loved us with their every breath, our own love and gratitude conveyed with a hug and grasped hands when you couldn’t force the right words past the lump in your throat.

Among those slides there was all that, and a realization.

Yeah, these were keepers.