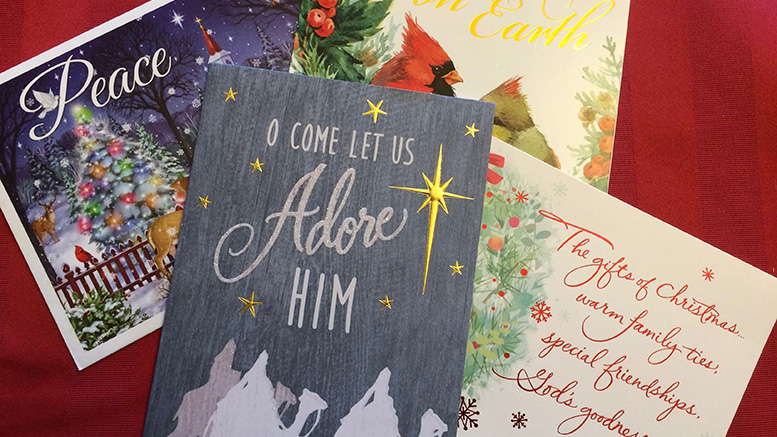 Christmas cards speak to our holiday wishes and the reason for the season. Photo by Nancy Carlson

It’s the realization that only six days remain before this disaster called 2020 is finis, behind us, flushed down history’s toilet …

COVID-19 has been the main culprit in all this woe, of course, and we aren’t through with it yet. While never a coronavirus doubter, at times I’ve been more lax about following appropriate safety measures than my wife Nancy wished I were. By now, if you remain unconvinced of its seriousness, it beats me what anybody can say to you. At some point, surely, the figures must get your attention.

More convincing, though, is to encounter someone like my buddy Mark, a funny and high-spirited guy who helped land me this column-writing gig five years ago. Our primary mode of interaction had long been “bull-sh***ing” each other, often in fleeting hallway encounters, and sometimes in the company of our wives over great steaks and top-shelf gin.

Either way, we never tired of it.

Then he became badly infected with the coronavirus. For a time, that cut-up of a guy believed it was killing him.

One quick phone call early in his recovery, listening to his labored breathing and the cringe in his voice as he talked about what he’d been through, was all the convincing I needed.

Thank goodness, with the development of new vaccines – a second gift for us from overworked medical researchers – a happy ending seems in sight.

But there’s so much more to deal with. Once our country was a beacon of hope for the rest of the world. Now? Not so much. It’s more riven with animosity, political conflict and outright hatred than any time since our Civil War. Mix in the unemployment, the racial strife, the hunger and people being forced from their homes, and it can seem too much.

So today is Christmas, a time of “Peace on earth, good will toward men.”

With 2020’s end and the arrival of vaccines, will it be our third gift?

Speaking of gifts, here’s what amounts to my most memorable Christmas story.

Once upon a time there was a polite, quiet fifth-grader named Eddy who had recently moved into a new elementary school just west of Cleveland. On the day he and his classmates returned from Christmas vacation, their kindly teacher asked each about his or her favorite gift. Answering desk by desk, all noted their special presents, from radios and clothes to sports equipment, models and jewelry.

Then came Eddy’s turn, and silence.

“What was your favorite gift, Eddy?” the grandmotherly teacher gently prodded him.

“I didn’t get anything,” he answered quietly, as the other kids turned to stare.

“Nothing?” the teacher asked.

“Not a shirt?” the teacher continued, a little testily. “Not a pair of pants?”

The boy shook his head.

“Well, you must have gotten something!” the teacher almost snapped, in a tone her students had never heard her use before. “Didn’t you at least get some new underwear?”

With that, Eddy gave up and nodded. Sure. He’d gotten some new underwear.

Relieved to finally be assured that none of her students had been forgotten, the kindly teacher smiled, gratefully embracing Eddy’s lie.

While that’s my most memorable Christmas story, it’s not my favorite one. For the short time I knew him, Eddy and I were friends. Then one day he was gone from our school, never to return.

Apart from the fact that Eddy’s painful experience somehow shamed me for not sharing in it, I don‘t know why I keep thinking about him. This Christmas, though, it may be because America seems bound to produce a lot more Eddys. Are societal safety nets fully in place to protect normally hard-working people and their children from the threats that remain poised to crush them?

I don’t know, but after such a grueling year, it seems doubtful …

What I do know is that so many things are way out of whack. The snaking lines of cars whose drivers, much to their own astonishment, find themselves and their families in need of food assistance. Military veterans, men and women we should view and care for as heroes, who increasingly think their only escape from aching depression is taking their own lives. Billionaire business owners winding up with pandemic relief funds, while small shops that mom-and-pop proprietors put their hearts and souls into go under. Well-known wealthy “evangelists” who ostensibly answer to a higher calling, criss-crossing the country in corporate jets, hitting up poor souls clinging to the promise of a glorious hereafter in exchange for money they can’t afford to give.

If all that’s not enough to trouble you, it should be.

But then today comes the unforgettable tale of a star, a weary young couple with nowhere to stay and a baby in a lowly manger, the favorite Christmas story for many.

Beautiful as it is, it can be heard several ways. It may be a bedrock principle in your closely-held faith, one that stirs your very soul. It may simply be a poignant story to you. It may mean nothing to you at all. But especially these days, the tale of Jesus’ humble birth and miraculous life should strike us as the rarest of gifts.

It’s about faith’s triumph over injustice. The triumph of meekness over brutality. And in the end, love’s triumph over hate, all from a Prince of Peace who nevertheless drove the money changers from the temple, and always embraced the poor, the hurt, the underdog.

Today that story seems like a ray of hope, one sorely needed by millions of people.

I’m pretty sure Eddy would have agreed.