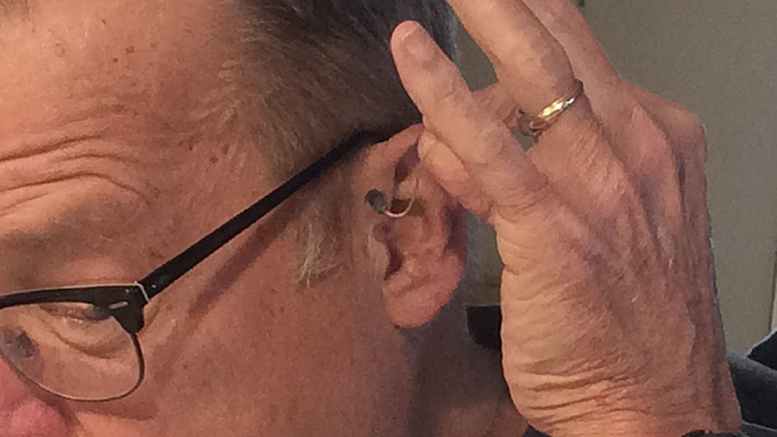 Insert a couple of these in your ears and there’s no end to the stuff you’ll hear. Photo by Nancy Carlson

Being fitted with hearing aids a few weeks ago has introduced me to a whole new world of aural perception.

For example, who knew flushing a toilet could sound like you were going over Niagara Falls in a barrel? And ripping open a bag of fresh pork rinds? Godzilla made less of a racket stomping through the heart of Tokyo’s Noodle District.

This convinces me I needed hearing aids all along.

For years Nancy claimed the same, but I doubted her. Instead, I maintained if she’d simply undergo intense therapy to correct her wide-ranging speech impediments, I’d be able to understand exactly what she said without making her repeat everything six times. But one morning, on the pretext of buying me a McDonald’s breakfast sandwich, she drove me past Ball State University’s Audiology Department and booted me from the car.

I took the opportunity to take the test.

Turned out I flunked.

What else did I learn from this? First, it was a timely reminder of what should be ingrained in every married man’s brain for his entire life. When your wife says something is your fault, of course it is. Just apologize and shut up.

But it was also a reminder that electronic gadgets keep improving all the time.

They get smaller, for one thing. You can’t even see my hearing aids, at least not without poking around inside my ears.

They also keep getting smarter. This truth struck me years ago with the realization my smart phone had a dumb owner. Now it turns out my hearing aids are also smarter than I am. Thanks to exciting modern advancements, they work through my smart phone in a coordinated, innovative process that was thoroughly explained to me by Dr. Greg, my hearing-aid guy.

What does this new technology involve?

OK, that’s a cop-out.  Information on any level of technology more advanced than a mousetrap tends to rush into my right ear and shoot out my left, all without stirring a single brain wave in my cerebral, you know, thingamajig.

But it’s pretty impressive. So, for that matter, is Greg. While discussing the years of cranked up rock ‘n’ roll that shredded my eardrums, I mentioned the rock band Motörhead. Greg then praised its late, lamented, lead singer Lemmy. This led me to play an air guitar tribute to Lemmy right there in Greg’s clinic. It continued until I noticed the looks of disgust on his student assistants’ faces. These were looks only young women watching a man as old as their grandpa playing a hip-shaking Motörhead air guitar solo could possibly convey.

While on the topic of hearing aids and music, I should also address Nancy’s whistling. If you’ve ever worked alongside my wife, you know she’s an enthusiastic, joyful whistler, and I wouldn’t have it any other way. That said, since getting my hearing aids, being in the same room where she’s whistling is like having my head caught in a calliope.

Conversely, my voice sounds better than ever. It’s as if, when heard through my hearing aids, my speech takes on the professional-broadcast quality of NBC’s Lester Holt. That’s amazing, considering I grew up sounding like Elmer Fudd.

My hearing aids came with an 87-page user guide, too. Having flipped through this user guide a total of once, it is hard for me to imagine how bored I’d have to be to flip through it twice. Either that, or how serious a hearing-aid malfunction I’d have to be facing.

Maybe if my hearing aids started sprouting colonies of zebra mussels or something.

One cool thing that came with my hearing aids, though, is the little black brush.

“Why a little black brush?” you ask.

It’s because in buying hearing aids, it’s understood you have just enlisted in mankind’s never-ending war against earwax.

Now I must confess something. Earlier in my life, I hadn’t given all that much thought to earwax. Sure, I despised it, and if I spotted some I got rid of it. But I didn’t lie awake fuming in bed at night, regretting all of those wasted years my earwax represented.

The brush measures about two inches in length and is for cleaning earwax that gets on the hearing aid “domes,” through which sounds come out. But far more intriguing is the wiry metal extension poking a fifth-of-an-inch out the other end of the brush. Shaped like a paper clip, it’s for flicking out the tiny earwax chunks that plug up the little hearing hole in the dome’s center.

It looked like a game when Dr. Greg demonstrated it. You know, kind of like a watermelon seed-spitting contest, except you flicked instead of spat, because it was earwax instead of seeds, and the little chunks of earwax didn’t fly nearly as far.

Now that I’ve got hearing aids I’ve never been happier, and Nancy, too, from what I hear.