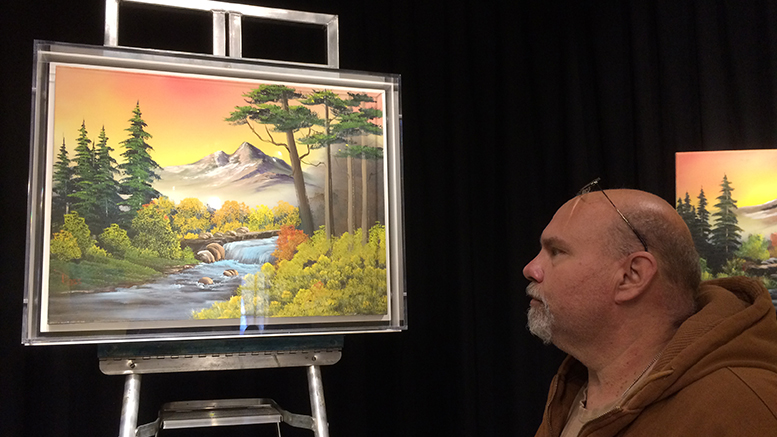 It seems an unlikely room to have spawned a cultural icon.

Partially bordered by heavy curtains, inside there are a couple old television cameras, big hulking ones bearing headsets and lengths of looped electrical cables. There is what can best be described as an industrial-sized easel, a tall ungainly looking thing, steadied below by a large brick. And there are some stacked paintings rendered in a style as comfortingly familiar as fresh apple pie.

Oh, and one more thing.

“Listen to the voice,” said one visitor, who happened to be my sister, Patty Wilson.

The voice she was referring to was unmistakably that of Bob Ross. This place, where he felt particularly welcomed, was the small studio in which the beloved artist and teacher filmed his television show, “The Joy of Painting,” between 1983 and 1988.

Located in what used to be WIPB-TV’s headquarters in the Lucius L. Ball house, it is now the site of the “Bob Ross Experience” exhibit, a part of the Minnetrista campus, which celebrates the artist whose fans eventually numbered in the millions.

Why was he so popular? Probably because he made learning to paint a fun, fulfilling, creative outlet that many people needed in their lives, whether they realized it at first or not.

A half-hour spent watching Ross paint his “happy little trees” was likely worth an hour on any shrink’s couch, so soothing was his show and his manner. During a recent visit to the exhibit with Patty and my wife Nancy, simply overhearing his taped mention of that familiar color “Van Dyke brown” sparked a moment of joy and an involuntary grin.

Along with the cameras, easel and paintings, there was a rack of plain-looking shirts visitors were free to try on.

“He only wore John Henry shirts from JCPenney,” explained Audree Speicher, a friendly “experience guide” at the exhibit. By the look of them, they were as low-key and unpretentious as the artist who painted in them.

In preparing the exhibit and its associated activities, $1.2 million was spent, money sure to highlight the painter’s fruitful connection with Muncie. It’s an association of which our city should be intensely proud. After vacating the Lucius L. Ball building, “The Joy of Painting” continued to be recorded in Ball State University’s Edmund F. Ball Building through 1994, when Ross’s health issues forced its cancellation. He died of lymphoma on July 4, 1995, at age 52.

Still, he remains a presence in reruns and fond memories.

Just across a hall from his original studio, a typical living room from the show’s early days highlights Ross’s considerable fame.

Question: What honor marks a person as a true American icon? An Emmy award? A Grammy? An Oscar? Your picture gracing slick magazine covers, or perhaps your name on a star along Hollywood’s illustrious Walk of Fame?

Your image on a PEZ candy dispenser. For Ross, that had to be as cool as having four paintings in the Smithsonian.

One of his PEZ dispensers, featuring his poofy plastic hair and all, is behind glass in the living room exhibit. Nearby rests another unique mark of his celebrity status – the Bob Ross Chia Pet. Then there’s a Bob Ross hair pick, and a pair of Bob Ross skis.

But for the sake of uniqueness, none of these objects beats what may be the creme de la crème of kitsch. It’s the two-slice electric toaster that leaves Ross’s image singed onto the surface of your toast, complete with a remarkably accurate portrayal of his permed hair.

Speaking of which, if those items are irrefutable evidence of the native Floridian and retired Air Force master sergeant’s ascendency to fame, there’s also a hint that being Bob Ross could have its drawbacks. A small poster notes he had originally permed his hair while a poor painting instructor, just to save money on haircuts. Growing tired of his expansive locks after success came knocking, he wanted to cut them but was told to forget it

By then, the poofy hair was part of his brand, his logo.

That doesn’t seem too high a price to pay for the adoration his work won him from his numberless fans, though.

Andy Klise, a devoted painter in Ross’s style, was at the exhibit this day, and loving it.

“It’s perfect for me, because I don’t really like to stay in the lines,” the Pendleton man explained of Ross’s techniques, taking a break from viewing the displays. “Just the freedom to paint is what you want, and to change what you want.”

My sister, who is not a painter in Ross’s style, nor anyone else’s, was also loving the exhibit (for which details regarding costs, schedules and reservations can be found by accessing “Bob Ross Experience” on the Internet).

Patty was there because her late husband, also named Bob, had been a devotee of Ross.

Bob Wilson, my late brother-in-law, had navigated a tough, challenging childhood to grow to manhood, but did so with his artistic spirit left intact. An enthusiastic golfer and bowler, one day he surprised her by carrying paints, brushes and Bob Ross instructional books into their basement, then began to paint.

“It was just him, with himself, and he really loved it,” Patty recalled. “That was so out of character for him. I think he found something in himself doing that … he really did.”

In several ways, both Bobs were similar: quiet, laidback, sincere. Between those traits and the painting, a bond was formed, one you can bet was multiplied countless times with viewers over the show’s run.

“He was very important to my husband,” Patty said of Ross.

Having visited the studio where the artist, his show and so many other people’s dreams came to fruition in brush strokes on plain white canvases, she found this little studio was now equally important to her.

“Such a small place,” Patty reflected, after her visit. “And such a huge impact.”