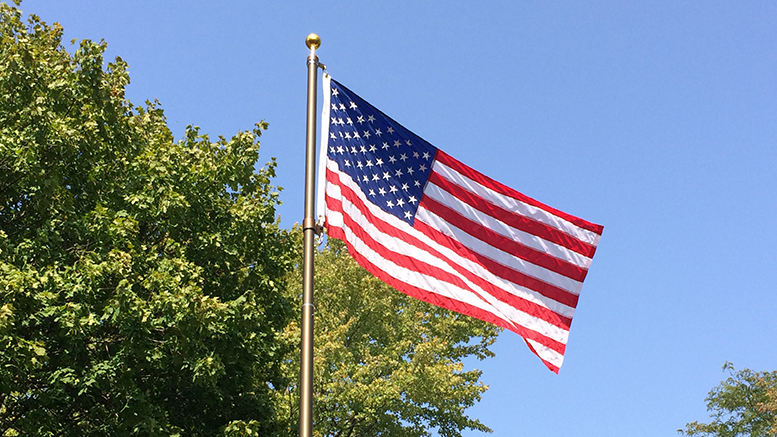 Our American flag waving under an azure sky is a beautiful sight indeed. Photo by Nancy Carlson

For our birthdays, my wife and I gave each other a flagpole.

A flagpole is one of those gifts a couple gives one another when they have everything they need, plus way too much of what they don’t need.

Oh, sure, there are those fantasy gifts you’d love but know you’ll never receive. I suppose for Nancy that’d be a magical time/travel machine that put her in a first-class booking on Viking River Cruises whenever she clicked her heels.

For me? Maybe it’d be a fully aerobatic airplane like an Extra 300, the joke being you can buy yourself one, assuming you have an extra three-hundred-thousand dollars sitting around the house.

Last time I checked, we didn’t … so a flagpole it is.

Early on we decided nothing is going to fly up that flagpole but the American flag, the Stars and Stripes, Old Glory …

Had I ever served in the military I would think differently. A Marine Corps, Army, Air Force, Navy or Coast Guard flag beneath it would be fine. But I didn’t serve in the military, so that was a no-go. Nor did I ever do anything heroic, like work as a policeman, fireman or other first-responder, nor labor to make life better for my fellow citizens by volunteering under the auspices of some government aid program.

All I’ve ever done for my country is pay my taxes.

While I like Indiana just fine, I don’t feel compelled to run a state flag up the staff, either, and likely won’t, unless maybe our Legislature sticks a breaded tenderloin on it.

Which, in my opinion, would look pretty cool.

As for flags promoting our college alma maters and such, that doesn’t do it for me.

So for us, it’s the American flag.

I’d guess I was in junior high school when my Dad bought a flagpole. Earlier he’d instilled a love of our country in my kid sister and me. Our first place was a starter home, small and boxy and affordable with the help of a GI loan, one built to house the millions of young veterans who returned from World War ll to start families like ours. Having splurged on a console stereo, Dad would put on an album of John Philip Sousa marches, to which Patty and I strutted around our living room as he kept cadence.

I’m not sure what today’s kids would make of that as a source of riotous entertainment, but I can guess. We thought it was great fun, though.

While not large, our second house was constructed of classic brick, bordered with green shrubs out front and some interesting trees in back. The addition of Dad’s flagpole completed a perfect picture.

Appearances had nothing to do with his buying it, though.

If Dad was anything he was a patriot, though a quiet one, not the mouthy type. While physically able he ran the Stars and Stripes up that flag pole every morning and brought it back down every evening, folding, then stowing it in our front closet. When his grandkids came to visit, he led a troop of granddaughters and one grandson into the yard, hoisting his flag up the pole while little hands were lifted in haphazard but heartfelt salutes.

The American flag, we all felt, was imbued with a degree of magic.

Which, by the way, we still do. That’s one thing that surprised me about buying our flagpole – how much it delighted us to do so. As the day of its installation neared we grew more excited, smiling broadly the first time our new flag flew from it. Six weeks later it still elicits happy smiles, flapping in a stiff breeze against a background of trees under a lovely blue sky.

To me it’s an uncommonly beautiful sight, one I hope remains for uncounted generations of Americans to come.

In hoping for that, though, I can’t fight growing feelings of trepidation. These are starting to feel like extraordinarily dangerous times. The COVID-19 pandemic doesn’t help the general mood, of course. But the dissatisfaction, mistrust and downright hatred exhibited among Americans today makes me wonder what our future holds.

You want hate? I hate that. If you can see a new photo of an auditorium filled with Americans raising their arms in salute like Germans in the 1930s and not feel a chill shoot down your spine … well, it beats me what you’re thinking.

Here’s what I think.

Most of us truly believe the United States of America is special. For centuries it’s been a beacon of hope, a place where your opinions may differ from others.  With rare exceptions, that’s not going to get a cross burned in your yard, or swastikas waved on your street.

If that changes, we’ve lost everything.

I prefer the America that helps feed the hungry, our own and the world’s, the America embodied in the Statue of Liberty, the America that set our flag on the moon in the hands of astronaut Neil Armstrong.  It’s also the America represented by Harold Keller, Harold Schultz, Ira Hayes, Harlon Block, Franklin Sousley and Michael Strank.

Do those names ring a bell with you?

They were the five Marines and one Navy medical corpsman who raised our flag on Mount Suribachi during the battle for Iwo Jima, as immortalized in Sgt. Bill Rosenthal’s photograph. It’s an unforgettable image, as you well know, one captured as they worked toward a common goal under the worst of circumstances. The image is redolent of bravery and selflessness, sacrifice and unity, impressions confirmed by the photo’s after-story.

Block, Sousley and Strank never made it off that island.

They died fighting for our country.

When looking at our flag, theirs is the America I see, feel and, most of all, honor. I just pray to God it stays that way.