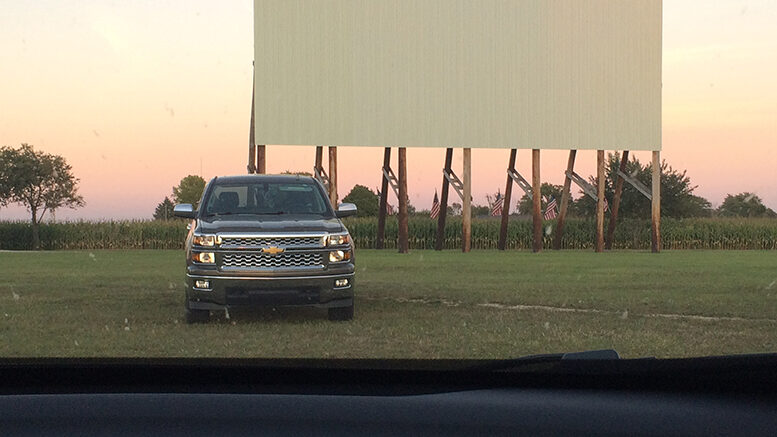 It’s blank now, but once the sun sets the drive-in’s screen will come alive with the characters from “Grease.” Photo by Nancy Carlson

As a kid I never went to drive-in movies. This was because we were conservative Baptists who believed Hollywood movies were the breeding ground of perverts and sexpots.

Our chief fear, though, was that you’d chance going to the drive-in and, just your luck, Jesus would pick right then to return to Earth, leaving you caught in some steamy sin-wagon while drooling over a lusty scene from, say, ”Old Yeller.”

Then where would you be, huh?

Nevertheless, Nancy and I did take the kids to the Ski-Hi Drive-in a time or two way back in The Dark Ages, but that was about it … until recently.

Then she decided it’d be fun to go to a drive-in again, given the fact that COVID-19 had shut down the regular Muncie movie theater we’d once patronized. Of course, there being no drive-in left in Delaware County, we were forced to travel to one.

Hummel Drive-In Theatre was in a field a mile or two east of Winchester. There were two big screens, one on either end, steadied by stout wooden scaffolding and with a snack stand handily located between them. Luckily we were upwind of that snack stand, which served what I consider the building blocks of good nutrition, those being bacon cheeseburgers and chili-cheese dogs. Smelling them grilling would’ve driven me nuts.

That’s because this level of food service was in marked contrast to my limited drive-in experience from the old days. Back then, all Nancy, the kids and I had to snack on was whatever critter I’d happened to trap in the crick out back.

As it was, this time Nancy had loaded up on snacks. We brought cold Cokes, popcorn and little containers of Goldfish crackers which, I was dismayed to note, totaled about a hundred-thousand calories in each. Plus we had Junior Mints and Milk Duds, as well as doggie treats for our pooch Jersey, who was attending her very first movie.

Besides the food, another thing that was different was the parking. Those straight ranks of posts cradling speakers were long gone, replaced by an FM radio frequency you tuned into. Consequently, you could park any old which-way, the only stipulation being to maintain ten feet of social distancing between vehicles. The effect was, the place looked kind of like the site of a demolition derby before the drivers started slamming into each other.

Yet it was a mellow and friendly scene.

This, I am sure, was because despite endless reports to the contrary, most people remain mellow and friendly themselves. But it also didn’t hurt that Hummel has a strict no-booze policy. It’s not like some poor kid had the unenviable job of checking your breath when you drove onto the lot, but if you got ripped, and you got caught, you got bounced.

One particularly nice thing about the drive-in was, once we were parked, Nancy and I had the opportunity to sit back and catch up on meaningful conversation for a half-hour. I looked at her. “Whadaya think?” I asked. She looked my way. “Beats me,” she answered. That left us twenty-nine minutes and fifty seconds for inhaling handfuls of Junior Mints and Milk Duds until Mother Nature finally dimmed her lights.

I don’t know if Hollywood is even making movies during these crazy coronavirus pandemic days. Maybe it’s not. One benefit of that, however, is you’re not going to waste a small wad of cash seeing some lousy new movie, since chances are whatever you see, you’ve already seen it.  In our case, it was a favorite – “Grease.” 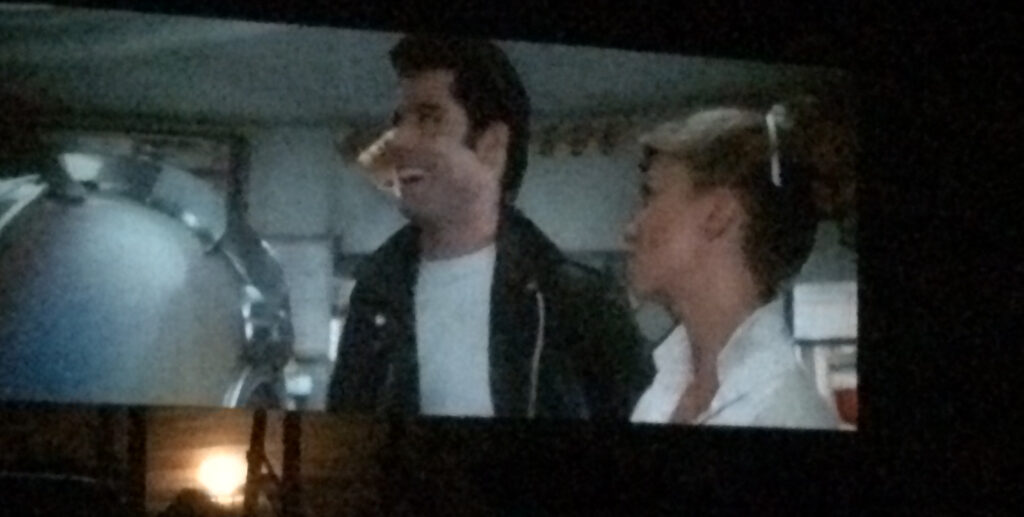 As the full moon appears in the nighttime sky, the cast of ‘Grease’ does, too.

Looking quite impressive up there on the big outdoor screen, the film served as a reminder of the common road map of American romance. First, Sandy and Danny reveled in the innocence of newfound love. Then Danny proved he was a normal American male by acting like a jackass. Then Sandy told Danny where he could stick it. Then Danny, realizing how stupid he’d been, started groveling like some lovesick lapdog to get Sandy back. But there’s more. There was also the dance contest featuring Danny, Sandy and that two-bit floozy Cha Cha DeGregorio. Then Rizzo got preggers. Then it turned out Rizzo didn’t get preggers. Then Danny thumped Leo, a.k.a. Crater Face, in the dramatic climactic car race scene.

And then there was the last scene. It’s the one where Sandy, who’s been acting like a teenage combination of Mother Teresa and Grandma Moses all movie long, shows up at the school carnival wearing sprayed-on leathers and sexy shoes while saucily toking on a Marlboro.

Now I’ve got to admit, between seeing Sandy in sprayed-on leathers and Cha Cha’s eye-catching keister working overtime during the dance contest scene, my inner demon had begun to consider sprouting horns. Momentarily I wondered, were the Baptists correct? Was I a pervert? Even worse, was I a sexpot?

But then I thought, naaah.

Now I’m wishing Delaware County had a drive-in movie theatre, too, and wondering what the chances are of ever getting another one.