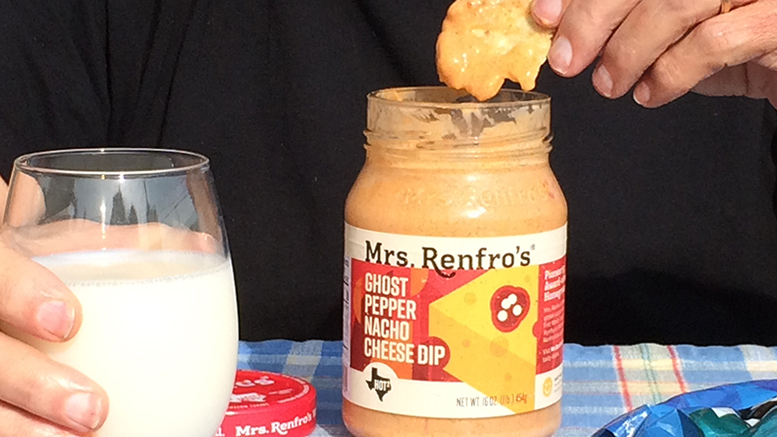 Scooping some of this stuff onto your nachos quickly gets your mouth’s attention. Photo by: Nancy Carlson

What is it about fiery food that makes some of us consider eating it a personal challenge?

Beats me how many times I’ve entered restaurants anticipating a pleasant, filling but ultimately dull meal. Then something on the menu strikes me like a duelist’s slap across the face, daring me to try it unless I’m some kind of little wussy boy.

Then, despite being some kind of little wussy boy, I do try it.

The first time I remember succumbing to this self-imposed pressure was while packed around a table filled with family members at a popular sports bar. Noting the menu’s chicken wings were rated from something like “mild” to “you’re gonna wish you were dead,” I laughed derisively at such hyperbole and ordered the latter.

Ten minutes later, I wished I were dead.

With two mammoth swallows I downed my beer. Then I downed everybody else’s beer. Then I downed all the waters. Then I started yanking sippy-cups of milk from the hands of bawling babies, sneering “Gimme that, ya little brat!” before making tearful, distressing, bovine noises until my mouth finally cooled off an hour later.

Let’s just say I had learned my lesson … for about a week.

In my case, I liken this fiery food fascination to proverbially darting across the road in front of dangerous culinary traffic just for kicks, but it may simply amount to rebelling against genetics. Nobody hated fiery food like my father. Given the merest whiff of food-borne heat he’d clam up like, you know, a clam. Dad could smell Tabasco sauce from twenty feet away, through an unopened bottle, and it filled him with foreboding and loathing.

In his defense, I think he recognized this as a shortcoming. It was one he blamed on an Asian dinner years earlier, when he unwittingly gorged himself on something loaded with a spice that turned so viciously hot, his taste buds later needed skin grafts.

Well, that’s what he claimed …

Initially, I blamed all this on his mild Swedish DNA. We Swedes are pickled herring munchers, not hot-food daredevils.

But then my brother-from-another-mother, Peter Sandblom, and his wife Lisa sent me an elixir in the form of Mrs. Renfro’s Ghost Pepper Nacho Dip. Being from the Old Country himself, Peter  wouldn’t have surprised me had he mailed some lutefisk, the national Swedish fish dish which loosely translates as “food that makes Americans wanna barf.”

It offered some major-league heat.

In commenting on its ghost-peppery nature, Peter also noted how danged delicious it was. Now, just how danged delicious it was would be the last thing on the mind of some wimpy hypochondriac afraid of suffering a few third-degree lip burns in the noble quest for great nacho dip. But Peter? He dared to try it and was right! Mrs. Renfro’s dip was delicious, even if I did have to drink milk between every two or three nachos to tolerate it.

Of course, as hinted by my Dad’s scorched taste buds, willingness to try hot food can be the price you pay for experiencing any number of ethnic dishes.

You want Mexican? OK, I’m a big fan of it around here, and suffer an outright addiction to Pollo Toluca, which is grilled, pounded chicken breast topped with cheese sauce and chorizo sausage.  When my addiction flares up, I’ve considered running Pollo Toluca through the blender then injecting it directly into my veins, except the cheese would probably gum them up. Still, I have yet to encounter a Mexican dish up here in Muncie that I imagined could match the traditional heat of its cousins south of the border.

How hot can that stuff get? To judge, I simply employ the IFMS, short for the International Frozen Margarita Standard.

But if I order a jumbo frozen margarita to counteract my majorly overheated salsa, it’s because I need to stick my whole face in the glass.

Other hot stuff? There’s Indian and Thai food, to name two. Hand me an Indian or Thai menu, and the items that spring to my attention always feature little red pepper warning logos alongside them. While there’s mild Indian and Thai food to coddle the tamest of tastes, folks like me are happiest when using the napkin to wipe our forehead, not our mouth.

When eating fiery stuff, my late newspaper hero Dick Stodghill always comes to mind. There was much to admire about Stodg, including his service as an infantryman in World War ll, his later employment as a Pinkerton detective, and the unmatched skill with the written word he honed when he settled into writing as a profession.

But his taste in fiery food also stood as an example for those of us who like our victuals just a little bit intimidating, a little bit scary. It may seem counterintuitive, but it’s a fairly common trait among fiery food fans.

Stodg was happiest when the heat from the food he favored left him in tears.