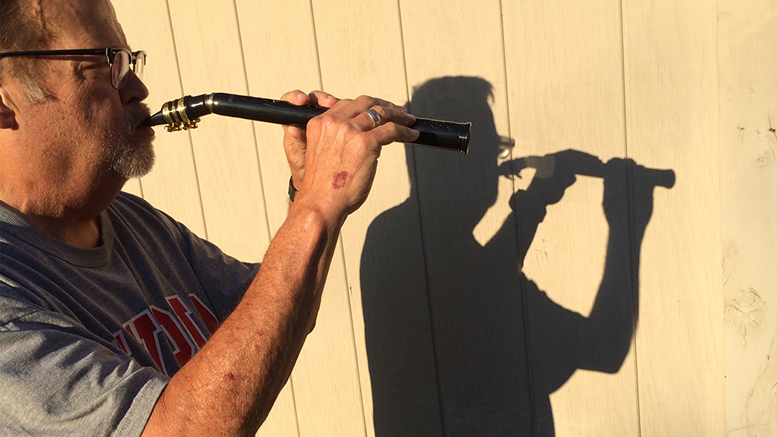 Sadly, playing a mini-saxophone will probably be much harder than you think. Photo by Nancy Carlson

There was a time in my early adulthood when I fancied myself a future singer-songwriter, someone on the order of Gordon Lightfoot or Paul Simon.

Then one day, the hard truth dawned on me: In my noble, artistic quest to become a sensitive, idealistic, highly paid professional troubadour whom women pelted on stage with their underwear, I’d bought and sold five guitars without managing to learn a single chord. Plus the noise erupting from my mouth whenever I sang was a dead ringer for the sound stallions make when they’re being converted into geldings.

This explains why I recently spent fifty bucks for a mini-saxophone.

After all, between the ages of ten and fifteen, I had taken private sax lessons. Oh sure, initially I was bitter because I wanted to play a cooler instrument like the bongos. Nevertheless, after only two years I got good enough that my parents’ quit glaring at me while sharpening their steak knives whenever I was practicing.

Now in my waning years, I wished to make such music again.

Unlike during my revolving-door guitar days, on the sax I could play as many as twenty or thirty different notes. Even more impressive, some of those notes could actually be arranged into edgy Baptist youth group mega-hits, like “Jesus Wants Me For A Sunbeam.”

It was with that memory in mind that I anxiously awaited the arrival of my mini-sax. Within five minutes of its delivery, I figured my skill-set of six decades earlier would magically return in full, and I’d be tooting tunes easy as if it were a kazoo.

At least, I hoped it would be easy as a kazoo.

My preferred musical genre having expanded along with my age and my waistline, I could just imagine rocking my exciting new mini-sax set list. “Roadhouse Blues.” “Gimme Shelter.” “Why Don’t We Do It In The Road.” Well, that or maybe, “Eleanor Rigby.”

No song would be beyond my reach as a masterful mini-sax man!

Then my mini-sax arrived and, upon opening its box, I suffered my first shock. This thing looked way more complicated than a kazoo. You even had to put the major parts together like a real sax. My second shock came from noting that none of the major parts was one of those slide thingees like they stick on kids’ whistles. My third shock was finding a little box stuffed into the big box, inside of which were reeds.

This presented a serious conundrum. The good news was with time, dedication and dogged practice, I could eventually anticipate playing along with the late Bobby Keys’ awesome sax solo on The Rolling Stones’ classic hit “Brown Sugar.”

The bad news was, there was no way I’d live anywhere near that long.

This had become obvious after laboriously piecing my mini-sax together and attaching a reed to the mouthpiece. Having carefully placed my fingers on the note holes, I let fly an exploratory toot.

What came out was … nothing.

This reminded me that in the time since my sax-playing youth, I had managed to work in about twenty years of smoking two or three packs of cigarettes a day before eschewing the evil weed. So working up a second gigantic gulp of breath, I tried it again.

“Honk!” blurted out its end, as if I’d just assaulted a goose.

This being a singularly unpleasant sound, I rearranged my fingers on different note holes and blew another mighty, exploratory toot.

“Honk!” blurted out its end, as if I’d just assaulted the same goose again.

In fact, for the next twenty minutes, no matter how many different ways I rearranged my fingers, the very same “Honk!” erupted.

By now I knew that poor goose had to be pissed off, to say nothing of Nancy trying to read in the next room over. I couldn’t even imagine how sick she was of my woeful racket. After fishing my single page instruction sheet from the box, I looked up the mini-sax’s tutorial website, but somehow couldn’t access it.

For another thing, there were some illustrated fingerings that apparently required the player to be born with six fingers on each hand. And the names of one’s fingers was confusing, too. Like, I knew which finger the forefinger was. Ditto for the medius, though I’d always called it by a somewhat earthier moniker.

But what the heck was a Binky? And did I, a nearly seventy-year-old man, have a Binky?

I hoped to heck not.

Anyway, that day’s practice ended with the discouraging knowledge that the only song my sole note possibly qualified me to play at this time was the late Frank Zappa’s “Duck Duck Goose.”

But I’m no quitter. Well, except when it comes to guitars. Then, yeah, I’m a quitter.

However, I’m hoping to have “Jesus Wants Me For A Sunbeam” mastered on the mini-sax by the time I turn eighty.